The Tomica Hero Series (トミカヒーローシリーズ, Tomika Hīrō Shirīzu) was a short-lived series of Japanese tokusatsu children's television dramas. Based on Takara Tomy's Tomica toy car line, the series air on TV Aichi and TV Tokyo before being syndicated around Japan. Takara Tomy previously produced Madan Senki Ryukendo , [1] but Ryukendo was not based on a pre-existing set of toys for the company. However, it made reference to the Earth Federation which the UFDA is a branch of, its main cast making a cameo in the Rescue Force movie. Although airing on different days, the Tomica Hero Series served as competition to TV Asahi and Toei Company's Super Sentai and Kamen Rider Series and Tsuburaya Productions' Ultra Series. Only two series were made with the Tomica Hero story, which concluded with a stage show featuring members of the Rescue Force cast.

The Transformers is a line of mecha toys produced by Japanese company Takara and American toy company Hasbro. Initially a line of transforming mecha toys rebranded from Takara's Diaclone and Microman toylines, it spawned the Transformers media franchise.

Zoids is a science fiction media franchise created by Tomy that feature giant robots called "Zoids". A Zoid is essentially a large mechanical animal, with designs being based on animals; including dinosaurs, insects, arachnids and mythological creatures.

Takara Co., Ltd. (株式会社タカラ) was a Japanese toy company founded in 1955. In March 2006, the company merged with Tomy Co., Ltd. to form Takara Tomy. The Takara motto was 遊びは文化」("playing is culture").

Tomy Company, Ltd. is a Japanese entertainment company that makes children's toys and merchandise. It was created from a merger on 1 March 2006 of two companies: Tomy and long-time rival Takara. The company has its headquarters in Katsushika, Tokyo.

Tomica is the line of die-cast toy vehicles produced since 1970 by Takara Tomy Co. of Japan. Ostensibly, Tomica diecast were an outgrowth of Tomica World, an autonomous toy line of motorized train accessories that Tomy had created based on Plarail and produced since 1959. Similar in concept, Tomica can be thought of as the Matchbox of Japan - but focuses mainly on Japanese brands.

Tomica Hero: Rescue Force is a Japanese tokusatsu television series that began airing April 5, 2008, on TV Aichi. It is the first Tomica Hero series based on Takara Tomy's Tomica toy car line. The characters use Tomica's Super Tools and Super Vehicles to help save people from Super-Disasters and battle the evil causing them. It is the second tokusatsu series that Takara Tomy has been involved in following Madan Senki Ryukendo. It is directed by Masato Tsujino, and written by Shinichi Inotsume and Hiroyuki Kawasaki, the same team behind Ryukendo. A film for Tomica Hero: Rescue Force was released in December 2008. 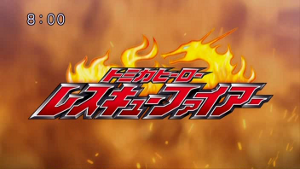 Tomica Hero: Rescue Fire is a Japanese tokusatsu television series based on Takara Tomy's Tomica toy car line. A sequel to Tomica Hero: Rescue Force, Rescue Fire tells of another branch of the United Fire-Defense Agency that helps save people from Super-Fire created by demons seeking to make people suffer. This series marks the beginning as well as an end of a program franchise dubbed the Tomica Hero Series. The Tomica Hero story was concluded in the special stage production Nissan Haul Special Live Stage FINAL that featured the return of Obuchi, a new R4, and the return of the original R4.

Plarail, pronounced in English as Play rail is a toy train and plastic track system made by Tomy and introduced in Japan in 1959. It was expanded into a battery-operated electric toy train system in October 1961. Plarail is not compatible with most other brands of model railway, although as it has a similar rail gauge to the wooden toy train systems, rolling stock may run on both systems to some degree.

Rey is a Japanese band who signed onto the Lantis label in 2008. They are described as the "real anison band" for their performances of anime theme songs. Front man Kenta Harada claims that their band's name comes from both Hironobu Kageyama's band Lazy and the anime character Rei Ayanami. The group's debut single under Lantis was used as the first ending theme of Tomica Hero: Rescue Fire. Rey was also included on Lantis's compilation album Gundam Tribute from Lantis, covering "Stand Up to the Victory", the first opening theme for Mobile Suit V Gundam. The band broke up as on August 31, 2013.

WIXOSS is a Japanese multimedia franchise produced as a collaboration between Takara Tomy, J.C.Staff, and Warner Entertainment Japan. The franchise revolves around the eponymous trading card game and follows girls known as Selectors who battle against each other in order to have their wishes granted. The trading card game by Takara Tomy launched in Japan in April 2014. An anime television series by J.C.Staff, titled selector infected WIXOSS, aired in Japan between April and June 2014, with a second season, selector spread WIXOSS, airing between October and December 2014. A compilation film, titled selector destructed WIXOSS, was released on February 13, 2016. A sequel anime series, titled Lostorage incited WIXOSS, began airing in October 2016. A new anime TV series titled Lostorage conflated WIXOSS, began airing in April 2018. Several manga spin-offs, a novelisation, and a smartphone app have also been produced.

Shinkansen Henkei Robo Shinkalion is a Japanese toy franchise created by Takara Tomy, in association with the Japan Railways Group. It is a spin-off of the long-running Plarail model train franchise, with the toys first launched back at March 16, 2015. An anime adaptation by OLM, Inc. aired in all JNN stations in Japan from January 6, 2018, to June 29, 2019.

Tomica Hyper Rescue Drive Head Kidō Kyūkyū Keisatsu is a Japanese anime television series made to promote Takara Tomy's long-running Tomica toyline of miniature toy cars. It replaced Kamiwaza Wanda and aired Saturday mornings at 7:00 am on the new hour-long Anisata block on TBS and affiliated stations. The original series aired from April 15, 2017 to December 23 of the same year, while 2018 featured a monthly 8 episode follow-up. A feature film was released a week later, tying it in with its concurrently airing successor series, Shinkansen Henkei Robo Shinkalion, with main character Hayato Hayasugi crossing over with the E5 Hayabusa.

The Girls × Heroine! Series is a Japanese Tokusatsu series produced by TV Tokyo, Dentsu, OLM, Inc. and created by Takashi Miike. Each season revolves around magical girls who fight against enemies. The series began on April 2, 2017, with Idol × Warrior Miracle Tunes!. Each series sells toys produced by Takara Tomy. The most recent season began airing on April 1, 2018, with Magical × Heroine Magimajo Pures! and announced its three-season Secret × Heroine Phantomirage!, which started airing on April 7, 2019.