Tomie: The Final Chapter – Forbidden Fruit (富江 ・最終章～禁断の果実～) is a 2002 Japanese horror film directed by Shun Nakahara. [1] It is the fourth installment of the Tomie film series, based on an eponymous manga by Junji Ito.

Tomie Hashimoto is a dreamy teen who writes homoerotic horror fiction in which she imagines herself as Ann Bathory, a vampire. Introspective and lonely, she is picked on and bullied by her classmates at school, and lives alone with her loving, yet distant widower father, Kazuhiko Hashimoto. One day, while admiring an ornate jewel encrusted cross necklace in an antiquities shop, Tomie meets a strange, beautiful girl with a mole under her left eye. The mysterious stranger says her name is Tomie Kawakami. The girls become best friends (with heavy lesbian undertones) and Tomie H. dedicates the character of Mary from her fanfiction to her new friend, but it soon becomes clear that the two girls meeting each other was not purely accidental. Tomie Kawakami has an agenda, and it involves Tomie's father.

It is revealed Kazuhiko was involved in a relationship with Tomie many years ago which resulted in her being murdered. However, Kazuhiko was still obsessed with Tomie and even named his own daughter after her. Tomie is back to terrorize his family and tries to convince Kazuhiko to murder his daughter. Kazuhiko ends up murdering and decapitating the other Tomie, and throws her head into a nearby river. His daughter, Tomie Hashimoto discovers the talking head and nurses Kawakami back to health as she regenerates. She spends a lot of time cooking and taking care of her but after a brief argument between the two, Tomie Hashimoto ends up throwing the regenerating Tomie body off a building.

Soon afterwards, Tomie Kawakami shows up at her front porch and Tomie H. shoots her with an arrow, killing her. She and her father freeze Tomie into a block of ice to prevent her from regenerating and coming back to life, but after hearing the frozen Tomie's pleas and cries Kazuhiko breaks the block of ice and sets Tomie free. Tomie Kawakami then attacks his daughter, but gets hit in the head by her, which results in Kazuhiko locking his daughter into a freezer room. Tomie laughs as she and Kazuhiko walk away, holding hands. The next morning, Tomie Hashimoto is discovered by a worker from the ice sculpture company who saves her life.

Tomie Hashimoto is now shown living alone, with her father missing, albeit thankful because she believes he tried to save her from the other Tomie, which is the reason he teamed up with her and abandoned his daughter. Tomie goes to her room and continues writing her fiction, finishing it with, "Ann and Mary are friends again; there will be no issues this time. Ann will raise her to be a real friend, a friend whom she can depend on."

Tomie then opens her desk drawer and looks at a dismembered, regenerating ear. 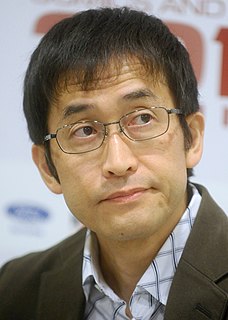 Ultraman Dyna is a Japanese tokusatsu TV show which aired from 5 September 1997 until 28 August 1998. It is a direct sequel to the previous Ultraman series, Ultraman Tiga and the 13th entry to the Ultra Series.

Tomie is a Japanese horror manga series written and illustrated by Junji Ito. Tomie was Ito's first published work he originally submitted to Monthly Halloween, a shōjo magazine in 1987, which led to him winning the Kazuo Umezu award. 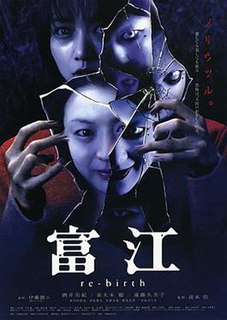 Tomie: Beginning is a 2005 Japanese horror film directed by Ataru Oikawa and the fifth installment of the Tomie film series, serving as a direct prequel to the 1999 film Tomie, with Kenji Mizuhashi reprising his role as Kenichi Yamamoto. 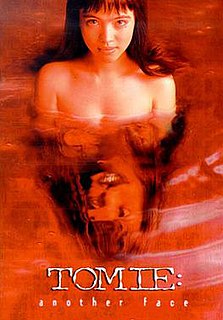 Tomie: Replay is a 2000 Japanese horror film directed by Fujirō Mitsuishi. It is the second installment of the Tomie film series, based on a manga of the same name by Junji Ito, specifically the Basement chapter.

Konatsu (向夏) is a Japanese pink film actress. She has appeared in award-winning pink films, and was herself given a "Best Actress" award for her work in this genre in 2005.

Tomie Unlimited is a 2011 Japanese psychological-body horror film directed by Noboru Iguchi and the eighth installment and reboot of the Tomie film series. 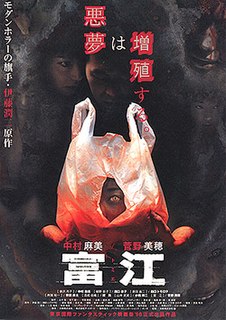 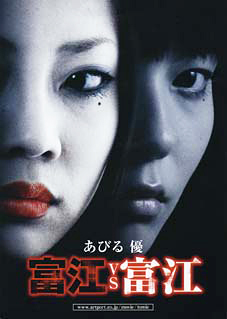 The Fruit of Grisaia is a Japanese adult visual novel, the first in a series of visual novels by Front Wing, with character designs by Akio Watanabe and Fumio. It was released in February 2011 for Windows, and it was later ported to the PlayStation Portable and PlayStation Vita. Two sequel visual novels were also produced for Windows: The Labyrinth of Grisaia in February 2012 and The Eden of Grisaia in May 2013. The three games have been licensed in English and published worldwide by Sekai Project in 2015. There have been two manga adaptations published by Akita Shoten and Mag Garden. A 13-episode anime television series animated by Eight Bit and produced by NBCUniversal aired in Japan from October to December 2014. Subsequently, anime adaptations of the two sequel games aired between April and June 2015. An anime film adaptation of Grisaia: Phantom Trigger premiered on March 15, 2019. A sequel to the film titled Grisaia: Phantom Trigger the Animation Stargazer premiered on November 27, 2020.

Cross Ange: Rondo of Angel and Dragon, also known as simply Cross Ange is a Japanese mecha anime television series produced by Sunrise and aired from October 2014 to March 2015. A manga adaptation began publication in August 2014.

Takahiro Miura is a Japanese actor. He graduated from Juntendo University Sports Health Science Department. He is represented with Anoré. His father is Tomokazu Miura who is also an actor, his mother is actress and former singer Momoe Yamaguchi, and his brother is singer-songwriter and actor Yutaro Miura.