Tomiko Satō (佐藤 富子, Satō Tomiko, 1894–1995) was the common-law wife of the Chinese Communist scholar and poet Guo Moruo. She is often referred to in Chinese sources as Guo Anna (Chinese :郭安娜), the way Guo Moruo called her. [3] Satō Tomiko spent about 20 years with Guo, in Japan and in China, until they were separated by the war, and they had five children together. [3]

Tomiko Satō was the eldest of eight children in the family of a Japanese Protestant minister in the Ohira village, Kurokawa District, Miyagi Prefecture (north-eastern Honshū). In her teens she studied at a Baptist boarding school in Sendai, the capital of the prefecture. At 21, rebelling against the prospect of an arranged marriage, she left her home prefecture and went to Tokyo, where she found a job with St Luke's Hospital as a student nurse. [3]

Satō's relationship with Guo Moruo started in the summer of 1916, about a year after her arrival to Tokyo. A friend of Guo, named Chen Longji (陈龙骥), [4] happened to be treated for tuberculosis at St Luke's Hospital. Guo, who had just completed his first year of study in Japan, visited his sick friend in the hospital on his trip to Tokyo, but the patient died soon. After the death of his friend, Guo met her when visiting the hospital to request the dead friend's X-ray records. Satō was sharing Guo's grief over the death of his friend, and once Guo returned to Okayama, they started regularly exchange letters. By December, Guo Moruo convinced Satō to leave Tokyo and join him in Okayama. [5]

Satō and Guo's union was vehemently opposed by both of their families, and ill-received by the community they were in.

In April 1923, Satō moved with Guo and their three children to Shanghai. They had financial difficulties, and in February 1924 she went to Japan, taking the children along, but returned to Shanghai in mid-November. [5] Guo was very active in the Communist underground movement. The Nationalist Government put out an arrest warrant for Guo in 1928. He escaped to Japan again and lived with Sato for 10 years. But they were under constant Japanese surveillance.

After the Marco Polo Bridge Incident in July 1937, the war between China and Japan started in earnest. On July 25, Guo managed to escape Japan and to return to China where his arrest warrant was rescinded. As his attempts to get Sato and their children out of Japan later that year were frustrated by the Japanese government, she was left alone to take care of the children in wartime Japan. She had little money and lived a marginal life with the children. She resisted the pressure of the authorities to have them naturalized as Japanese citizens; this protected them from the prospect of being conscripted and possibly sent to fight against their father's country. The four elder children were able to enter Kyoto Imperial University; all graduated, and became specialists in industrial chemistry, aquaculture, architecture, and mathematics. [3] The youngest child was educated at Qinghua University in Beijing.

After WWII she tried to contact Guo. He avoided all attempts to meet. She discovered that he took another wife and had several more children. She wrote long letters to his close friends whom she knew from their earlier years. In 1949 Chou En-Lai arranged for her to live in Dalian, China. She became a Chinese citizen. In 1983 she was appointed to the Sixth CPPCC National Committee and served consecutively thereafter. She finally saw Guo Moruo for the last time shortly before he died in 1978 in his hospital. [6]

When interviewed in 1980 by Sawachi Hisae  [ ja ], who was to write her biography, [7] Satō summarized her life story as follows: "I am a stray dog all my life, but whatever bitterness can be said about this bitter life, that was because of my own foolishness". She died in 1995, aged 101. [8]

All her children achieved successful lives in China.

Shen Yinmo was a Chinese poet and calligrapher.

Satō is the most common Japanese surname, often romanized as Sato, Satoh or Satou. Notable people with the surname include: 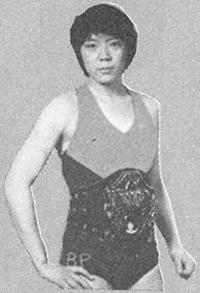 Naoko Satō, better known as Jackie Sato was a professional wrestler from Yokohama, Japan. In the 1970s, while wrestling for All Japan Women's Pro-Wrestling (AJW), she formed the tag team, the Beauty Pair, with Maki Ueda. Following in the steps of Mach Fumiake, the Beauty Pair was part of an important shift in the culture of Japanese women's wrestling, attracting more female fans by becoming pop icons. In their mainstream success, Satō and Ueda paved the way for the even more popular team, the Crush Gals, of the 1980s.

Chiyako Satō was a Japanese singer.

Masaki Satō, born May 7, 1999 in Sapporo, Hokkaido}} is a Japanese pop singer. She is a tenth-generation member of the pop group Morning Musume.

Tomiko is a feminine Japanese given name. Notable people with the name include:

Tatsuo is a masculine Japanese given name. Notable people with the name include:

Creation Quarterly (创造季刊) was a Chinese literary quarterly magazine founded in 1921 and published between 1922 and 1924.

Miki Sato is a Japanese tarento, actress and fashion model.

Chen Mingyuan is a Chinese scholar who works in various disciplines such as linguistics, mathematics, informatics, computer sciences, and modern poetry. On April 23, 1989, Chen gave a speech at Peking University, expressing his support for the student movements and criticisms of the government. This speech was considered a trigger for the later escalation of the student movement in 1989.

Let's Go Crazy on LIVE is a 2019/2020 Taiwanese drama about an ordinary girl who is scouted by a CEO to become a famous influencer.