The tomín (plural tomines, abbreviated t) is an antiquated Spanish unit of weight and currency. It was equivalent to one-eighth of a peso , both in currency and weight, and derived from the Arabic term tomn ("one eighth"). [1]

The peso was a monetary unit that originated in Spain and is now the name of the monetary unit of several countries in the Americas and the Philippines. The silver peso worth eight reales was also known in English as a Spanish dollar or piece of eight and was a widely used international trade coin from the 16th to 19th centuries.

A currency, in the most specific sense is money in any form when in use or circulation as a medium of exchange, especially circulating banknotes and coins. A more general definition is that a currency is a system of money in common use, especially for people in a nation. Under this definition, U.S. dollars (US$), pounds sterling (£), Australian dollars (A$), European euros (€), Russian rubles (₽) and Indian rupees (₹) are examples of currencies. These various currencies are recognized as stores of value and are traded between nations in foreign exchange markets, which determine the relative values of the different currencies. Currencies in this sense are defined by governments, and each type has limited boundaries of acceptance.

Mark may refer to:

The shilling is a unit of currency formerly used in Austria (schilling), the United States, and in the United Kingdom, Australia, New Zealand and other British Commonwealth countries. Currently the shilling is used as a currency in four east African countries: Kenya, Tanzania, Uganda and Somalia. It is also the proposed currency that the east African community plans to introduce . The word shilling comes from old English "Scilling", a monetary term meaning twentieth of a pound, and from the Proto-Germanic root skiljaną meaning 'to separate, split, divide.' The word "Scilling" is mentioned in the earliest recorded Germanic law codes, those of Æthelberht of Kent.

Tael, also known as the tahil and by other names, can refer to any one of several weight measures of the Far East. It usually refers to the Chinese tael, a part of the Chinese system of weights and currency.

Ferdinand I, called the Great, was the Count of Castile from his uncle's death in 1029 and the King of León after defeating his brother-in-law in 1037. According to tradition, he was the first to have himself crowned Emperor of Spain (1056), and his heirs carried on the tradition. He was a younger son of Sancho III of Navarre and Muniadona of Castile, and by his father's will recognised the supremacy of his eldest brother, García Sánchez III of Navarre. While Ferdinand inaugurated the rule of the Navarrese Jiménez dynasty over western Spain, his rise to preeminence among the Christian rulers of the peninsula shifted the locus of power and culture westward after more than a century of Leonese decline. Nevertheless, "[t]he internal consolidation of the realm of León–Castilla under Fernando el Magno and [his queen] Sancha (1037–1065) is a history that remains to be researched and written." 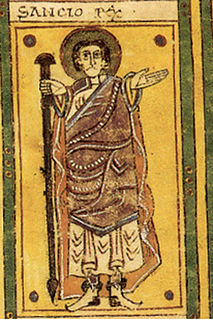 Sancho Garcés II, also known as Sancho II, was King of Pamplona and Count of Aragon from 970 until his death in 994. He was the eldest son of García Sánchez I of Pamplona and Andregoto Galíndez. He recognised the Kingdom of Viguera during his reign.

A Ryō (両) was a gold currency unit in pre-Meiji Japan Shakkanhō system. It was eventually replaced with a system based on the yen. 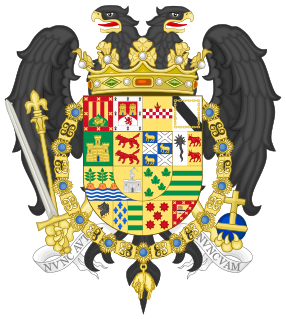 Beltrán Alfonso Osorio y Díez de Rivera, 18th Duke of Alburquerque, was a Grandee of Spain and an amateur jockey. As a Spanish aristocrat, he was known as the "Iron Duke" of Alburquerque.

The pound was the currency of the Kingdom of Lombardy-Venetia.

Spain competed at the 1928 Summer Olympics in Amsterdam, Netherlands. 80 competitors, all men, took part in 34 events in 10 sports.

Estadio Juan Ramón Brevé Vargas is a football stadium in Juticalpa, Honduras. It is currently used mostly for football matches and is the home stadium of Juticalpa F.C.. The stadium holds 20,000 people and it was inaugurated on 12 July 2015 in a friendly match between Juticalpa F.C. and C.D. Motagua. 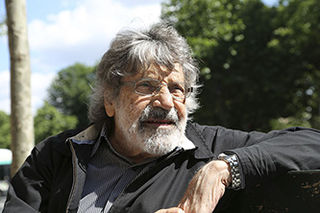 Carlos Cruz-Diez was a Venezuelan artist considered by some to have been "one of the greatest artistic innovators of the 20th century".

Pablo Machín Díez is a Spanish retired footballer who played as a right back, and is the coach of RCD Espanyol.

San Juan F.C. is a football club located in Quimistán, Honduras, that competes in the Liga de Ascenso, the second tier of the Honduran football league system.