Tomioka Castle(富岡城,Tomioka-jō) is a Japanese castle located in Kyūshū. During the 16th century, it was the castle of Terasawa Katataka, a daimyo who played a critical part in repressing the Shimabara Rebellion.

The Shimabara Rebellion was an uprising in what is now Nagasaki Prefecture in southwestern Japan lasting from December 17, 1637, to April 15, 1638, during the Edo period. It largely involved peasants, most of them Catholics. 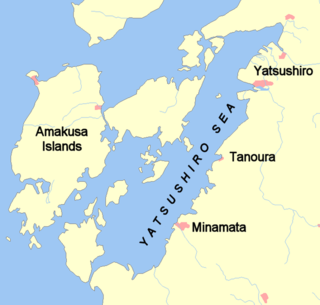 Amakusa (天草), which means "Heaven's Grass," is a series of islands off the west coast of Kyushu, the southernmost of the four main islands of Japan.

Saga Prefecture is a prefecture in the northwest part of the island of Kyushu, Japan. It touches both the Sea of Japan and the Ariake Sea. The western part of the prefecture is a region famous for producing ceramics and porcelain, particularly the towns of Karatsu, Imari, and Arita. The capital is the city of Saga. 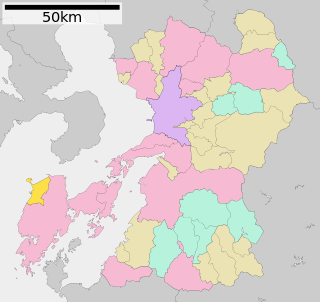 Amakusa is a district located in Kumamoto Prefecture, Japan. 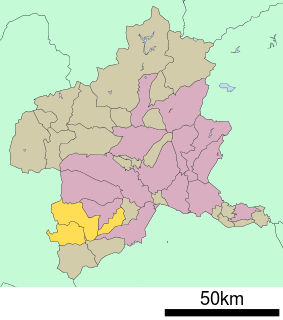 Kanra District is a rural district in Gunma Prefecture, Japan. As of January 2015, the district had an estimated population of 22,972 and an area of 365.82 km², with a population density of 62.8 people per square kilometer.

The Narin Qal'eh or Narin Castle is a mud-brick fort or castle in the town of Meybod, Iran. Structures like these constituted the government stronghold in some of the older (pre-Islamic) towns of central Iran. Some of these castles incorporate mud bricks of the Medes period and of the Achaemenid and Sassanid dynasties.

Tomioka may refer to:

Keikyū Tomioka Station is a railway station operated by the Keikyū Keikyū Main Line located in Kanazawa-ku, Yokohama, Kanagawa Prefecture, Japan. It is located 36.7 rail kilometers from the northern terminus of the Keikyū Main Line at Shinagawa Station, in Tokyo.

Hara Castle was a Japanese castle in Hizen Province. During the Shimabara Rebellion (1637–1638), rebellious peasants were besieged there. 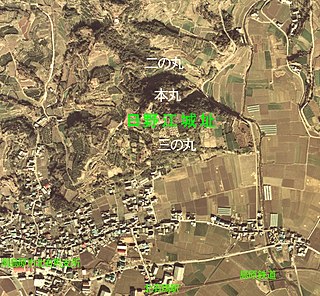 Hinoe Castle is a castle located in Minamishimabara, Nagasaki Prefecture, Japan. The castle was originally built in the 13th century. It belonged to the Arima clan, and was the residence of the Christian daimyō. In 1637, during the Shimabara Rebellion, it was burned down by the forces of the Tokugawa Shogunate. The castle's ruins can still be seen. 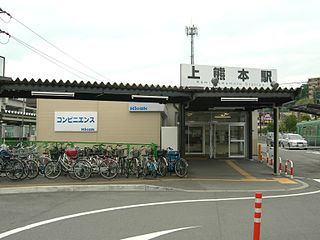 Kami-Kumamoto Station is a railway station in Nishi-ku, Kumamoto, Japan. It is on the Kagoshima Main Line of JR Kyushu and the Kikuchi Line of Kumamoto Electric Railway. In front of the station is a tram stop of the tram operated by Kumamoto City Transportation Bureau named Kami-Kumamoto-Ekimae Station.

The Siege of Iwatsurugi was fought in the year 1554. The siege was just one of a number of military actions that Shimazu Takahisa had to take against his rebellious kokujin vassals. Iwatsurugi Castle was a castle located near the coast, in the vicinity of modern-day Shigetomi Beach in Aira. During the siege, Ijuin Tadaaki, one of the Shimazu generals, maneuvered five ships to within range and proceeded with an offshore bombardment of the enemy garrison, a few of which were killed. The siege lasted a few weeks until the castle fell.

Ōno Castle is a ruined castle located on Mount Shioji in the northern part of Dazaifu city in Fukuoka Prefecture, Japan. 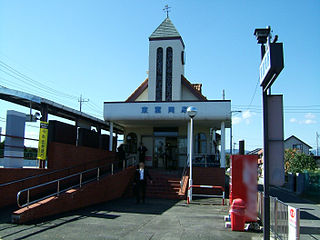 Hitoyoshi is a 12th century castle, now ruins, located in Hitoyoshi, Kumamoto Prefecture. It is recognized as one of Japan's top 100 castles.

Baeolidia harrietae is a species of sea slug, an aeolid nudibranch. It is a marine gastropod mollusc in the family Aeolidiidae.