Dujmović stated playing football in lower league club NK Sava Zagreb where he was noticed by Croatian giants Dinamo Zagreb. But he never managed to get senior cap for Dinamo so he was forced to leave club in 2000. Next six years he played for Croatian yo-yo clubs Hrvatski Dragovoljac, Inter Zaprešić and Međimurje before leaving for Russia in 2006.

Dujmović joined Amkar Perm of Russian Premier League where he soon proved himself as one of the best defensive midfielders in league. After his contract with Amkar expired, Dujmović joined Lokomotiv Moscow where he stayed only for season and half before transferring to Lokomotiv's city rivals Dynamo Moscow for 3 million Euro. Dujmović was a regular first team member in Dynamo, but subsequently lost his place after arrival of new manager Sergei Silkin.

Struggling Spanish La Liga team Real Zaragoza acquired Dujmović on loan from Dinamo Moscow on 17 January 2012. [1] Dujmović had his debut for Zaragoza on 22 January in a game against UD Levante.

Dujmović was called up by Croatian national team manager Slaven Bilić for a friendly game against Liechtenstein in Vinkovci on 14 November 2009. He made his national team debut in the same match, playing 20 minutes as a second-half substitute. Until 2012, Dujmović had been a regular member of Croatia national football team.

FC Lokomotiv Moscow is a Russian football club based in Moscow.

Jerko Leko is a retired Croatian footballer. He primary played as central midfielder, but could also operate as a right one, or more defensively, as a right-back. 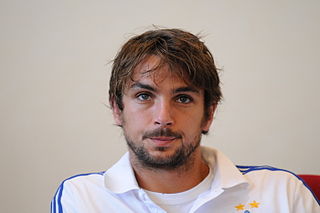 Niko Kranjčar is a former Croatian professional footballer. He primarily played as an attacking midfielder, but could also operate as a winger or second striker. 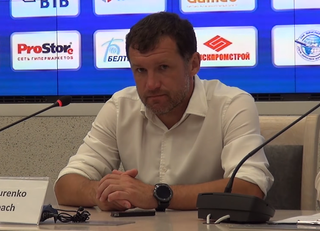 Sergei Gurenko is a Belarusian football coach and a former player.

Senijad Ibričić is a Bosnian footballer who plays as an attacking midfielder for Slovenian club Domžale.

Vedran Ćorluka is a Croatian footballer who plays for and captains Lokomotiv Moscow. He plays as a centre-back, though he has played in other positions across the defensive line, most notably as a right-back.

Gordon Schildenfeld is a Croatian football defender who plays for Anorthosis Famagusta. He played several years for Croatia national team. 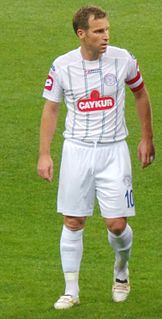 Ognjen Vukojević is a retired Croatian footballer who played as a defensive midfielder. Currently he works as scout for Dynamo Kyiv in Balkan countries and as a manager of the Croatia national under-20 football team.

Domagoj Vida is a Croatian footballer who plays as a defender for Turkish club Beşiktaş and the Croatia national team. He is capable of playing in any defensive position but is mostly deployed as a centre-back or right full-back. His father Rudika is a former football player.

Fatos Bećiraj is a Montenegrin professional footballer who plays as a striker for Maccabi Netanya and the Montenegro national team.

Josip Pivarić is a Croatian football defender who plays for Dynamo Kyiv. 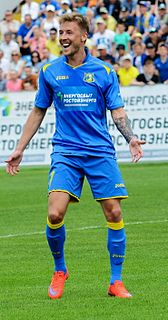 Brian Oladapo Idowu is a Russian-Nigerian professional football player who currently plays as a left-back for Russian club Lokomotiv Moscow and the Nigeria national team.

The 2013–14 FC Anzhi Makhachkala season was the 4th successive season that Anzhi played in the Russian Premier League, the highest tier of football in Russia, in which they suffered relegation after finishing the season in 16th place. They were knocked out of the Russian Cup at the Round of 32 stage by Alania Vladikavkaz, and they reached the Last 16 of the Europa League where they were defeated by AZ.

Tin Karamatić is a Croatian football defender who plays for Triglav Kranj.

The 2013–14 Dynamo Moscow season was the 91st season in the club's history. They participated in the Russian Premier League, finishing 4th whilst also reaching the Fifth Round of Russian Cup, where they were defeated by Salyut Belgorod.