Ivančić was born in Davor, Croatia. [2] After the study of philosophy and theology in Zagreb and Rome he was ordained priest of the Zagreb Archdiocese in 1966. After achieving a doctorate at the Papal Gregorian University in Rome, he returned to Zagreb to become professor at the Catholic-Theological Faculty of the University of Zagreb. He was head of the Chair of Fundamental Theology, one of the editors of the magazine “Bogoslovska smotra” (Theogian’s Review), member of the editorial boards and associate of many Croatian and foreign theology magazines and member of the Croatian Literary Translators’ Association. Since 1983 he was canon of Zagreb’s Cathedral Chapter.

The areas of his scientific work are philosophy, theology and literature. The area of his special interest is the research of men’s existential-spiritual dimension, in which he was discovering new possibilities and ways of modern evangelisation and the need of developing spiritual medicine, which - next to somatic and psychiatric medicine - is indispensable in the holistic healing of man, and especially in healing spiritual illnesses and addictions. For this purpose he developed the method of hagiotherapy and founded the Centre for Spiritual Help in 1990 in Zagreb, which he was the head of.

Apart from working at the Faculty, since 1971 Tomislav was also a religious teacher for students in Zagreb, the initiator of the prayer movement in the Church in Croatia, founder of the religious community “Prayer and Word” (Zajednica “Molitva i Riječ”) and the “Centre for a Better World”, as well as lecturer at numerous seminars for the spiritual renewal in Croatia and abroad. In the last decade he has been training persons to work in centres for spiritual help and hold seminars for the apostolate of evangelisation in Croatia and abroad.

His scientific and expert articles are published in Croatian and foreign magazines. He wrote more than 50 books, of which almost the half was translated into foreign languages, whereas some have been published only in foreign languages. His book “Follow Me” (Pođi za mnom) was translated in 12 languages. He was editor-in-chief of the magazine “Steps” (Koraci), and then “New Steps” (Novi koraci), as well as founder of the magazine “Hagiotherapy” (Hagioterapija).

On 9 February 2004 Pope John Paul II designated him member of the International Theological Commission, [4] presided over by the Prefect of the Congregation for the Doctrine of the Faith, Joseph Cardinal Ratzinger, after Pope Benedict XVI.

Ivančić is author and host of a very popular radio program “Lord, teach us to pray” which is broadcast during the academic year. 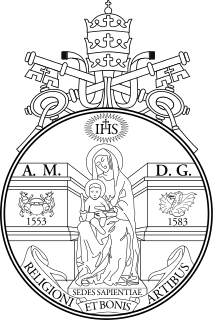 Josip Bozanić is a Croatian Cardinal of the Catholic Church. He is the eighth and current Archbishop of Zagreb, having previously served as Bishop of Krk from 1989 to 1997. He was elevated to the cardinalate in 2003. He is a member of the Supervisory Commission of Cardinals of the Institute for the Works of Religion, along with other five cardinals.

The Catholic Church in Croatia is part of the worldwide Catholic Church that is under the spiritual leadership of the Pope, Roman Curia and the Croatian Bishops' Conference. Its administration is centered in Zagreb, and it comprises five archdioceses, 13 dioceses and one military ordinariate. Cardinal Josip Bozanić is the Roman Catholic Archbishop of Zagreb.

Josip Stadler was a Roman Catholic priest, the first Archbishop of Vrhbosna, the founder of the religious order of the Servants of the Infant Jesus. He is a candidate for sainthood.

Hagiotherapy is the medieval practice of using religious relics, prayers, pilgrimages, etc. to alleviate sickness. It was used to treat epilepsy during the Middle Ages with Saint Valentine particularly associated with the treatment as an 'epilepsy specialist'. 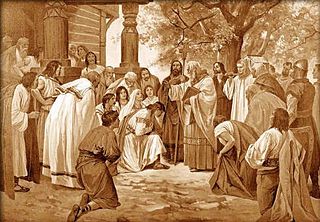 The Pontifical Athenaeum Regina Apostolorum is an educational institute of the Catholic Church in Rome.

László Német is a Societas Verbi Divini monk and the Roman Catholic bishop of Zrenjanin.

Rajmund Kupareo was a Croatian Roman Catholic priest, poet, theological writer, composer, translator and editor. He wrote in Croatian, Czech, Latin and Spanish. He spent most productive years of his life working in Chile as a professor of aesthetics and axiology in Santiago de Chile; he served there as the dean of the Faculty of Philosophy (twice) and the vice-rector of the Pontifical Catholic University of Chile. 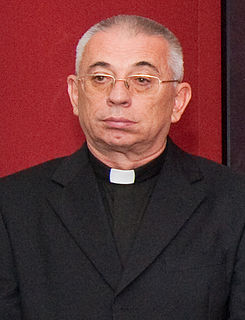 Ivan Devčić is a Croatian archbishop of the Roman Catholic Archdiocese of Rijeka and university professor of philosophy. 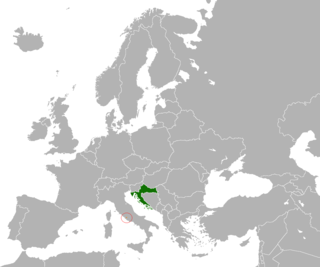 Croatia–Holy See relations refer to the bilateral relationship between Croatia and the Holy See. Diplomatic relations among two countries were established on February 8, 1992 following Croatia's independence from SFR Yugoslavia, although they date far back in history. Croatia has an embassy in Rome, and the Holy See has an apostolic nunciature in Zagreb.

Bogoslovska smotra is a Croatian interdisciplinary quinquennial scientific journal and among the oldest, still-publishing theology journals in the world, since 1910.