Smoljanović won bronze at the 2000 Summer Olympics and silver at the 2001 World Championships as a member of the national eights team. As a physician, he gained public prominence in 2011 for his research and campaigning which were instrumental in uncovering the harmful side effects of bone morphogenetic protein 2 therapy.

Smoljanović was born in Split in 1977. He took up rowing in 1989, but had to leave it due to bad grades in school, and returned to the sport only in 1993. Since 1994, as a member of HVK Gusar rowing club, he competed in the coxed pairs with Damir Vučičić, winning world junior silver medal in 1995. In 1998 Smoljanović won silver in the coxed fours in the World University Rowing Championships, teamed with Vučičić, Nikša Skelin and Oliver Martinov. [1] Smoljanović moved from HVK Gusar to Zagreb-based HAVK Mladost rowing club in 1999, after enrolling in the School of Medicine, University of Zagreb. [2]

Smoljanović won a bronze medal in the eights competition at the 2000 Summer Olympics in Sydney. His teammates were Igor Boraska, Nikša Skelin, Siniša Skelin, Branimir Vujević, Krešimir Čuljak, Tihomir Franković and Igor Francetić, with Silvijo Petriško as coxswain. [4] In the 2001 World Rowing Championships in Lucerne, Smoljanović was a member of a slightly changed national eights team – with Oliver Martinov and Damir Vučičić instead of Franković and Francetić – which won a silver medal. [5]

Smoljanović retired from competitive rowing in 2003. [3]

After earning his M.D. degree in 2002, [6] Smoljanović worked as a physician at the Department of Orthopaedics of the University Hospital Centre in Zagreb. [7] In 2006, while examining the available literature on bone morphogenetic protein 2 (BMP-2), used to stimulate bone growth in spinal fusion procedures, Smoljanović and his colleagues discovered that BMP-2 therapy had major side effects that were being ignored by most studies. [8] [9] The most serious complication was retrograde ejaculation, which caused temporary or even permanent sterility in men. [3] [8] Smoljanović started to write letters to editors of medical journals, pointing to deficiencies in papers on the BMP-2 therapy, but both the letters and Smoljanović's review article on the topic were rejected for publication. [10] Nevertheless, he remained unconvinced, feeling that his concerns were not met with valid counterarguments. [10] After finding out that most editorial boards of rejecting journals had at least one member with financial ties to Medtronic, a major producer of BMP-2-based products, [10] [11] Smoljanović and his colleagues took the "guerrilla science approach", [12] writing more than 35 letters to medical journals. [8]

Smoljanović's complaints eventually caught the attention of Stanford researchers, [8] whose 2011 study ultimately found that the incidence of harmful side effects was 10 to 50 times higher than previously reported, and criticized the earlier industry-sponsored studies for "biased and corrupted research". [13] In 2011, the US Senate and Department of Justice started investigations of Medtronic over the omissions of safety problems from clinical trials data. [14]

Smoljanović currently works as an assistant professor at the School of Medicine, University of Zagreb and is a member of FISA Sports Medicine Commission. [15] In 2013, the Croatian Ministry of Science, Education and Sport named him among top twenty junior researchers in the country. [16]

Jure Francetić was a Croatian Ustaša Commissioner for the Bosnia and Herzegovina regions of the Independent State of Croatia (NDH) during World War II, and commander of the 1st Ustaše Regiment of the Ustaše Militia, later known as the Black Legion. In both roles he was responsible for the massacre of Bosnian Serbs and Jews. A member of Ante Pavelić's inner circle, he was considered by many Ustaše as a possible successor to Pavelić as Poglavnik (leader) of the NDH. He died of wounds inflicted when he was captured by Partisans near Slunj in the Kordun region when his aircraft crash-landed there in late December 1942.

Imotski is a small town on the northern side of the Biokovo massif in the Dalmatian Hinterland of southern Croatia, near the border with Bosnia and Herzegovina. Imotski, like the surrounding inland Dalmatia, has a generally mild Mediterranean climate which makes it a popular tourist destination.

Igor Boraska is a Croatian rower who won a bronze medal in the eights competition at the 2000 Summer Olympics in Sydney.

Events from the year 1914 in Croatia.

Denis Glavina is a Croatian professional footballer who plays for NK Međimurje in the Croatian Second Football League. 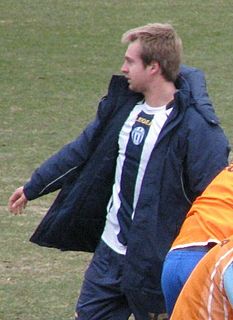 Cosmin Alexandru Radu is a Romanian professional water polo player who is currently playing for HAVK Mladost. Previously he has played for Primorje Rijeka, HAVK Mladost, Rari Nantes Florentia, Rapid Bucharest. He is also the captain of Romania's national team.

Tomislav Radić was a Croatian film director and screenwriter.

Kristijan Milaković is a Croatian professional water polo player who currently plays for Savona of the Serie A1. He also represents the Croatia men's national water polo team. Although his primary positions are left or right flat(driver), he is polivalent player and he can play as Hole D as well. He is 203 cm tall and 105 kg heavy but his main advantage and the fact with whom he is making difference among other water polo players in the pool is 220 cm long arm span (reach).

Andrija Komadina is a Croatian former professional water polo player. He was a member of the Croatia men's national water polo team, played as a defender. He was a part of the Croatian team that won the fourth place at the 2005 World Championship and the fourth plaće at the 2006 World Cup. On club level, he played most notably for VK Šibenik, HAVK Mladost, VK Jug Dubrovnik and VK Solaris in Croatia, as well as for Olympiacos in Greece. As a member of Jug Dubrovnik, he won the 2005–06 LEN Euroleague and as a member of Olympiacos from 2006 to 2011 he won 5 Greek Championships (2007–2011), 5 Greek Cups (2007–2011) and the fourth place in the Final Four of the 2006–07 LEN Euroleague.He is currently the president of VK Vodice. He is 6 ft 5 in tall and weighs 240 lb.

Andro Krstulović Opara is a Croatian politician and art historian who has been Mayor of Split since 2017.

The Croatian Medical Journal is a bimonthly peer-reviewed diamond open access general medical journal. It was established in 1953 as the Acta Facultatis Medicae Zagrabiensis, obtaining its current name in 1992. Its first issue under its current title was published in February 1992, and it has been published by Medicinska naklada since 2001. It was previously published by the University of Zagreb School of Medicine. The editor-in-chief is Tomislav Smoljanović. According to the Journal Citation Reports, the journal has a 2016 impact factor of 1.619.