Tomka and His Friends

Tomka and his friends (Albanian : Tomka dhe shokët e tij) is a 1977 Albanian drama film directed by Xhanfise Keko. The film stars Enea Zheku as Tomka, the leader of a group of boys fighting Nazis. The movie was mostly shot in the city of Berat, Albania.

Tomka is a boy who likes playing football with his friends. When the German army captures his town, the German soldiers establish their camp in the town stadium. Tomka with help from his friends and their parents organizes sabotage actions against the soldiers.

Ndoc Martini was an Albanian painter. 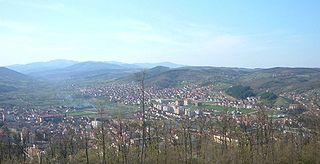 Kuršumlija is a town and municipality located in the Toplica District of the southern Serbia. It is situated near the rivers Toplica, Kosanica and Banjska, on the southeast of mount Kopaonik, and northwest of Mount Radan. As of 2011, the town has 13,306 inhabitants, while municipality has 19,213.

Qemal Stafa was a founding member of the Albanian Communist Party, and the leader of its youth section. 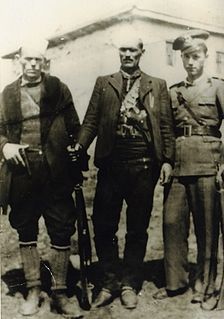 Xhemail Hasani, known as Xhem Hasa and Xhem Gostivari, was an Albanian nationalist and Axis collaborator, in charge of the Balli Kombëtar's activities in the western regions of Macedonia, a part of Yugoslavia occupied by Fascist Italy and Nazi Germany during World War II.

Zehrudin Dokle, is an Albanian actor and director of Bulgarian origin.

Bedri Pejani was 20th century Albanian politician. During World War II, he was one of the founders of the Second League of Prizren. 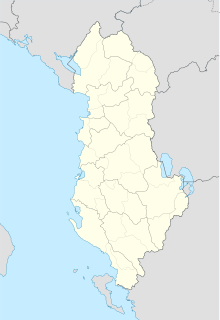 Kaçinar is a village and a former municipality in the Lezhë County, northwestern Albania. At the 2015 local government reform it became a subdivision of the municipality Mirditë. The population at the 2011 census was 1,016.

Sami Vrioni (1876–1947) was an Albanian politician, diplomat, and a delegate at the Assembly of Vlora which declared the Albanian Declaration of Independence. He was a respected and powerful landowner in the Fier region of Albania.

Albert Bunjaki is a Kosovan professional football coach and former player who last worked as advisor of Feronikeli.

Naum Veqilharxhi, born Naum Panajot Bredhi (1797–1846), was an Albanian lawyer and scholar. In 1844, he created a unique alphabet for the Albanian language using characters he had created himself, the Vithkuqi script. Veqilharxhi is one of the most prominent figures of the early Albanian National Awakening, and is considered by Albanians as its first ideologue.

Margarita Xhepa is an Albanian stage and film actress. She began her career in Tirana, at the National Theatre. There she acted in plays by Anton Chekov, Friedrich Schiller, and Nikolai Gogol, among others. She has presented the first Festivali i Këngës in 1962.

The Peasant Revolt in Albania, also known as the Islamic Revolt or Muslim Uprising in Albania, was the uprising of peasants from central Albania, mostly Muslims but also others, against the regime of Prince Wilhelm of Wied during 1914, and was one of the reasons for the prince's withdrawal from the country, marking the fall of the Principality of Albania. The revolt was led by Muslim leaders Haxhi Qamili, Arif Hiqmeti, Musa Qazimi and Mustafa Ndroqi. As well as total amnesty, the rebels demanded the return of Albania to the suzerainty of the Sultan of the Ottoman Empire. 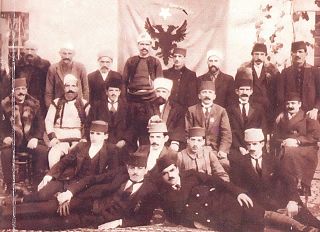 The Committee for the National Defence of Kosovo was an Albanian organization illegally founded in Shkodër at the beginning of November 1918. It was mainly consisted of the political exiles from Kosovo and was led by Hoxha Kadri from Priština. It existed in looser form since May 1915.

Kostandin Boshnjaku was an Albanian banker, politician, diplomat and in the last years of his life as a translator of books. Even though he was one of the erliest Albanian communists, he was arrested and convicted on 31 December 1947 by the Supreme Military Court with life imprisonment due to the divergences he had with the communist regime. In 1949, he was released from prison by an amnesty, while unofficially it was said to have been released with the direct intervention of Soviet ambassador Dmitry Chuvakhin. He spent the last years of his live in Durrës serving as a translator of books in several languages. 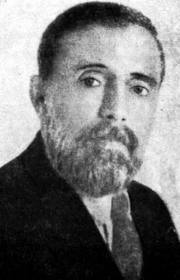 Besim Fagu was an Albanian football player who played for 17 Nentori Tiranë and Partizani Tirana where he won seven National Championships. He was also a member of the Albania national team between 1946 and 1953, where he earned 11 caps and also won the 1946 Balkan Cup.

The Todhri alphabet is an 18th-century Albanian alphabet invented for writing the Albanian language by Dhaskal Todhri. It is a complex writing system of fifty-two characters which was used sporadically for written communication in and around Elbasan from the late eighteenth century on. The Todhri alphabet was discovered in Elbasan by Johann Georg von Hahn (1811–1869) who published it in 1854 his work Albanesische Studien in Jena. He considered it to be 'the original' Albanian alphabet and a derivative of the ancient Phoenician script. Leopold Geitler (1847–1885) and Slovenian scholar Rajko Nahtigal (1877–1958) subsequently studied the alphabet, concluding that it was derived primarily from the Roman cursive.