Tommaltach Ua Conchobair, bishop of Elphin and archbishop of Armagh, lived from c. 1150–1201.

He became bishop of Elphin about 1174, and may have travelled to Rome to receive confirmation. He may have been responsible for the founding of a Cistercian house at Athlone. In 1179 he attended Ua Tuathail's council in Dublin, giving the latter's reforms his support. Ua Conchobair travelled with the archbishop to Armagh early in 1180 to settle the diocese's succession dispute; Ua Tuathail, at the time the Papal Legate to Ireland, appointed Ua Conchobair to the position.

However, he was not fully accepted by the local clergy on his own terms until 1181. In 1184, there was an attempt to replace him with a member of the ruling dynasty of the kingdom of Airgialla, bishop Mael Isu Ua Cerbaill of Clogher, with Ua Conchobair unable to fully regain his see until 1186.

He appears to have maintained good relations with Hugh de Lacy, Lord of Meath, and King John during the latter's visit to Ireland in 1185.

Much of his diocese was destroyed by the long war between John de Courcy and King Ruairi of Ulaid. Despite this, he was assisted by de Courcy in commissioning a life of Saint Patrick to advance Armagh's claim to the primacy of Ireland, against that of Dublin.

At the 1192 Synod of Dublin, he successfully regained for Armagh control of the diocese of Louth, which had been claimed by King Donnchadh Ua Cearbaill of Airgialla in the 1150s.

The ongoing warfare in Ulster between the Ulaid and de Courcy forced Ua Conchobair to spend most of the last five years of his life in Drogheda. Much of his correspondence and diocesan documents have been lost, but those that survive include letters from Innocent III concerning disputed elections, support for canons of the Arrouasian order and the canonical position of women.

He died in 1201 while travelling to Armagh, and was buried at the Cistercian abbey of Mellifont.

Since the early 17th century, there have been four Provinces of Ireland: Connacht, Leinster, Munster, and Ulster. The Irish word for this territorial division, cúige, meaning "fifth part", indicates that there were once five; however, in the medieval period there were more. The number of provinces and their delimitation fluctuated until 1610, when they were permanently set by the English administration of James I. The provinces of Ireland no longer serve administrative or political purposes but function as historical and cultural entities.

St. Lorcán Ua Tuathail, known in English as Saint Laurence O'Toole and in French as St. Laurent d'Eu, was Archbishop of Dublin at the time of the Norman invasion of Ireland. St. Lorcán played a prominent role in the Irish Church Reform Movement of the 12th century and mediated between the parties during and after the invasion. He was canonised in 1225 by Pope Honorius III. 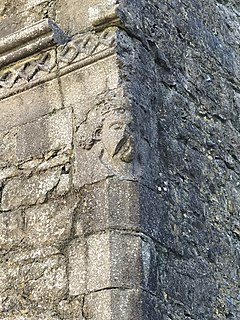 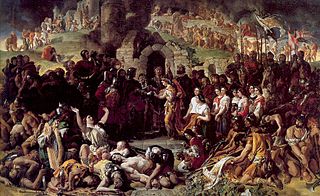 The Anglo-Norman invasion of Ireland took place during the late 12th century, when Anglo-Normans gradually conquered and acquired large swathes of land from the Irish, which the Kingdom of England then claimed sovereignty over. At the time, Gaelic Ireland was made up of several kingdoms, with a High King claiming lordship over most of the other kings. The Norman invasion was a watershed in Ireland's history, marking the beginning of more than 800 years of direct English and, later, British involvement in Ireland.

Events from the year 1224 in Ireland.

Áed Ua hOissín was consecrated first Archbishop of Tuam in 1152 and died in 1161. He was closely associated with Connaught royalty, and had served as abbot of Tuam.

Muireadhach Ua Dubhthaigh was an Archbishop of Connacht, in Ireland.

Events from the year 1216 in Ireland.