Badia was born in Modena in 1483. He contributed to the establishment of the Jesuits and was the theological advisor of cardinal Gasparo Contarini. Badia was disputant in Worms 1540 and Regensburg 1541. He was promoted cardinal by Pope Paul III on June 2, 1542, but did not accept the offer to be bishop of Urbino at the same time. Badia died in Rome on September 6, 1547.

Gasparo Contarini was an Italian diplomat, cardinal and Bishop of Belluno. He was one of the first proponents of the dialogue with Protestants, after the Reformation.

San Pietro in Vincoli is a Roman Catholic titular church and minor basilica in Rome, Italy, best known for being the home of Michelangelo's statue of Moses, part of the tomb of Pope Julius II.

Paulus Castrensis was an Italian jurist of the 14th century.

The Consilium de Emendanda Ecclesia was a report commissioned by Pope Paul III on the abuses in the Catholic Church in 1536.

The Basilica of Saint Sylvester the First, also known as, is a Roman Catholic minor basilica and titular church in Rome dedicated to Pope Sylvester I. It is located on the Piazza San Silvestro, at the corner of Via del Gambero and the Via della Mercede, and stands adjacent to the central Post Office.

The bishop of Ostia is the head of the suburbicarian diocese of Ostia, one of the seven suburbicarian sees of Rome. Since 1150, the bishop has been the dean of the College of Cardinals, with the actual governance of the diocese entrusted to the vicar general of Rome. 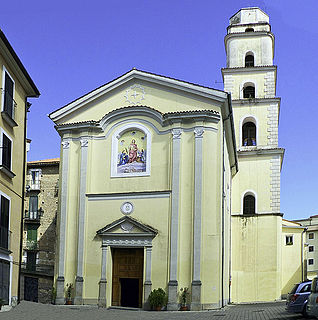 The Italian Catholic Diocese of Vallo della Lucania, in Campania, has existed under this name since 1945. It is a suffragan of the Archdiocese of Salerno-Campagna-Acerno.

Tommaso Malvito was an Italian sculptor, known particularly for his work on funerary monuments in Naples at the turn of the fifteenth and sixteenth centuries. 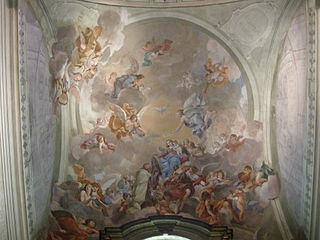 Vincenzo Meucci (1694–1766) was an Italian painter of the late-Baroque period. Born in Florence. He was a pupil first of the painter Sebastiano Galeotti, then of Giovanni Gioseffo dal Sole in Bologna.

Badia may refer to: 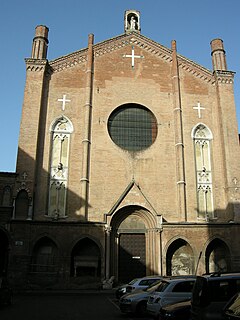 Pietro Bertani (1501–1558) was an Italian Roman Catholic bishop and cardinal.

Benedetto Bonazzi was a Catholic archbishop and Italian Hellenist