Tommaso Caracciolo, Count of Roccarainola (10 March 1572 – 5 December 1631), was among others a Field Marshal who commanded parts of the Spanish forces in the Thirty Years' War.

His father, Tristano Caracciolo, was the son of Michele Caracciolo, II. Baron of Castelfranco (Cosenza ) and signore of Lusciano (Terra di lavore) and Ponte Albaneto (Capitanata). Michele had the lordship of these lands from 1530 to his death in 1548, inheriting them from his uncle Berardino Caracciolo, created first baron by privilege signed by the King Fernando I of Aragon at Castelnovo of Naples on 20 June 1598. [1]

He seems to have had some military experiences in his youth; he reportedly assisted in the siege of Brichesario (1594). On 25 August 1600 he was made a captain by his relative Camillo Caracciolo (1563–1617), Count of Avellino, who entrusted him a tercio. On 5 September he was made a sergeant major of this tercio. He took part at the Siege of Ostend in Flanders. He is mentioned as Maestro de Campo (Field Marshal) in the war in Montferrat in the Piedmont (1614–1617). [2]

After 1617, he made him captain of war of the Val di Noto (between Catania and Messina) by the viceroy Count of Osuna, in order to establish the defense of Sicily against a suspected Turkish invasion. [3] [4]

On 2 January 1619 he got the permit to leave Sicily and came back to Naples where he took part in the expedition of Carlo Spinelli to Bohemia as an adventurer without military order. Later the same Carlo Spinelli refuses to serve under Tommaso Caracciolo in Germany. [5]

He commanded some of the Spanish troops on the way to the Battle of White Mountain north of Prague on 8 November 1620, in which half of the enemy forces were killed or captured. [6] After that, on 22 July 1621, the Emperor appointed him to the post of Master field general in Moravia. [7]

He successfully captured a hill with Walloon musketeers under his command at the Battle of Höchst. [8]

Campaign against French-Savoyan-Forces in Northern Italy

He was defeated by Savoian-French troops near Voltaggio, which he left to meet the enemy, being taken a prisoner by the Duke of Savoy on 9 September 1625, in which hands he remained until 11 September 1625, when Philip IV of Spain paid for his rescue.

After two years in Milan, he came back to Naples on 3 August 1625, being appointed Commissary and Superintendent General of the Fortifications of the Kingdom, a post that he maintained till his death. By his military services, the king of Spain had appointed him Count of Roccarainola, a title raised to Duke of Roccarainola in 1667 for his eldest son. [9] [10]

Martin Opitz von Boberfeld was a German poet, regarded as the greatest of that nation during his lifetime.

The Caravaggisti were stylistic followers of the late 16th-century Italian Baroque painter Caravaggio. His influence on the new Baroque style that eventually emerged from Mannerism was profound. Caravaggio never established a workshop as most other painters did, and thus had no school to spread his techniques. Nor did he ever set out his underlying philosophical approach to art, the psychological realism which can only be deduced from his surviving work. But it can be seen directly or indirectly in the work of Rubens, Jusepe de Ribera, Bernini, and Rembrandt. Famous while he lived, Caravaggio himself was forgotten almost immediately after his death. Many of his paintings were reascribed to his followers, such as The Taking of Christ, which was attributed to the Dutch painter Gerrit van Honthorst until 1990. It was only in the 20th century that his importance to the development of Western art was rediscovered. In the 1920s Roberto Longhi once more placed him in the European tradition: "Ribera, Vermeer, La Tour and Rembrandt could never have existed without him. And the art of Delacroix, Courbet and Manet would have been utterly different". The influential Bernard Berenson stated: "With the exception of Michelangelo, no other Italian painter exercised so great an influence."

One tercio was a military unit of the Spanish Army during the time of the House of Austria. The Tercios were famous for their resistance on the battlefield, forming the elite of the military units available to the kings of the Hispanic Monarchy of the time. The thirds were the essential piece of the terrestrial hegemony, and sometimes also maritime of the Spanish Empire. The Tercio is considered the rebirth of the infantry on the battlefield, comparable to the Roman legions or the Macedonian phalanxes. 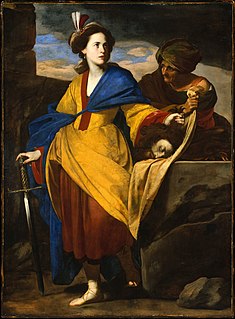 Massimo Stanzione was an Italian Baroque painter, mainly active in Naples, where he and his rival Jusepe de Ribera dominated the painting scene for several decades. Most of his work, in both oils and fresco, depicted religious subjects. A papal knight, he is often referred to as Cavalliere Massimo Stanzione, especially in older sources.

The Diocese of Aversa is a Roman Catholic ecclesiastical territory in Campania, southern Italy, created in 1053. It is situated in the Terra di Lavoro (Liburia), seven miles north of Naples, and eight miles south of Capua. It is suffragan of the Archdiocese of Naples.

Don Carlos II Coloma y de Saa, knight of Santiago, 1st Marquess of Espinar was a Spanish military commander, diplomat and author. He is also known as a translator of Tacitus.

Frederick William of Cieszyn was a Duke of Cieszyn since 1617 until his death. 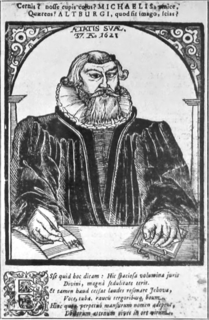 Michael Altenburg was a German theologian and composer.

John VIII, Count of Nassau-Siegen was a German nobleman and militarist of the 17th century. 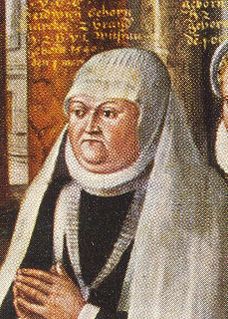 The Battle of Rinnthal was the heaviest battle of the Palatine uprising and took place on 17 June 1849 near Rinnthal in the Annweiler valley in Europe. The revolutionary troops under August Willich tried in vain to halt the advance of Prussian troops on Landau. 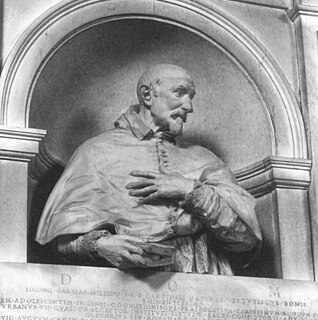 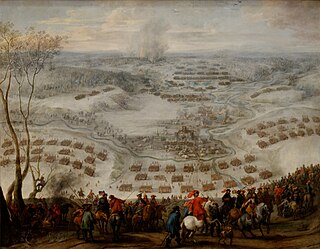 The Battle of Preßnitz was a military engagement fought on 27 March [O.S. 17 March] 1641 during the Thirty Years' War. In the battle, Imperial troops under Octavio Piccolomini defeated the Swedish army under Field Marshal Johan Baner.