Tommaso Baldasarre Crudeli (Poppi, December 21, 1702 - Poppi, March 27, 1745) was a Florentine free thinker who was imprisoned by the Roman Inquisition. [1] He was a poet, lawyer, champion of free thought and is remembered as the first martyr of Universal Freemasonry.

Tomaso was born into a wealthy family from the Casentino (upper Arno), whose history dated back to the 12th century, albeit with several changes of name. The eponym is related to the story of the expulsion of Count Guidi from the castle of Poppi in 1440. Eventually, turning to Jacopo Crusca, leader of the revolt, he said "Vos quoque crudeles" and got the answer "in crudelitates fides". From this episode the family was appointed as "Crudeli" (meaning "cruels").

The Palazzo Crudeli (15th century) was the most important building after the castle and churches within the walls of Poppi, thanks to the economic strength of the family. The prosperity of the lineage is also understandable as all generations have graduated from the University of Pisa continuously since 1502. Tommaso was the seventh graduating in Utroque Jure in Pisa in 1726. His mentor was Bernardo Tanucci (Premier of Naples and Sicily Kingdom) during the preparation of studies and university years.

Tommaso stayed in Venice with the Counts Contarini, before returning to Florence as professor of Italian for the expatriate English colony. For his lively intellect and his boldness, Tommaso was initiated on May 5, 1735 into the English Lodge, an offshoot of the Grand Lodge of England, and the first Masonic Lodge in Italy. He became secretary, but later became a scapegoat for the growing conflict between the Vatican and the English Freemasonry. Tommaso suffered a long imprisonment (May 1739-April 1741) on uncertain charges, which was later commuted to perpetual house arrest. Bed-bound at the end of his life, he died from the after-effects of torture and imprisonment on 27 March 1745 in Poppi. He had time to dictate a long report ordered by the Grand Duke on the basis of which the Inquisition Tribunal of Florence was finally closed, in 1744, while Tommaso was still alive. The Roman Inquisition as a whole was increasingly limited from the mid-18th Century as nobles sought to curtail its power.

A Masonic lodge, often termed a private lodge or constituent lodge, is the basic organisational unit of Freemasonry. It is also commonly used as a term for a building in which such a unit meets. Every new lodge must be warranted or chartered by a Grand Lodge, but is subject to its direction only in enforcing the published constitution of the jurisdiction. By exception the three surviving lodges that formed the world's first known grand lodge in London have the unique privilege to operate as time immemorial, i.e., without such warrant; only one other lodge operates without a warrant – the Grand Stewards' Lodge in London, although it is not also entitled to the "time immemorial" title. A Freemason is generally entitled to visit any lodge in any jurisdiction in amity with his own. In some jurisdictions this privilege is restricted to Master Masons. He is first usually required to check, and certify, the regularity of the relationship of the Lodge – and be able to satisfy that Lodge of his regularity of membership. Freemasons gather together as a Lodge to work the three basic Degrees of Entered Apprentice, Fellowcraft and Master Mason.

The history of Freemasonry encompasses the origins, evolution and defining events of the fraternal organisation known as Freemasonry. It covers three phases. Firstly, the emergence of organised lodges of operative masons during the Middle Ages, then the admission of lay members as "accepted" or "speculative" masons, and finally the evolution of purely speculative lodges, and the emergence of Grand Lodges to govern them. The watershed in this process is generally taken to be the formation of the first Grand Lodge in London in 1717. The two difficulties facing historians are the paucity of written material, even down to the 19th century, and the misinformation generated by masons and non-masons alike from the earliest years. 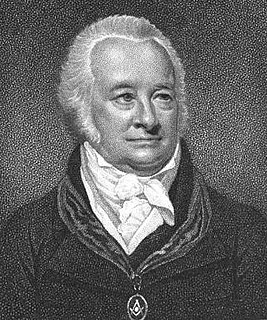 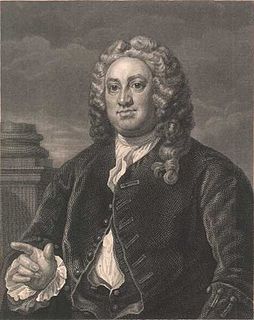 Anti-Masonry is "avowed opposition to Freemasonry", which in some countries and religious groups has led to suppression. However, there is no homogeneous anti-Masonic movement. Anti-Masonry consists of radically differing criticisms from sometimes incompatible groups who are hostile to Freemasonry in some form.

John Coustos was an 18th-century Swiss businessman living in England. Coustos is primarily known for his involvement with freemasonry after joining the Premier Grand Lodge of England in London. He subsequently was active in freemasonry in Lisbon and came into conflict with the Portuguese Inquisition. The fallout in the aftermath of this was a major event in the struggle between Catholicism and Freemasonry.

Dr. James Anderson was a Scottish writer and minister born and educated in Aberdeen, Scotland. He was ordained a minister in the Church of Scotland in 1707 and moved to London, where he ministered to the Glass House Street congregation until 1710, to the Presbyterian church in Swallow Street until 1734, and at Lisle Street Chapel until his death. He is reported to have lost a large sum of money in the South Sea Company crash of 1720. Anderson is best known for his association with Freemasonry. 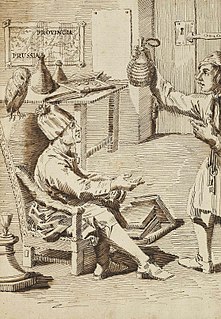 Baron Philipp von Stosch was a Prussian antiquarian who lived in Rome and Florence.

Poppi is a comune (municipality) in the Province of Arezzo in the Italian region Tuscany, located about 40 km (25 mi) east of Florence and about 30 km (19 mi) northwest of Arezzo.

Francis Drake was an English antiquary and surgeon, best known as the author of an influential history of York, which he entitled Eboracum after the Roman name for the city. 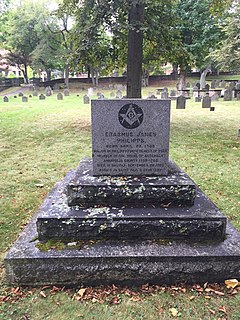 Erasmus James Philipps was the second longest serving member on Nova Scotia Council (1730-1760) and the nephew of Nova Scotia Governor Richard Philipps. He was also a captain in the 40th Regiment of Foot. He was a member of the Nova Scotia House of Assembly from 1759 to 1760. On the retirement of Lt. Gov. Paul Mascarene, Major Philipps became commander of the forces at Annapolis Royal, Nova Scotia (1749-1760). He arranged the Cape Sable Campaign during the French and Indian War. He is the earliest known settler of Nova Scotia who was buried in the Old Burying Ground.

The first known Freemasons in Portugal were the Swiss John Coustos and two other Portuguese members of his lodge, who were arrested by the Portuguese Inquisition and questioned under torture in the 1740s. Coustos wrote a book detailing his sufferings under the Inquisition and pointed to 1728 as being the year of the first Lodge, although nothing is known of the first years of this Lodge and it was not then recognised by the Grand Lodge of England. Today there are several Masonic Obediences in Portugal.

Freemasonry in Spain is first recorded in 1728, in an English lodge. As various papal bulls condemned Freemasonry the Spanish Inquisition did their best to close lodges and demonise Freemasons, therefore the success of Freemasonry from year to year depended on the sympathy or antipathy of the ruling regime. Nevertheless, lodges and even Grand Lodges were formed, and even thrived during more liberal periods. When Francisco Franco consolidated power in 1939, all Freemasonry was banned. In 1979, four years after Franco's death, bans on Freemasonry were declared unconstitutional, and several Grand Lodges and Orients now flourish in Spain.

Freemasonry in Germany started in several places during the second quarter of the Eighteenth century. After the extinction of the Rite of Strict Observance, which had a wide following and claimed Templar origins for its higher degrees, the several Grand Lodges in Germany defied all attempts at unification, although a largely ineffectual central organisation came into being with the unification of Germany. During the 1920s Freemasons were harassed alongside Jews by those taken in by the Protocols of the Elders of Zion, and blamed for the German surrender of 1918. This culminated with the suppression of Freemasonry by the Nazis in 1935, with many Masons in Germany and occupied countries being executed or sent to concentration camps. Freemasonry returned to Germany after World War Two. A single central body now represents five "regular" Grand Lodges. Liberal, women's, and mixed lodges also exist.

Freemasonry in Italy dates to the first half of the eighteenth century. Its success largely depended on the lack of enthusiasm with which Papal bans on the order were enforced in the various states, but after the end of the Napoleonic regime, Freemasonry was suppressed in most of the peninsula. The start of the unification process in 1859 saw a revival in Freemasonry. Giuseppe Garibaldi, a leader of Italian unification, was an active mason and a keen supporter of the craft. In the 1920s Freemasonry was again suppressed under Fascism but revived again after the fall of Benito Mussolini. Today's Italy contains a wide variety of Masonic observances, regular, liberal, male, female and mixed.

The Guidi were a Tuscan aristocratic family prominent in the region during the Middle Ages. Descended from Tegrimo Guidi, the family practised partible inheritance and in the thirteenth century began to split into separate cadet lineages.

Freemasonry in Croatia may be traced to the second half of the 18th century when it was introduced by the officers that came back from the Seven Years' War (1756–1763). However, the fraternity has been repeatedly banned and re-founded since then.