He currently lives and works in the Sicilian town of Cefalù.

Geraci was awarded the Italian national honour of Cavaliere dell'Ordine della stella della Solidarietà Italiana (Knight of the Order of the Star of Italian Solidarity) in 1974. [2]

Since graduating, Geraci has become well known for his sculpture, working mainly in bronze. Many of his works are symbolic, drawing on the lessons of mythology, promoting humanity, and frequently take the form of circular plaques or medallions, small and large.

Works include the 1.9 m (6 ft) diameter bronze plaque at Palermo International Airport in memory of anti-mafia judges Giovanni Falcone and Paolo Borsellino, and a 9 m high statue of Saint Pio of Pietrelcina at Poggio Maria, Cefalù.

His works are known to be found in Denmark, Netherlands (including a monument in Leersum to the space age following the launch of Sputnik 1 [3] ), Italy, and the Vatican. 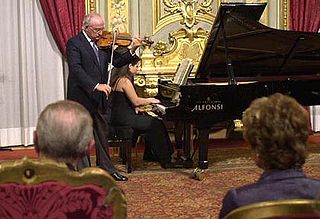 Salvatore Accardo is an Italian violinist and conductor, who is known for his interpretations of the works of Niccolò Paganini.

Manuela Dviri Vitali Norsa, is an Israeli Journalist, Peace activist and Author, who lives in Tel Aviv, Israel and in Virgoletta, a small town in Tuscany, Italy. 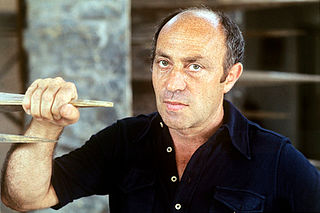 Arnaldo Pomodoro is an Italian sculptor. He was born in Morciano, Romagna, Italy. He lives and works in Milan. His brother, Giò Pomodoro (1930–2002) was also a sculptor.

Leonardo Bistolfi was an Italian sculptor and an important exponent of Italian Symbolism.

Rolando Garibotti is an Argentinian and American professional climber, writer, and mountain guide. He is from Bariloche, Argentina. These days he splits his time between the town of El Chaltén, Argentina, and the Dolomites in Italy.

Ferdinando Martini was an Italian writer and politician. He was governor of Eritrea for from late 1897 to early 1907.

Bojan Šober is a bass-baritone opera singer and manager. He has also served as a director of the Lions Clubs International.

Giovanni Capellini was an Italian geologist and paleontologist. He was a Senator of the Kingdom of Italy in the seventeenth legislature.

Cesare Aureli was an Italian sculptor and writer.

The Italian honours system is a means to reward achievements or service to the Italian Republic, formerly the Kingdom of Italy including the Italian Social Republic.

Dante Sodini was an Italian sculptor, mainly of religious subjects and funereal monuments.

Tommaso Solari was an Italian sculptor active in a Romantic-style.

Vincenzo de Feo was an Italian Admiral. He was even Governor of Italian Eritrea during 1937.

The "workshop" of Pietro Bazzanti and Son is an historic landmark in Florence, art and culture heritage of the city. It took part in the role of "Fine Arts Trader" at the National Exposition of 1861 in Florence with several marble sculptures and various other works. The Bazzanti Marble Studio won the medal for the category "sculpture".

Aristotelis ("Telis") Zervoudis is a professional diver from Greece.

Marcella Frangipane is a professor of archaeology at the Sapienza University of Rome. She works on the prehistory and protohistory of the Near East and Middle East. She was elected a foreign associate of the National Academy of Sciences (NAS) in 2013.