Tommi Johannes Eronen is a Finnish actor, best known for starring in the movies Jade Warrior (2006) and Bad Luck Love (2000). His performance in Bad Luck Love garnered him a Jussi Award for Best Supporting Actor. 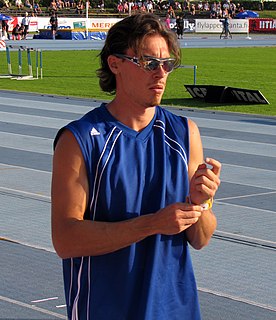 Jaakko Tommi Kristian Evilä is a Finnish former long jumper. He gained fame following his surprise bronze in the 2005 Helsinki World Championships, which was Finland's only medal in the championships.

Tommi Hakala is a Finnish operatic baritone and winner of the 2003 BBC Singer of the World Competition in Cardiff. He was born in Riihimäki, Finland.

Tommi were a British girl group formed in 2003. They only released one single, "Like What" which reached number 12 in the UK Singles Chart and number 38 in Ireland.

Jeff is a masculine given name, often a short form (hypocorism) of the English given name Jeffrey, which derives from a medieval variant of Geoffrey. Jeff is especially used in the US and Canada.

Sergius is a male given name of Roman origin. It is a common Christian name, in honor of Saint Sergius, or in Russia, of Saint Sergius of Radonezh. It is not common in English, although the Anglo-French name Sergeant is possibly related to it.

Darren is a masculine given name of uncertain etymological origins. Some theories state that it originated from an Anglicisation of the Irish first name Darragh or Dáire, meaning "oak tree". According to other theories, it is a variant of Darrell, which originated from the French surname D'Airelle, meaning "of Airelle". The common spelling of Darren is found in the Welsh language, meaning "edge": Black Darren and Red Darren are found on the eastern side of the Hatterrall Ridge, west of Long Town. Darren has several spelling variations including: Daren, Darin, Daryn, Darrin and Darryn.

Ari is a given name in many languages.

Eero, an Estonian and Finnish masculine given name. Notable people with the name include:

Lehtonen is a surname originating in Finland.

Matt or Mat is a given name, often used as a nickname for Matthew. Less commonly, it is used as a surname.

Ray is a masculine given name and short form (hypocorism) of Raymond, and may refer to:

Rinne may refer to:

Jean-Marc is a French masculine given name. It may refer to :

Niklas is a male name, most common in Sweden and the Swedish-speaking population of Finland. It is also used as a surname. Notable people with that name include:

Risto is a masculine given name, found in Finnish, Estonian and South Slavic. In South Slavic, it is a hypocorism derived from Hristofor or Hristivoje. It may refer to:

Virtanen is a surname originating in Finland, where it is the second most common surname.

Teemu is a Finnish male given name, and may refer to: