Stumpff spent his childhood with his family in Paris and Brussels before moving back to his birthplace, Düsseldorf. In the late 1970s he formed punk band KFC, as its lead singer.

The following single Contergan Punk was released on the Giftplatten label in 1983. It was produced by sound engineer Conny Plank and featured a heavy electropunk sound that would become characteristic of EBM.

Helheim is a Norwegian black metal band from Bergen, formed in 1992.

Clan of Xymox, also known as simply Xymox, are a Dutch rock band formed in 1981. Clan of Xymox featured a trio of songwriters – Ronny Moorings, Anka Wolbert, and Pieter Nooten – and gained success in the 1980s, releasing their first two albums on 4AD, before releasing their third and fourth albums on Wing Records and scoring a hit single in the United States. Their 1980s releases included synthpop/electronic dance music. The band is still active, continuing to tour and release records with Moorings the sole remaining original songwriter.

Revelation Records is an independent record label focusing originally and primarily on hardcore punk. The label is known for releases by bands such as Youth of Today, Warzone, Sick of It All, Quicksand, Side By Side, Chain of Strength, Shelter, Judge, No For An Answer, Gorilla Biscuits, and End of a Year.

Dag Nasty is an American punk rock band from Washington D.C., formed in 1985 by guitarist Brian Baker of Minor Threat, drummer Colin Sears and bassist Roger Marbury, both of Bloody Mannequin Orchestra, and vocalist Shawn Brown. Their style of less aggressive, melodic hardcore was influential to post-hardcore; their sound was partly influenced by The Faith and their 1983 EP Subject to Change. Brian Baker said in “Filmage”, the documentary about Descendents, that he started Dag Nasty as a direct inspiration from them.

Wizo is a German punk rock band from Sindelfingen, Germany, that formed in 1985. Their messages run from political to humorous; the band espouses left-wing politics and describes themselves as "against Nazis, racists, sexists, and other assholes!" The band split up in March 2005 and reunited in November 2009. Wizo's music is characterised by a combination of humorous and political lyrics with a fast, melodic punk rock sound. Wizo is considered part of the German movement known as "Fun-Punk".

Dive is a Belgian electronic dance music project formed in 1990 by Dirk Ivens. Dive's "audio trademark" is the experimental sound of abused drum machines, pulsating through crackling distortion on almost every song.

Pink Turns Blue are a post-punk band from Berlin, Germany. Formed in 1985, they were part of the first generation of gothic rock in Germany, and released their first LP, If Two Worlds Kiss with a sound reminiscent of new wave with very dark undertones and use of synthesizers, and went to become part of the developing sub-genre of dark wave.

Skrewdriver were an English Neo-Nazi punk band formed by Ian Stuart Donaldson in Poulton-le-Fylde, Lancashire in 1976. Originally a normal punk band that was very influential to later Oi! bands, Skrewdriver changed into a white supremacist rock band after reuniting in the 1980s. Their original line-up split in January 1979 and Donaldson reformed the band with different musicians in 1982. The new version of the band played a leading role in the Rock Against Communism movement.

Debil is the first full-length studio album by Die Ärzte, released in 1984, following the EPs Zu schön, um wahr zu sein! and Uns geht's prima.... The songs "Paul" and "Zu spät" were released as singles, without being successful initially. However, a live version of "Zu spät" was released as a single from the live album Nach uns die Sintflut in 1989 and became a moderate hit in Germany.

Dog Faced Hermans were a post-punk band that formed in Scotland in the mid 1980s and remained active through the mid 1990s. They emerged from the UK anarcho-punk scene with a guitar/bass/drums line-up, but also incorporated trumpet and other instruments not commonly found in punk music at that time. Their composition style incorporated many genres of music outside of rock, including folk, jazz, ambient and noise music with often unorthodox instrumentation.

Bigod 20 was a German EBM/techno band which was formed in 1988 by music producers Andreas Tomalla and Markus Nikolai.

Dritte Wahl is a German punk rock band from Rostock in Germany.

Terence Ashley Burrows is an English author, multi-instrumental musician, producer and professional e-sports player based in London. Best known as a cult performer under the alias Yukio Yung, Burrows is also a prolific author of books relating to music history, theory, and tuition, technology, business, popular psychology and modern history. His works include The Art of Sound, Mute: A Visual Document, Guitars Illustrated (Billboard), 1001 Guitars... (Cassell), KISS Guide to Playing Guitar, Total Guitar Tutor, and ITV Visual History of the 20th Century (Carlton). His books—now numbering close to one hundred titles—have been published in sixteen countries and translated into a dozen languages. As a writer, his pseudonyms include Terence Ashley, Harrison Franklin, Hans-Joachim Vollmer and Yukio Yung. He has also written for numerous periodicals in the UK, US, and Germany. 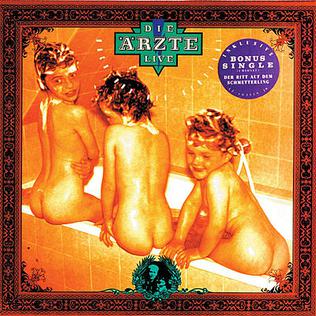 Live – Nach uns die Sintflut [Devil may care; lit: After us the Great Flood] is the eighth album by Die Ärzte. It is their first live album, released on triple vinyl and double CD, just before the band disbanded.

Dead Infection was a Polish goregrind band, that was founded in 1990 by Cyjan, and Domin. Since their formation, the band has released a few full-length albums, and 7" EPs. They are the second band from Poland after Vader that made a deal to release a CD/LP with a non-European label. Their second album, A Chapter Of Accidents, is considered by many to be among the milestones of goregrind music. They played numerous live shows around the world, including all of Europe, the United States, South America, Mexico, Japan. In February 2020, Cyjan died, which led to the group's disbandment.