Thomas Bamford (2 November 1905 – 12 December 1967 [1] ) was a Welsh professional footballer. During his career, he made over 200 appearances in the Football League, most notably for Wrexham, where he remains the club's all-time top goalscorer. [2] He also represented Wales at international level, winning 5 caps.

Born in Port Talbot, [1] Bamford had played amateur football for Cardiff Docks and Bridgend Town before joining Wrexham in 1928, at the age of 23. With 175 league goals (201 in all competitions) between 1928 and 1934, he is the club's all-time record league goalscorer. In the 1933–1934 season, he scored a club record 44 league goals (and 50 in total for the season), another record which still stands today. [2] During his time with the Dragons, Bamford helped them to win the Welsh Cup in 1931, scoring twice in the final during a 7–0 victory over Shrewsbury Town on 27 April 1931. [3]

He transferred to Manchester United in 1934 along with teammate Billy Bryant. [2] In his career with United, he would score 57 goals, [1] including 14 in 23 games in the 1937–38 season, playing a total of 109 Games for United and helped the club win the Division Two title in the 1935–6 season. [2] He left for Swansea Town in 1938, but the outbreak of the Second World War a year later halted his career, and by the time the war ended six years later Bamford was 40 years old and promptly retired from playing. [2]

Bamford was handed his international debut for Wales on 25 October 1930 in a 1–1 draw with Scotland in the 1930–31 British Home Championship, scoring Wales' goal after just six minutes. [4] After numerous Football League sides refused to release their players for the match due to a fixture clash, the Welsh side for the match was made of largely players from the lower divisions, the Welsh Leagues and non-league. The team became known as "Keenor and the unknowns" in reference to captain Fred Keenor and the relative obscurity of the players who featured in the team with him. [5]

Following his retirement, Bamford worked in a local steelworks. He died in Wrexham in December 1967 at the age of 62. [2] A hospitality suite at Wrexham's home stadium, the Racecourse Ground, is named 'The Bamford Suite' in honour of him. [6]

Eric Fred Brook was an English footballer who played in the outside left position. Brook was also an England international. He was a muscular player with 'one of the fiercest shots in pre-war football' and was a good penalty taker. Brook is regarded as one of Manchester City's and England's greatest ever players. He has been described 'as a brilliant roving forward for Manchester City and England' and 'one of the great names of British football'.

Frederick Charles Keenor was a Welsh professional footballer. He began his career at his hometown side Cardiff City after impressing the club's coaching staff in a trial match in 1912 organised by his former schoolteacher. A hard-tackling defender, he appeared sporadically for the team in the Southern Football League before his spell at the club was interrupted by the outbreak of the First World War. Keenor served in the 17th (Service) Battalion, Middlesex Regiment, led by Major Frank Buckley, which became known as the Football Battalion. He fought in the Battle of the Somme, suffering a severe shrapnel wound to his thigh in 1916. He returned to Britain and after a lengthy rehabilitation he ended the war as a physical training instructor, reaching the rank of sergeant. He also appeared as a guest player for Brentford during the war.

Frank Roberts was an English professional footballer who played for Manchester City between 1922 and 1928. He could play either as an inside forward or a centre forward.

Leonard Stephen Davies was a Welsh professional footballer. Born in Cardiff, he trained as a marine engineer before becoming a footballer, making his senior debut for his hometown club Cardiff City in 1919 in the Southern Football League. Cardiff joined the Football League the following year but Davies remained a reserve until establishing himself in the first team in late 1932. He scored Cardiff's first hat-trick in the Football League in January 1922 and was the club's top scorer in all competitions during the campaign.

Gordon John Davies is a Welsh former international footballer. He is the record goalscorer for Fulham and earned 16 caps for Wales between 1979 and 1986, scoring 2 international goals. 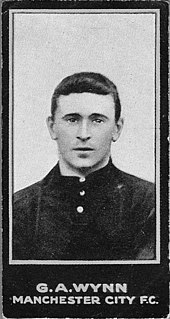 George Arthur Wynn was a Welsh professional footballer who played as a forward or as a half back for Oswestry United, Wrexham, Manchester City, Coventry City and Halifax Town. He also won 12 caps for Wales. He had a record of being an accomplished finisher in and around the box, his seasons' tallies laying claim to that.

Stuart Grenville Williams was a Welsh international footballer who played as a defender. He played his club football for Wrexham, West Bromwich Albion and Southampton.

William Davies was a Welsh footballer who played as a centre forward for Wrexham and Blackburn Rovers in the era prior to World War I as well as making eleven appearances for Wales.

Albert Gray was a Welsh international footballer who played as goalkeeper for various clubs in the 1920s and 1930s, including Oldham Athletic, Manchester City, Tranmere Rovers and Chester. For his country, he made 24 appearances between 1924 and 1938, helping Wales win the British Home Championship three times.

Ehud Rogers, commonly known as Tim Rogers, was a Welsh footballer who scored 17 goals from 84 appearances in the Football League playing for Wrexham, Arsenal and Newcastle United in the 1930s and 1940s. An outside right, Rogers appeared for Swansea Town in the abandoned 1939–40 Football League season, and played non-league football for Weston Rhyn, Llanerch Celts, Chirk, and Oswestry Town. Internationally, Rogers was capped for the Wales Amateur XI and played twice for his country in wartime internationals.

Edward Frederick Robbins was a Welsh football administrator who was the secretary of the Football Association of Wales from 1909 to his death in 1946. He remains the longest serving secretary in the organisation's history.

The 1928–29 season was the 28th season of competitive football played by Cardiff City F.C. and the team's eighth consecutive year in the First Division of the Football League. Having finished in sixth place the previous year, the team had a significantly worse season after being plagued by injuries to several first team players. Despite conceding the fewest goals in the league, they were relegated from the First Division after finishing bottom.