He provided musical direction for the ceremonies of the XI Commonwealth Games, EXPO ’86, the World University Games, the XV Olympic Winter Games, and for countless television shows. He produced and/or conducted command performances for Her Majesty the Queen and the Royal Family, and for President Ronald Reagan. He was a member of the A. F. of M., ACTRA, the National Academy of Recording Arts & Sciences (U.S.), the Canadian Academy of Recording Arts & Sciences, and of the Academy of Canadian Cinema & Television. Banks made his jazz-playing debut in 1950 in the touring band of saxophonist Don (D. T.) Thompson. He played jazz throughout North America, Western and Central Europe, Japan, and Southeast Asia. In 1983 his quintet became the first jazz band to tour in continental China since the 1949 revolution.

Before being called to the Senate of Canada, Tommy Banks served as chair of the Music Committee of the Board of Governors of Alberta College; he was founding chairman of the Alberta Foundation for the Performing Arts; chair of the Music Program at Grant MacEwan Community College; of the Edmonton Concert Hall Foundation; of the Instrumental Jazz Division of MusicFest Canada (North America’s largest music festival organization); of the B. & B. Foundation for the Theatrical & Musical Arts of Alberta; member of the board of the CKUA Radio Network Foundation; Honorary chair of the Alberta Heart Fund; an Honorary member of Cosmopolitan International and of Rotary International (of which he was a Paul Harris Fellow).

Senator Banks was appointed to the Senate by Governor General Adrienne Clarkson at the recommendation of Prime Minister Jean Chrétien in 2000. He represented Alberta, sitting as a Liberal. In the Senate, he served as a member of the Standing Committee on National Finance, of the Special Committee on Illegal Drugs, of the Standing Committee on National Security and Defence (SCONSAD) and on its steering committee, and as chair of the Subcommittee on Veterans’ Affairs. In each of the 37th, 38th, and 39th Parliaments he was elected Chair of the Standing Committee on Energy, the Environment, and Natural Resources. In the 37th and 38th Parliaments he served as Chair of the Alberta Liberal Parliamentary Caucus. Following dissolution of the 37th Parliament Senator Banks was named to an all-party Committee of Parliamentarians from both Houses, given the task of advising the Government on the setting up of parliamentary oversight of security intelligence matters. He served on an ad hoc basis on several additional committees of the Senate. He was vice-chair of the Caucus task force on urban issues that produced Canada's Urban Strategy - a Blueprint for Action which Report led to an important national debate.

As a former senator, Banks was entitled to be styled The Honourable for life.

Banks won the Sir Frederick Haultain Prize, the 1979 Juno Award for Best Jazz Album, the 1992 Gemini Award for Best Performance in a Variety Program (with k.d. Lang, for their performance at the Canadian Country Music Awards). [3]

Banks received an ACTRA Lifetime Achievement Award, as well as an Alberta Recording Industry Award of Distinction [1] and the 2010 SOCAN Special Achievement Award. [4] His wife Ida and he were honorary co-chairs for Northern Alberta of the CKUA Radio Network Capital Campaign, and board members of Wellspring Edmonton. 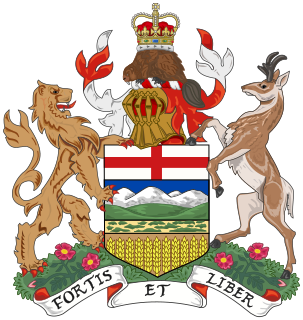 Alberta has a diverse music scene of pop, rock, country, jazz, folk, caribbean, classical, and blues music. Music festivals in the Summers are representing these genres. Choral music, ethnic music of many nationalities, all are found in Alberta.

The CKUA Radio Network is a Canadian donor-funded community radio network based in Edmonton, Alberta. Originally located on the campus of the University of Alberta in Edmonton, it was the first public broadcaster in Canada when it began broadcasting in 1927. It now broadcasts from studios in downtown Edmonton, and as of fall 2016 has added a studio in Calgary's National Music Centre. CKUA's primary station is CKUA-FM, located on 94.9 FM in Edmonton, and the station operates fifteen rebroadcasters to serve the remainder of the province.

Grant Mitchell is a Canadian politician and businessman. Over his career, he was leader of the Alberta Liberal Party and as a member of the Senate of Canada.

The Edmonton Symphony Orchestra (ESO) is a Canadian orchestra based in Edmonton, Alberta. As the professional orchestra of Alberta's creative capital city it presents over 85 concerts a year of symphonic music in all genres, from classical to country. Currently in its 68th season, the orchestra is composed of 56 core professional musicians who perform 42 weeks per season and who play an active role in the musical life of Edmonton and elsewhere as performers, teachers and recording artists. The ESO also performs as the orchestra for Edmonton Opera and Alberta Ballet productions, and its recordings are regularly heard across Canada on CBC Radio 2.

Jan Randall is a Canadian musician. Self taught as a young child, he started playing professionally in bands while still in high school, and after receiving formal classical and jazz training as a composer and arranger went on to an extensive career in original music for broadcast and improvisational music for comedy theatre while continuing as a freelance sideman and sometimes band leader or music director.

Holger Petersen, is a Canadian businessman, record producer and radio broadcaster. He founded the independent roots music record label Stony Plain Records in 1975 with partner Alvin Jahns. The label was sold to True North/Linus Music in 2018, but Petersen continues to act as executive producer on many recording projects. He was born in Pellworm Island, West Germany.

Norman Mervyn Barrington-Foote is a Canadian musician, songwriter, and comedian. Foote is originally from Vancouver, British Columbia, Canada. He has been nominated for four Juno Awards for Best Children's Album in 1990, 1993, 2001, and won in 2010. He has written for Walt Disney Records, Shari Lewis, CBC's syndicated TV show Scoop and Doozie, and Koba Entertainment, with productions including Nelvana's Little Bear Live, Max and Ruby live on stage shows, Toopy and Binoo in The Marshmallow Moon and Backyardigans Live.

Ann Vriend is a Canadian singer-songwriter and pianist based in Edmonton, Alberta.

Paul John Guloien is a Canadian jazz saxophonist. He has won one Juno award as a solo artist, and one for his work with the Rob McConnell Tentet.

Maria Dunn is a twice Juno-nominated Canadian songwriter and musician. She has been described as "an arrestingly powerful singer-songwriter who writes great historical and social commentary." Her music blends Celtic folk with North American bluegrass and country influences.

Charles Cozens is involved in the music industry in Canada as an arranger for solo artists; a composer writing in multiple genres for diverse organizations including chamber ensembles, musical theatre, and television; a conductor and producer of crossover orchestral shows; a performer on piano and accordion in jazz, classical, and pop styles; and as a recording artist and producer.