Barber attended Todd's Nook School. [9] He served as a private in the Football Battalion of the Middlesex Regiment during the First World War and saw action at Delville Wood and Waterlot Farm in the summer of 1916, [2] before suffering gunshot wounds to the legs at Guillemont. [10] Barber was evacuated to Britain and after recovering in Aberdeen, [10] he spent another period in hospital suffering from pleurisy. [11] He was later transferred to the Labour Corps and also worked in a munitions factory in Glasgow. [2] Barber died of tuberculosis in 1925. [2]

Walsall Football Club is a professional association football club based in the town of Walsall, West Midlands, England. The team competes in League Two, the fourth tier of the English football league system. The club's nickname, "The Saddlers", reflects Walsall's status as a traditional centre for saddle manufacture. Walsall moved into their Bescot Stadium in 1990, having previously played at nearby Fellows Park for almost a century. The team play in a red and white kit and their club crest features a swift. They hold rivalries with nearby Wolverhampton Wanderers and West Bromwich Albion, as well as farther away but more regularly contested rivalries with Coventry City, Shrewsbury Town and Port Vale. 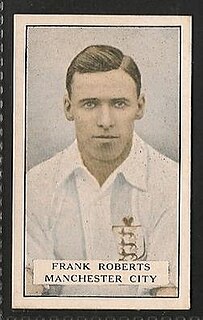 Frank Roberts was an English professional footballer who played for Manchester City between 1922 and 1928. He could play either as an inside forward or a centre forward.

Gershom Cox was an English professional footballer who played as a full-back for Aston Villa from 1887 to 1893.

George WilliamCook, sometimes known as Billy Cook, was an English professional football inside left, best remembered for his spells in the Football League with Huddersfield Town and Aston Villa.

Roy Thomas Pritchard was an English footballer who played 247 league games at full back in the Football League for Wolverhampton Wanderers, Aston Villa, Notts County, and Port Vale. He also played war-time football for Wolves, Mansfield Town, Notts County, Swindon Town and Walsall, and later played Southern League football for Wellington Town. He won the Fourth Division title with Port Vale in 1958–59, and won both the FA Cup with Wolves in 1949, as well as the First Division title in 1953–54.

Terence PercivalHanney was an English football player and manager. 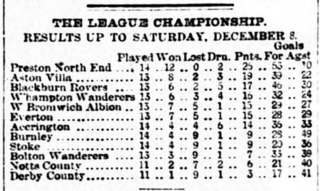 The 1888–89 season was the first season of competitive league football in the history of English football club Wolverhampton Wanderers. They played in the inaugural season of the newly formed Football League. The club finished in third place in the league, and as runners-up in the FA Cup. 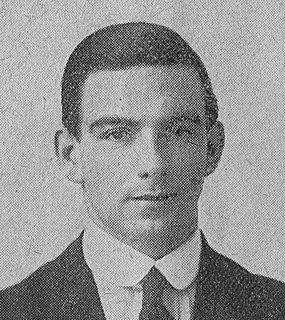 Reginald Boyne was a New Zealand professional footballer who played as an inside forward in the Football League for Aston Villa and Brentford.

Samuel Herbert Morris was an English professional footballer who played in the Football League for Brentford as a wing half.

Leslie Mervyn Boulter was a Welsh professional football inside left, best remembered for his time in the Football League with Charlton Athletic, with whom he ascended from the Third Division South to the First Division in successive seasons in the mid-1930s. He scored on his only appearance for Wales at international level.

William Webber Walter Gerrish, sometimes known as Willie Gerrish, was an English professional footballer who played as an inside forward in the Football League for Aston Villa and Preston North End.