Thomas Blackstock (1882 – 8 April 1907) was a Scottish footballer who played as a defender. He was born in Kirkcaldy and played for the Dunniker Rangers, Manchester United, Blue Bell, Raith Rovers, Leith Athletic, and Cowdenbeath. On 8 April 1907, he died on the field while playing for Manchester United against St. Helens after sustaining a head injury and collapsing when heading the ball.

The grandson of Charlie Roberts has stated that it was Blackstock's death, and the lack of support for his family, which led Roberts and teammate Billy Meredith to form the Association of Football Players' and Trainers' Union. [1]

Sir Robert Charlton is an English former footballer who played as a midfielder. He is regarded as one of the greatest players of all time, and was a member of the England team that won the 1966 FIFA World Cup, the year he also won the Ballon d'Or. He played almost all of his club football at Manchester United, where he became renowned for his attacking instincts, his passing abilities from midfield and his ferocious long-range shot, as well as his fitness and stamina. He was cautioned only twice in his career; once against Argentina in the 1966 World Cup, and once in a league match against Chelsea. His elder brother Jack, who was also in the World Cup-winning team, is a former defender for Leeds United and international manager.

Paul Scholes is an English football coach and former player, as well as a co-owner of Salford City. He spent his entire professional playing career with Manchester United, for whom he scored over 150 goals in more than 700 appearances between 1993 and 2013. His first managerial position was at Oldham Athletic, for 31 days in February and March 2019.

Wesley Michael Brown is an English professional footballer who last played as a defender for Indian club Kerala Blasters.

Denis Law is a Scottish former footballer who played as a forward. His career as a football player began at Second Division Huddersfield Town in 1956. After four years at Huddersfield, he was signed by Manchester City for an estimated transfer fee of £55,000, which set a new British record. Law spent one year there before Torino bought him for £110,000, this time setting a new record fee for a transfer involving a British player. Although he played well in Italy, he found it difficult to settle there and signed for Manchester United in 1962, setting another British record transfer fee of £115,000.

Dexter Anthony Titus Blackstock is a former professional footballer who played as a striker. He played most notably for Queens Park Rangers and Nottingham Forest.

Anthony Peter Dunne was an Irish footballer who played as a left-back. Born in Dublin, he began his career with youth side Stella Maris before signing for Drumcondra-based Shelbourne, with whom he won the FAI Cup in his second year in the senior team in 1960. That year, he moved to England to play for Manchester United, for whom he made more than 500 appearances in 13 years, winning the First Division in 1965 and 1967, the FA Cup in 1963 and the European Cup in 1968. After being released in 1973, he signed for Bolton Wanderers, making another almost 200 appearances in six years, before playing a single season with the Detroit Express in the North American Soccer League in 1979. Dunne won 33 caps for the Republic of Ireland between 1962 and 1975, and was named Irish Footballer of the Year in 1969. After retiring, he had a brief spell as manager of Norwegian club Steinkjer FK in 1982–83.

Enoch James West was an English footballer who played as a Centre Forward for Nottingham Forest and Manchester United before being banned for match fixing.

Patrice Latyr Evra is a French football coach and former professional player. Originally a forward, he primarily played as a left-back. Evra, whom manager Sir Alex Ferguson praised for his leadership, also describing him as one of the best left-backs in Europe, served as captain for both Manchester United and the France national team. 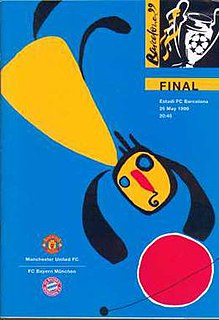 The 1999 UEFA Champions League Final was an association football match between Manchester United of England and Bayern Munich of Germany, played at Camp Nou in Barcelona, Spain, on 26 May 1999, to determine the winner of the 1998–99 UEFA Champions League. Injury time goals from Manchester United's Teddy Sheringham and Ole Gunnar Solskjær cancelled out Mario Basler's early goal to give Manchester United a 2–1 win. The victory completed a treble-winning season for Manchester United, after they had won the Premier League and FA Cup. Bayern were also playing for a treble, having won the Bundesliga and reached the DFB-Pokal final, although they went on to lose that match.

Alexander Bell, also known as Sandy Bell, was a South African-born Scottish footballer who played as a wing half.

Robert PollockBonthron was a Scottish professional footballer who played as a right-back for Manchester United, Sunderland and Birmingham in the Football League.

The 2008 UEFA Champions League Final was a football match that took place on Wednesday, 21 May 2008, at the Luzhniki Stadium in Moscow, Russia, to determine the winner of the 2007–08 UEFA Champions League. It was contested by Manchester United and Chelsea, making it an all-English club final for the first time in the history of the competition. This was only the third time that two clubs from the same country had contested the final; the others being the 2000 and 2003 finals. It was the first European Cup final played in Russia, and hence the easternmost final in the tournament's history. It also marked the 100th anniversary of Manchester United's first league triumph, the 50th anniversary of the Munich air disaster, and the 40th anniversary of United's first European Cup triumph in 1968. It was Manchester United's third European Cup final after 1968 and 1999, while it was Chelsea's first.

The 1908 FA Charity Shield was the first Charity Shield, a football match contested by the winners of the previous season's Football League and Southern League competitions. It was intended as a replacement for the Sheriff of London Charity Shield, after The Football Association declined to provide a professional club to the organisers of that event for the annual amateurs vs. professionals match. The new match was subsequently arranged to take place at Chelsea F.C.'s home ground, Stamford Bridge. Following the conclusion of the respective leagues, 1907–08 Football League winners Manchester United were scheduled to play against 1907–08 Southern League champions Queens Park Rangers.

Christopher Lloyd Smalling is an English professional footballer who plays as a centre-back for Serie A club Roma, on loan from Manchester United of the Premier League, and the England national team.

The 2018 FA Cup Final was the final match of the 2017–18 FA Cup and the 137th final of the FA Cup, the world's oldest football cup competition. It was played at Wembley Stadium in London, England on 19 May 2018 between Manchester United and Chelsea. It was the second successive final for Chelsea following their defeat by Arsenal the previous year.