Thomas Ross Bond (September 16, 1926 – September 24, 2005) was an American actor. Bond was best known for his work as a child actor for two nonconsecutive periods on Our Gang (Little Rascals) comedies (first as "Tommy" and later as "Butch"). Also, he is noted for being the first actor to appear onscreen as "Superman's pal" Jimmy Olsen, having portrayed the character in the film serials Superman (1948) and Atom Man vs. Superman (1950).

Early years and Our Gang

Born in Dallas, Texas, Bond got his start in 1931 at the age of five when a talent scout for Hal Roach studios approached him as he was leaving a Dallas cinema [1] with his mother. The scout asked him if he would like to act in films because he "had a great face" and set up an appointment with Hal Roach in Los Angeles. Hal Roach was gathering new talent for his popular Our Gang comedies. Bond's grandmother Jane Quin Sauter volunteered to drive the boy to L.A. by motor car. This occurred in the spring of 1931, in the depth of the Great Depression. It proved to be a grueling journey, punctuated by flash floods and encounters with tarantulas, on mostly dirt roads from Dallas to L.A.[ citation needed ]

Bond was hired at Hal Roach Studios for the Our Gang series in the summer of 1931 to begin work that upcoming fall, at around the same time as George "Spanky" McFarland was hired. Bond worked in Our Gang for two years, alternately appearing as a supporting character and a background actor. His speaking roles increased by 1934, including his most substantive role to this point as the gang's band conductor in Mike Fright . In late 1934, Bond left the series and returned to public school, still earning periodic bit parts in Hollywood productions.

Bond returned to Our Gang on a recurring basis late in 1936, when Roach hired him to play "Butch", the neighborhood bully. In one short, his mother called him "Tommy", apparently indicating that "Butch" was a nickname. Bond's first short as Butch was Glove Taps . Besides filling the role of the archetypal Our Gang bully, the Butch character also regularly competed with meek Alfalfa (Carl Switzer) for the affections of his sweetheart Darla (Darla Hood). While in Our Gang, Bond appeared in a number of outside films, such as those featuring fellow Hal Roach Studios comedians Charley Chase and Laurel and Hardy.

As Butch, Bond remained with Our Gang an additional three years, staying with the series when it moved to Metro-Goldwyn-Mayer in 1938. His final Our Gang short, Bubbling Troubles , was released in 1940; Bond continued to work in other MGM productions following his departure from Our Gang. In total, Tommy Bond appeared in 27 Our Gang shorts - 13 as "Tommy" and 14 as "Butch".

In 1951, Bond graduated from college and quit acting, but remained in show business in the areas of television directing and production, and worked with individuals such as Norman Lear, George Schlatter, and many others. He worked at Metromedia owned Channel 11, KTTV (now owned and operated by Fox) in Los Angeles from the 1950s to the early 1970s. He then went to work for Capital Cities Communications' CBS affiliate Channel 30 KFSN (now owned and operated and affiliated with ABC) in Fresno from the early 1970s to 1991. Tommy also worked as a prop manager on Rowan & Martin's Laugh-In .

During the 1960s Bond was an active member of Emmanuel Lutheran Church in North Hollywood where a number of his Hollywood friends and colleagues attended. Together, they were instrumental in the production and presentation of the annual Christmas Pageant presented on the grounds of Emmanuel's school Laurel Hall. The production, which involved a cast of several hundred, a chariot and horses from Spahn's Movie Ranch, numerous other animals and professional Hollywood sets and lighting, was presented each year during the Christmas season for several weeks leading up to Christmas. Grandstand style bleachers were installed that seated about 1000 guests. Highlights of the pageant included a horse-driven chariot and Roman soldiers on horseback riding through the gates of Bethlehem to proclaim the census requiring Jews to register in their hometowns. Bond was instrumental in arranging for the production to be filmed and aired on Metromedia owned Channel 11, KTTV in about 1965.

Bond retired from television in 1991. In his latter years he lived in the Fresno and Madera Ranchos area, and served as a spokesman for a number of Our Gang-related materials. Bond published his autobiography, Darn Right It's Butch: Memories of Our Gang/The Little Rascals, with the help of Fresno teacher, film historian and co-author Ron Genini, in 1994. Tommy's son, Thomas R. Bond II "Butch, Jr.", who is a film and television producer, worked with his father in their family production company, the American Mutoscope and Biograph Company. The senior Bond also hosted The Rascals, a documentary on the life and times of the Little Rascals .

Throughout his lifetime, Bond appeared in 73 films, was a charter member of the Screen Actors Guild, joining in 1937, and worked with many Hollywood stars in the years of 1933 to 1951, including James Stewart, Eleanor Powell, Ray Bolger, Frank Morgan, and Eddie Cantor among many others.

In 2004, a monument was dedicated at Hollywood and Vine commemorating the first movie made in Hollywood, made by the precursor to Bond's company, American Mutoscope and Biograph Company. Less than a year later, the 2.8 ton monument was stolen in April, 2005. It was recovered a year later in a nearby alley.[ citation needed ]

Bond died on September 24, 2005, [1] at age 79 due to complications from heart disease in Northridge, California. He is buried at Riverside National Cemetery in Riverside, California. 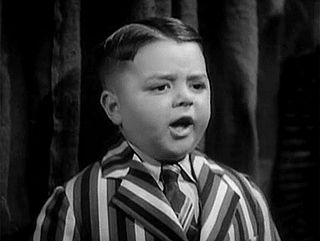 George McFarland was an American actor most famous for his appearances as a child as Spanky in the Our Gang series of short-subject comedies of the 1930s and 1940s. The Our Gang shorts were later syndicated to television as The Little Rascals.

Darla Jean Hood was an American child actress, best known as the leading lady in the Our Gang series from 1935 to 1941. She was born in Leedey, Oklahoma, the only child of music teacher Elizabeth Davner, and James Claude Hood, who worked in a bank. 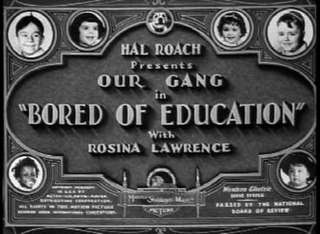 Bored of Education is a 1936 Our Gang short comedy film directed by Gordon Douglas. Produced by Hal Roach and released to theaters by Metro-Goldwyn-Mayer, it was the 146th entry in the Our Gang series to be released. 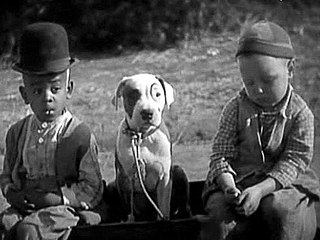 Pete the Pup was a character in Hal Roach's Our Gang comedies during the 1930s, otherwise known as "Pete, the dog with the ring around his eye", or simply "Petey". The second Pete was an American Staffordshire Terrier named Lucenay’s Peter. He was well known for having a circled eye which was added by Hollywood make-up artist Max Factor and credited as an oddity in Ripley's Believe It or Not. The original Pete was a UKC registered American Pit Bull Terrier named "Pal, the Wonder Dog", and had a natural ring almost completely around his right eye; dye was used to finish it off.

William "Billie" Thomas Jr. was an American child actor best remembered for portraying the character of Buckwheat in the Our Gang short films from 1934 until the series' end in 1944. He was a native of Los Angeles.

The Little Rascals is a 1994 American family comedy film produced by Amblin Entertainment, and released by Universal Pictures on August 5, 1994. The film is an adaptation of Hal Roach's Our Gang, a series of short films of the 1920s, 1930s, and 1940s which centered on the adventures of a group of neighborhood children. The film, with a screenplay by Paul Guay, Stephen Mazur, and Penelope Spheeris – who also directed – presents several of the Our Gang characters in an updated setting, and features re-interpretations of several of the original shorts. It is the first collaboration by Guay and Mazur, whose subsequent comedies were Liar Liar and Heartbreakers. Eugene Gordon Lee was an American child actor, most notable for appearing in the Our Gang comedies as Porky from 1935 to 1939. During his tenure in Our Gang, Porky originated the catchphrase "O-tay!", though it is commonly attributed to fellow character Buckwheat, played by Billie Thomas

Sidney Henry Kibrick is an American former child actor and real estate developer, most notable for appearing in the Hal Roach short subjects series Our Gang.

Darwood Kenneth Smith, also known as Darwood Kaye, was an American child actor most notable for his semi-regular role as the bookish rich kid Waldo in the Our Gang short subjects series from 1937 to 1940. As an adult, Smith became a Seventh-day Adventist pastor, ministering at several churches until his death in 2002. 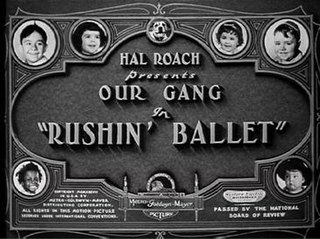 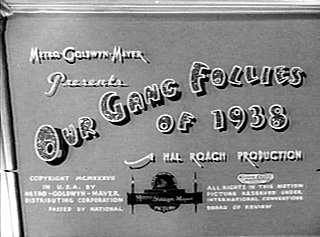 Came the Brawn is a 1938 Our Gang short comedy film directed by Gordon Douglas. Produced by Hal Roach and released to theaters by Metro-Goldwyn-Mayer, it was the 165th entry in the Our Gang series. 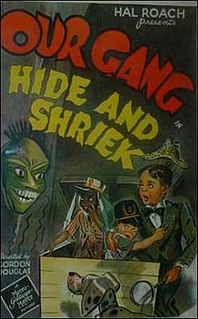 Hide and Shriek is a 1938 Our Gang short subject directed by Gordon Douglas. It was the 168th Our Gang entry in the series, and the last to involve series creator Hal Roach. 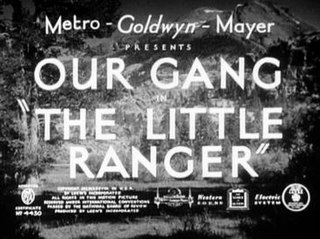 The Little Ranger is a 1938 Our Gang short comedy film directed by Gordon Douglas. It was the 169th short in the Our Gang series, and the first produced by Metro-Goldwyn-Mayer, who purchased the rights to the series from creator Hal Roach.

Harold Frederick Switzer was an American child actor, most notable for appearing in the Our Gang short subjects series as an extra. He was the older brother of gang member Carl "Alfalfa" Switzer, one of the series' most popular and best-remembered characters. 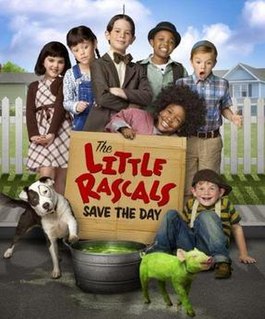 The Little Rascals Save the Day is a 2014 American direct-to-video comedy film released by Universal Pictures Home Entertainment. The film is the second motion picture film succeeding the major 1994 film, and it is an adaptation of Hal Roach's Our Gang, a series of short films of the 1920s, 1930s and 1940s which centered on the adventures of a group of neighborhood children.