In 1980, Carberry rode Tied Cottage in the Cheltenham Gold Cup. The horse finished the race first but Tied Cottage was later disqualified for testing positive for a banned substance. [2]

When he retired from riding, he started training.

Carberry married Pamela Moore in 1970. [4] Their children are: Thomas, Paul, Philip, Nina, Mark and Peter John. Paul won the 1998 Irish Grand National with BobbyJo and the 1999 Grand National (prior to the victory in the 1999 Grand National, the last victory by an Irish trained horse was in 1975), a race also won by Philip and Nina. The elder children are no longer National Hunt jockeys, but the youngest child, Peter John, continues to ride. Mark is the only one of Tommy's children that was not a jockey or a horse trainer. [5] Carberry died on 12 July 2017, aged 75. [6]

Golden Miller (1927–1957) was a Thoroughbred racehorse who is the most successful Cheltenham Gold Cup horse ever, winning the race in five consecutive years between 1932 and 1936. He also is the only horse to win both of the United Kingdom's premier steeplechase races - the Cheltenham Gold Cup and the Grand National - in the same year (1934).

L’Escargot (1963–1984) was a national hunt racehorse notable as being a Cheltenham Gold Cup and Grand National winner. He was also the horse who halted the winning run of Red Rum at the Aintree Grand National in 1975. L’Escargot was owned by Raymond R. Guest, and ridden by champion Irish jockey Tommy Carberry. He was trained by Dan Moore, and beat Red Rum by 15 lengths.

The 1975 Grand National was the 129th renewal of the Grand National horse race that took place at Aintree near Liverpool, England, on 5 April 1975. The race was won by 13/2 second-favourite L'Escargot, ridden by Tommy Carberry, in a time of nine minutes and 31.1 seconds and by a distance of 15 lengths over 7/2 favourite Red Rum, who was thus denied a third consecutive win.

Daryl Jacob is an Irish National Hunt jockey who rode for trainer Paul Nicholls as second jockey to Ruby Walsh. When Walsh left the Nicholas yard Jacob took over as principal rider. He won at the Cheltenham festival for the first time in 2011 on Zarkandar in the Triumph Hurdle. His second Cheltenham Festival win was in 2014 on Lac Fontana in the Vincent O Brien County Handicap Hurdle on the last day of the festival. However, before the start of the next race he suffered a broken leg, knee and elbow after Port Melon crashed into the rail.

Katie Walsh is a retired Irish jockey who, in 2012, came third in that year's Grand National on Seabass, giving her the highest finish for a female competitor. Walsh is the daughter of amateur jump jockey, trainer and television pundit, Ted Walsh and the sister of top class jump jockey, Ruby Walsh. To date she has ridden three winners at the Cheltenham festival.

Bobby Beasley was an Irish jockey and horse trainer.

Easter Hero (1920–1948) was an Irish-bred British-trained racehorse who won the Cheltenham Gold Cup in 1929 and 1930 and made three unsuccessful attempts to win the Grand National. He showed little early promise and was passed from owner to owner before beginning to display ability in 1927. Wins in the Becher Chase and the Coventry Chase established him as a leading steeplechaser and he was bought by Alfred Loewenstein with the aim of winning the National. In his first attempt at the race he fell at the eighth and brought the field to a virtual halt after becoming trapped in the ditch in front of the fence. 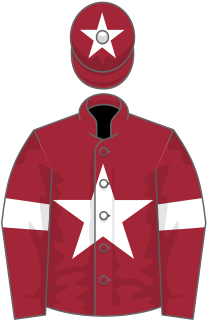