Thomas McDonald D'Arcy (22 June 1932 – 20 September 1985) was a Scottish professional footballer who played as a centre forward.

Born in Edinburgh, D'Arcy played junior football with Armadale Thistle before turning professional with Hibernian in 1953. He later played for Southend United, Queen of the South and Stranraer, before retiring in 1960. 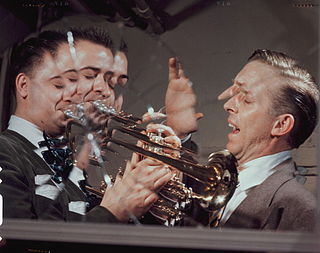 Marion "Buddy" Childers was an American jazz trumpeter, composer and ensemble leader. Childers became famous in 1942 at the age of 16, when Stan Kenton hired him to be the lead trumpet in his band.

Thomas Younger was a Scottish footballer who played as a goalkeeper for Hibernian, Liverpool, Falkirk, Leeds United, Stoke City and the Scotland national team.

Thomas Ewing is a Scottish former professional footballer. He represented the Scottish Football League XI and was capped twice by Scotland.

The 1938–39 British Home Championship was a football tournament played between the British Home Nations during the 1938–39 seasons and was the last edition of the tournament to be completed before the outbreak of the Second World War in August 1939 suspended all professional sporting competitions. As a result, this was the final opportunity for many spectators to see their sporting heroes in an international setting, as players such as Wales's Dai Astley or Scotland's Tommy Walker would no longer be young enough to play for their country by the time professional football began again in 1946.

Dykehead Football Club was a football club based in the Dykehead area of Shotts, playing their home games at Parkside. The club were members of the Scottish Football League Third Division.

Tommy Millar was a Scottish professional footballer, who played as a right back.

Thomas Coakley is a Scottish former football player and coach. Coakley, who played as a right winger, made 95 league appearances in a professional career which saw him play in Scotland, England, and the United States. After retiring as a player, Coakley became a football coach.

Seamus Donal D'Arcy, known as Jimmy D'Arcy or sometimes Paddy D'Arcy, was a Northern Irish international footballer who played as an inside forward.

Arnold Joseph D'Arcy is an English retired professional footballer who played as a left winger in the Football League.

Dennis D'Arcy is a Scottish former professional footballer who played as a central defender.

Thomas Montgomerie Duncan is a Scottish retired professional football outside left, best remembered for his 11 years in the Scottish League with Airdrieonians. He also briefly played in the Football League on loan at Newport County. Duncan later managed Queen's Park between November 1969 and May 1974.

Sarah D'Arcy is an Australian rules footballer with the Richmond Football Club in the AFL Women's competition (AFLW). Previously, she played four seasons at Collingwood including in the club's inaugural team.