An attack-minded wing half, capable of taking a firm grip on proceedings in the middle of the park, he began his senior career as an inside forward with Shamrock Rovers in 1951. However, when the Hoops won the league championship in 1953–54, Dunne was playing in the Leinster Senior League, although he had been kept on as a Rovers player.[ citation needed ]

At the end of that season he left Milltown to join St Patricks Athletic. The son of Jimmy Dunne, who played for Arsenal in the 1930s, he helped St Pats take the league crown from Rovers in 1954–55, and helped them retain it the following year.

Dunne's form for Pats saw him win full international honours. He made his Ireland debut against Holland in Rotterdam's Feijenoord Stadion in May 1956 in a 4–1 win . They also won the two other times he played for his country, against Denmark and West Germany in 1957. He also won 2 'B' caps in 1958. 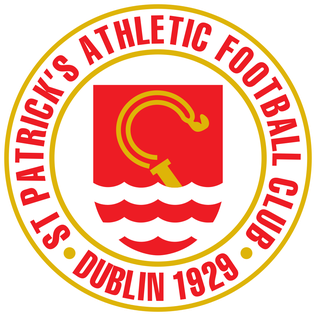 St Patrick's Athletic Football Club is a professional Irish association football club based in Inchicore, Dublin, that plays in the Irish Premier Division. Founded in May 1929, they played originally in the Phoenix Park but they moved to their current ground Richmond Park in 1930. 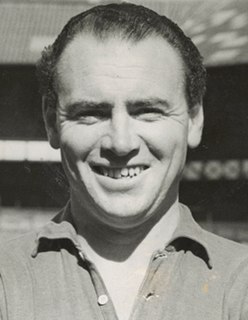 Stephen Kenny is a football manager and former player who is currently manager of the Republic of Ireland. He had formerly managed Longford Town, Bohemians, Derry City, Dunfermline Athletic, Shamrock Rovers and Dundalk. He is one of Ireland's most successful ever managers having won 8 major trophies with Dundalk, and boasts extensive experience in European competition.

The Dublin City Cup is a defunct Irish football tournament which was played for by all League of Ireland sides. It ran from 1933 and ran uninterrupted until 1973. In season 1975/76 it was revived and played for by sides who did not reach the League of Ireland Cup quarter finals. In 1983/84 it was revived again but only 8 teams were invited to play, the 6 Dublin sides along with Drogheda United and Dundalk.

Thomas Joseph "Tommy" Traynor was an Irish footballer who played his entire English professional career for Southampton between 1952 and 1966.

Bobby Gilbert is an Irish former footballer who played for, among others, Derry City and Shamrock Rovers. Gilbert scored in European competitions for both City and Rovers. As an international he also played for the Republic of Ireland.

Keith Dunne is an Irish footballer. Dunne is a versatile right sided winger who can play on either wing and he also has experience playing as a striker.

The 2013 season is Cork City F.C.'s 29th season competing in the League of Ireland, and 2nd consecutive season in the Premier Division. Tommy Dunne began his 4th year in charge of city in the 2013 season however it was confirmed in a club statement on 3 August 2013 that Cork City FC had parted company with the Dublin native after a bad run of results. 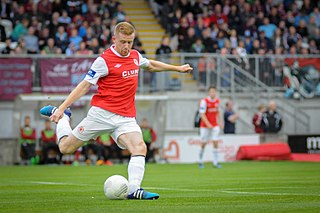 The 2015 FAI Senior Challenge Cup, also known as the 2015 FAI Irish Daily Mail Senior Cup for sponsorship reasons, was the 95th season of the national football competition of the Republic of Ireland. The winners of the competition earned a spot in the first qualifying round of the 2016–17 UEFA Europa League.

Darragh Markey is an Irish professional footballer playing for League of Ireland Premier Division club, St Patrick's Athletic, the club he started his professional career with.

Georgie Poynton is an Irish professional footballer playing for League of Ireland Premier Division club, Shelbourne. He has previously played for Waterford for a season, St Patrick's Athletic for 2 months as well as his first senior club Dundalk for 5 years including a season on loan at Bohemians.

Dundalk entered the 1987–88 season as the League Cup holders from 1986–87, having won that competition and finished as runners-up in both league and FAI Cup. 1987–88 was Turlough O'Connor's third season as manager, and was Dundalk's 62nd consecutive season in the top tier of Irish football.

Dundalk entered the 1966–67 season on the back of a disappointing eighth place finish in the League and a sixth place finish in the Shield the previous season. 1966–67 was Alan Fox's first season as player-coach, having been appointed by the club's new board of directors in August. It was Dundalk's 41st consecutive season in the top tier of Irish football.