Colognian or Kölsch is a small set of very closely related dialects, or variants, of the Ripuarian group of dialects of the Central German group of languages. These dialects are spoken in the area covered by the Archdiocese and former Electorate of Cologne reaching from Neuss in the north to just south of Bonn, west to Düren and east to Olpe in northwest Germany.

The Akademie för uns Kölsche Sproch was established in 1983 by the Stadtsparkasse Köln. As part of the bank's foundation for culture, this academy campaigns for the preservation and promotion of the Kölsch dialect as a language. 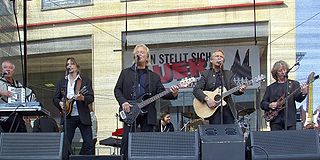 "Viva Colonia" is a 2003 song and album by the German band De Höhner. The song is sung in a language which resembles the local dialect of Cologne, Kölsch, but differs in that the lyrics and refrain do not have many particularly Kölsch words, and thus are relatively easily understood by all German-language speakers.

Made in Brazil (MIBR) is a professional esports organization with players competing in Counter-Strike: Global Offensive and Tom Clancy's Rainbow Six: Siege. It was a member of the G7 Teams. MIBR was founded in March 1, 2003, in the city of Rio de Janeiro, when the Brazilian businessman Paulo Velloso decided to invest in his son's dream. The organization was dissolved in 2012, but announced it was making a return in March 2016.

Below are listed all participating squads of the 2010 FIVB Women's Volleyball World Championship, held in several cities in Japan from 29 October to 14 November 2010.

Dicle University, is a public university located in Diyarbakır, Turkey, on the eastern side of the Tigris river. The university is one of the oldest and largest higher education institutions in southeastern Anatolia, Turkey.

This article covers the phonology of modern Colognian as spoken in the city of Cologne. Varieties spoken outside of Cologne are only briefly covered where appropriate. Historic precedent versions are not considered.