Thomas Gemmell (16 October 1943 – 2 March 2017) was a Scottish football player and manager. Although right-footed, he excelled as a left-sided fullback and had powerful shooting ability. Gemmell is best known as one of the Celtic side who won the 1966–67 European Cup; he scored the first Celtic goal in the final. Gemmell played 18 times for Scotland, and also played for Nottingham Forest, Miami Toros and Dundee. After retiring as a player in 1977, Gemmell managed Dundee and Albion Rovers.

In October 1961, Gemmell joined Celtic from Coltness United; [1] he signed youth terms on the same day as right winger Jimmy Johnstone, who lived a few miles away and would also have a long association with the club. [2] He was one of the 'Lisbon Lions' who won the 1967 European Cup Final against Inter Milan, a final in which Gemmell scored an equalising goal with a shot from outside the penalty area. [3] Ironically, Gemmell should not have been in position to score the goal, as he had ignored team orders for one full-back to stay in defence at all times; the right back Jim Craig had already ventured forward, and it was he who played the square ball for Gemmell to shoot, with both advancing on the Inter box. [2] He also scored in the 1970 European Cup Final in a defeat to Feyenoord, [4] [5] making him currently one of only three British footballers to score in two different European Cup Finals, the others being Phil Neal of Liverpool and Gareth Bale of Real Madrid. [6] [7]

In his book, Lion Heart, Gemmell revealed that, during his time at Celtic, he was on the receiving end of sectarian abuse from certain teammates; he and teammate Ian Young had been the target of "a handful" of colleagues who had wanted an all-Catholic team. [2] He also stated that he received verbal abuse on several occasions from some supporters of Old Firm rivals Rangers due to his perceived status as a 'turncoat' (as a Protestant who played for Celtic), such as when attending matches many years after retiring. [2]

In December 1971, Gemmell transferred to Nottingham Forest to cover for Liam O'Kane. At the end of that season Forest were relegated from the top flight. [12]

In 1973 he had a short stint with the Miami Toros in the North American Soccer League. He returned to Scotland, signing for Dundee in July 1973, and won the 1973 Scottish League Cup Final against former team Celtic. [13] He retired from playing in 1977. [9]

Gemmell made his international debut for Scotland against England at Hampden on 2 April 1966. [14] The following year on 15 April, he played in the famous Home Championship match where Scotland recorded a 3–2 victory over World Champions England at Wembley Stadium, ending that team's run of nineteen games without defeat. [15] He won 18 caps and scored one goal from the penalty spot against Cyprus in an 8–0 win in a 1970 World Cup qualifier. [9] [16] Gemmell's final appearance for Scotland came in 1971. [9]

In 1994, Gemmell sold his collection of Celtic medals at auction for £32,000; they were purchased by Glasgow businessman Willie Haughey, who has close ties with the club and loaned them back to Celtic to be put on display. [2] [20] He was inducted to the Scottish Football Hall of Fame in 2006. [21]

Gemmell died on 2 March 2017, aged 73, after a long illness. [8] [3] [22] His funeral was held on 10 March with a procession starting from Celtic Park, and was attended by former teammates, serving Celtic manager Brendan Rodgers and Rangers managing director Stewart Robertson. [23] 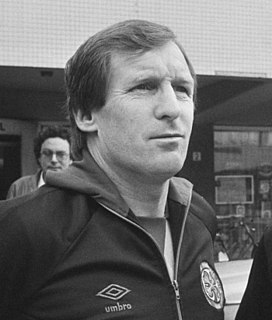 James Connolly Johnstone, nicknamed "Jinky", was a Scottish footballer who played as an outside right. Johnstone played for Celtic for 13 years, and was voted their best ever player by the club's fans in 2002. He scored 129 goals for Celtic in 515 appearances.

The Lisbon Lions is the nickname given to the Celtic team that won the European Cup at the Estádio Nacional near Lisbon, Portugal on 25 May 1967, defeating Inter Milan 2–1. All but two members of the 15 man squad were born within 10 miles of Celtic Park in Glasgow, Scotland. Celtic's style was the antithesis of the cynical, but highly effective, defensive style of Inter. Jimmy Johnstone described the team's style as "like the Dutch speeded-up".

Thomas Stephen Chalmers was a Scottish footballer who played as a centre-forward and spent the majority of his career with Celtic. He is the club's fifth-highest goalscorer with 236 goals and is considered one of their greatest players. He is particularly known for scoring the winning goal in the 1967 European Cup Final against Inter Milan. Chalmers later played for Morton and Partick Thistle. He also represented Scotland five times in international matches.

Robert Lennox, MBE is a Scottish former professional footballer who played for Celtic and was a member of their 1967 European Cup-winning team, known as the Lisbon Lions. He earned ten international caps for Scotland. In 2002, Celtic supporters voted him a member of the club's all-time greatest team.

Robert White Murdoch was a Scottish professional footballer, who played for Celtic, Middlesbrough and Scotland. Murdoch was one of the Lisbon Lions, the Celtic team who won the European Cup in 1967. He later managed Middlesbrough. 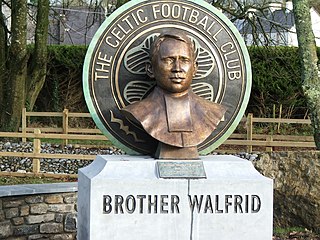 Celtic Football Club has always competed in the highest level of football in Scotland, currently the Scottish Premiership. The club was constituted in 1887, and played its first game in 1888. Celtic play home games at Celtic Park, having moved there from their original ground in 1892. The club quickly established itself as a dominant force in Scottish football, winning six successive league titles during the first decade of the 20th century. A fierce rivalry developed with Rangers, and the two clubs became known as the Old Firm.

The 1966–67 season was the 94th season of competitive football in Scotland and the 70th season of Scottish league football.

Eamonn John Bannon is a Scottish former internationalist footballer who played in midfield. His most successful seasons were with Dundee United where he won two league cups and the 1983 League Championship. Numerous runs with United in European football included playing in the 1983–84 European Cup semi final and the 1987 UEFA Cup Final.

James Philip Craig is a Scottish former footballer, who played as a right back. Most closely associated with Celtic, he was a member of their Lisbon Lions side which won the 1967 European Cup. 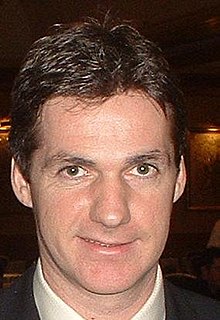 The 1967 European Cup Final was a football match between Italian team Inter Milan and Scottish team Celtic. It took place at the Estádio Nacional in Lisbon, Portugal on 25 May 1967 in front of a crowd of 45,000. It was the final of the 1966–67 European Cup, the premier club competition in Europe. The match was Celtic's first European final and Inter's third; they had won the tournament in two of the previous three years.

Iain John Ferguson is a Scottish former professional football striker. He developed a reputation for scoring important and from his powerful right foot shot, sometimes spectacular goals. He scored in a domestic cup final winning team with both Rangers and Motherwell. His goals against high-profile opponents in Europe include for Dundee United in away games at F.C. Barcelona and Borussia Mönchengladbach en route to his appearance in the 1987 UEFA Cup Final.

William O'Neill was a Scottish footballer who played for Celtic and Carlisle United as a full-back.

Celtic competed in five tournaments in the 1966–67 season. They won all five competitions and completed the only ever European Quintuple. Over the course of the season, Celtic scored a world record 196 goals in the major competitions they took part in.

Paul Chalmers is a Scottish former professional footballer who played as a striker for several clubs, primarily St Mirren in Scotland and Swansea City in the English leagues.