He was born in his own country, near Lakefield National Park. As children, he and his elder brother, George Musgrave, were hidden in mailbags by the station owner, Fredrick Sheppard, to avoid removal by police and welfare officers.

Together they founded the Ang-Gnarra Aboriginal Corporation at Laura, Queensland, the biennial Laura Festival of Traditional Dance and Culture, the Traditional Knowledge Recording Project (Mulong, with Victor Steffensen) [1] and the Cape York Land Council.

They campaigned to protect the world-renowned Quinkan rock art near Laura, where they carried out custodial duties for special places, including the rock art galleries. They shared their knowledge of the bush, their language and their customs with researchers and visitors. An example of the strength of their sharing was the work they did to share ways of recording traditional knowledge with Sámi communities  in Northern Finland. It would be difficult to find a piece of scholarly work on traditional language, culture or country in Cape York Peninsula that does not credit their expertise. [2] [1]

He spent many years working as a stockman on cattle properties on Cape York Peninsula which he loved but was only rarely paid for. He married Laura Gordon (née Banjo) in Laura and they had six children together. He later became a ranger and worked for many years caring for the rock art in the Laura region which was on his wife's country battling to protect it and helping to record and interpret the many stories and traditions about it and his own Kuku Thaypan country.

In 2005 he was awarded an honorary Doctorate of Letters by James Cook University for his ecological expertise along with his elder brother Dr. George Musgrave.

Cape York Peninsula is a large remote peninsula located in Far North Queensland, Australia. It is the largest unspoiled wilderness in northern Australia. The land is mostly flat and about half of the area is used for grazing cattle. The relatively undisturbed eucalyptus-wooded savannahs, tropical rainforests and other types of habitat are now recognized and preserved for their global environmental significance. Although much of the peninsula remains pristine, with a diverse repertoire of endemic flora and fauna, some of its wildlife may be threatened by industry and overgrazing as well as introduced species and weeds.

Laura is a rural town and locality in the Shire of Cook, Queensland, Australia. In the 2016 census the locality of Laura had a population of 228 people.

Mornington Island, also known as Kunhanhaa, is an island in the Gulf of Carpentaria in the Shire of Mornington, Queensland, Australia. It is the northernmost and largest of 22 islands that form the Wellesley Islands group. The largest town, Gununa, is in the southwestern part of the island. The Manowar and Rocky Islands Important Bird Area lies about 40 kilometres (25 mi) to the northwest of Mornington.

Wujal Wujal is a rural town and locality in the Wujal Wujal Aboriginal Shire, Queensland, Australia. In the 2016 census, Wujal Wujal had a population of 282 people. It is an Aboriginal community.

Far North Queensland (FNQ) is the northernmost part of the Australian state of Queensland. Its largest city is Cairns and it is dominated geographically by Cape York Peninsula, which stretches north to the Torres Strait, and west to the Gulf Country. The waters of Torres Strait include the only international border in the area contiguous with the Australian mainland, between Australia and Papua New Guinea.

Dr George Musgrave was an elder of the Kuku Thaypan clan and a famous Australian bush tracker. He was an Agu Alaya speaker. 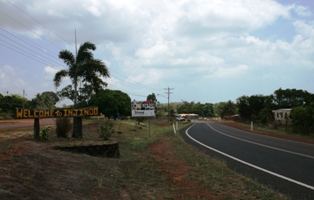 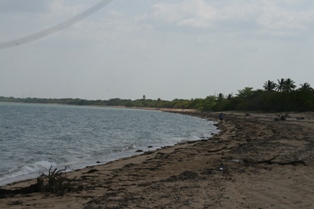 Kuku-Thaypan is an extinct Paman language spoken on the southwestern part of the Cape York Peninsula, Queensland in Australia, by the Kuku-Thaypan people. The language was sometimes called Alaya or Awu Alaya. Koko-Rarmul may have been a dialect, though Bowern (2012) lists Gugu-Rarmul and Kuku-Thaypan as separate languages. The last native speaker, Tommy George, died on 29 July 2016 in Cooktown Hospital.

Aghu Tharrnggala is an extinct Paman language of the Cape York Peninsula in Queensland, Australia. Like several languages in the area, it is often referred to as Gogo Mini (Kuku-Mini) 'good speech'. Some sources treat Ikarranggali, and Alngula (Alungul) as synonyms. However, they are distinct languages.

The Shire of Cook is a local government area in Far North Queensland, Australia. The Shire covers most of the eastern and central parts of Cape York Peninsula, the most northerly section of the Australian mainland.

Percy Trezise AM was an Australian pilot, painter, explorer and writer as well as, notably, a discoverer, documenter and historian of Aboriginal rock art. He was born in Tallangatta, Victoria but is associated especially with Far North Queensland and the rock art galleries of the Cape York Peninsula. He died in Cairns, Queensland.

The Kuku Nyungkal people are a group of Aboriginal Australians who are the original custodians of the coastal mountain slopes, wet tropical forests, waters, and waterfalls of the Upper Annan River, south of Cooktown, Queensland

The Aboriginal Shire of Pormpuraaw is a special local government area which is located on western Cape York Peninsula in Queensland, Australia. It is managed under a Deed of Grant in Trust under the Local Government Act 2004.

The Wujal Wujal Aboriginal Shire is a local government area in Far North Queensland, Australia. It is managed as a Deed of Grant in Trust under the Local Government Act 2004. 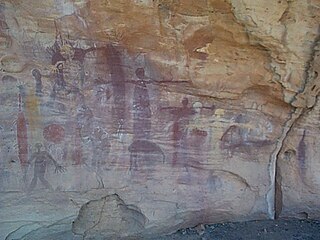 Quinkan rock art refers to a large body of locally, nationally and internationally significant Australian Aboriginal rock art of a style characterized by their unique representations of "Quinkans", found among the sandstone escarpments around the small town of Laura, Queensland. Quinkan Country was inscribed on the Australian National Heritage List on 10 November 2018.

The Pakadji people, also known by the southern tribal exonym as the Koko Yao, were an Indigenous Australian group of Cape York Peninsula in northern Queensland. The ethnonym Koko Yaʼo is said literally to mean 'talk, speech' (koko/kuku) 'this way' (yaʼo), though this has been questioned.

The Olkolo or Koko-olkola' are an Indigenous Australian people of central and eastern Cape York Peninsula in northern Queensland. According to Norman Tindale, they are to be distinguished from the Kokangol, higher up on the Alice River watershed.

The Kokangol (Koko-Gol), or Yuwula, are said to have been an Indigenous Australian people of Queensland. Some dispute this, suggesting the name may be a synonym for Aghu Tharnggala, or may simply be the name of a language consultant.