Born in Croydon, London, Hall was a professional cyclist between 1900 and 1914.

During the 1901 census, Hall was 24, living with his family at 104 Shepherd's Bush Road, London, his occupation was listed as cycle maker. His father, Nathaniel Hall, was a furniture retailer. [3]

Hall died aged 72 in 1949, his grave lies in Abney Park Cemetery in Stoke Newington, London, a few feet away from the statue of Dr Isaac Watts. The headstone inscription reads:

Sir Hubert Ferdinand Opperman, OBE, referred to as Oppy by Australian and French crowds, was an Australian cyclist and politician, whose endurance cycling feats in the 1920s and 1930s earned him international acclaim. 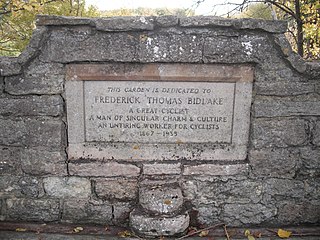 Frederick Thomas Bidlake was an English racing cyclist of the late 19th century, who became one of the most notable administrators of British road bicycle racing during the early 20th century. The annual Bidlake Memorial Prize, was instituted in his memory. He was a timekeeper in cycling, motorcycling and for seaplane races in the 1930s. 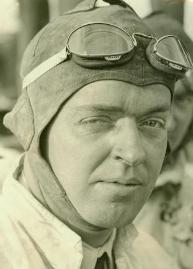 Thomas "Tommy" Milton was an American race car driver best known as the first two-time winner of the Indianapolis 500. He was notable for having only one functional eye, a disability that would have disqualified him from competing in modern motorsports.

Daniel Albone was an English inventor, manufacturer and cyclist. He invented the first successful light farm tractor, and the Ivel Safety bicycle.

George Pilkington Mills was the dominant English racing cyclist of his generation, and winner of the inaugural Bordeaux–Paris cycle race. He frequently rode from Land's End to John o' Groats, holding the world record time on six occasions between 1886 and 1895. He was a member of the Anfield and North Road cycling clubs. He later won races and broke records as a car racer and motorcycle rider.

William Frank Southall was an English racing cyclist who won silver medals for Great Britain in the individual road race at the 1928 Summer Olympics and a track cycling medal at the 1932 Summer Olympics in Los Angeles. He also represented Britain in world championships from 1926 to 1933.

Frederick Henry Grubb was a British road racing cyclist who competed in the 1912 Summer Olympics. He won silver medals in the individual road race and the team road race. In 1914, after he retired from racing, he established a bicycle manufacturing business (F.H.Grubb) in Brixton, London. By 1920 manufacturing had moved to Croydon and then in 1926 to Twickenham. In 1935 FHG Ltd was established in Wimbledon but by 1947 the F H Grubb name was back in use. Two years after his death the business was bought by Holdsworth, which used the Freddie Grubb brand until around 1978. 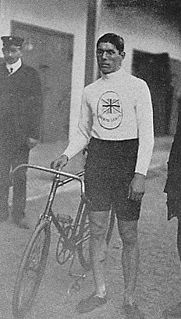 Leonard "Leon" Lewis Meredith was a British track and road racing cyclist who competed in the 1908 Summer Olympics, in the 1912 Summer Olympics, and in the 1920 Summer Olympics. He won seven world championships and set up one of Britain's largest cycle-parts companies and ran a roller-skating rink and ballroom.

Jimmy Michael, was a Welsh world cycling champion and one of the top riders in the sport for several years.

Robert "Bobby" Howe Walthour Sr was one of the best American professional cyclists of his era.

Len Hurst was renowned as a British long-distance athlete, both running and pedestrianism, although he started life as a brick-maker, and spent his last 29 years as a pub landlord. 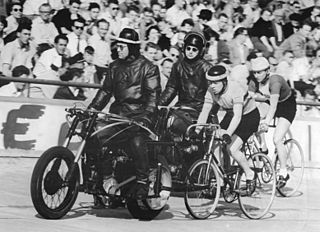 Motor-paced racing and motor-paced cycling refer to cycling behind a pacer in a car or more usually on a motorcycle. The cyclist follows as close as they can to benefit from the slipstream of their pacer. The first paced races were behind other cyclists, sometimes as many as five riders on the same tandem. Bordeaux-Paris and record attempts have been ridden behind cars. More usually races or training are behind motorcycles.

Adolph Verschueren was a Belgian cyclist. As a road cyclist, he won the Tour of Flanders in 1942 and the sixth stage of Tour de Suisse in 1949. 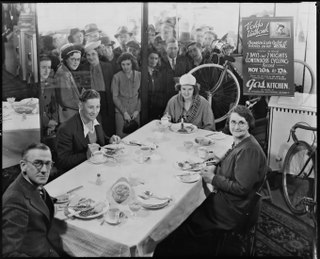 Oserick Bernard "Ossie" Nicholson was an Australian cyclist who twice held the World Endurance record for distance in a calendar year.