Thomas Paul Hinnershitz (April 6, 1912 – August 1, 1999) was an American race car driver. Hinnershitz was active through the 1930s, 1940s and 1950s on dirt, asphalt and boards, driving "Big Cars" (later Sprint Cars), at that time slightly smaller versions of Indianapolis cars that could be raced on half mile dirt race tracks.

He mainly raced his own cars (not for other owners) and he was the mechanic on his cars. [1] He was one of the first drivers to have car sponsorship. [1] Hinnershitz was known for racing wearing overalls, which drew in fans at fairgrounds races in Corn Belt states such as Iowa and the Minnesota. [1]

He was born Thomas Paul Hinnershitz on a farm near Oley, Pennsylvania. [3] He farmed a 63 acres (25 ha) farm on weekdays and raced on the weekend. [3]

Hinnershitz began racing in 1930 with a 1914 Model T at Reading Fairgrounds Speedway. [1] [2] The car cost him $25; he won his first race and $75 earned for the victory. [1] He later was quoted, "Boy, I was really rich then. That was the best investment I ever made in a race car." [1] His early career saw successes at Williams Grove Speedway and Reading Fairgrounds Speedway near his home in Pennsylvania. [1] He joined the AAA in 1932. [3]

He raced his midget car with a boat outboard motor at the 1/6 mile, 45 degree Nutley, New Jersey bicycle board track Velodrome in the late in 1930s. [1] [2] Hinnershitz's passed his Indianapolis Motor Speedway test in 1939 but didn't qualify for the race. [3] He won the first feature at Williams Grove Speedway, a AAA Sprint car race. [4]

In the 1950s, he became one of the first drivers to have a car sponsor. [1] He carried the Miracle Power fuel additive sponsorship while racing with an Offenhauser race engine. [1]

Retirement and life after racing

Hinnershitz retired from racing in 1960 three hours after witnessing his friend Johnny Thomson die at a Allentown Fairgrounds race in Pennsylvania. [1] "I had been thinking about retiring for several weeks," Hinnershitz was quoted. "But I won't say what happened to John didn't help me make it definite. I quit for two reasons. One, I didn't approve of some of the new drivers and their driving philosophies. Two, my hands were gone. I simply couldn't grip the wheel well enough." [1] He held 39 track records at his retirement. [3] A. J. Foyt was quoted in his biography A.J.: "Of all the drivers on dirt Tommy Hinnershitz stands out in my mind as the best. Man, he had that sprint car up on two wheels, one wheel up on its side, whatever it took. And he almost never turned it over." [3]

Hinnershitz continued to work in the racing field for several more years as an Indy car mechanic. [1] He died on August 1, 1999. [5]

Williams Grove Speedway hosts a "Tommy Hinnershitz Classic" is an All Star Circuit of Champions sprint car race as of 2019. [6]

Sprint cars are high-powered race cars designed primarily for the purpose of running on short oval or circular dirt or paved tracks. Sprint car racing is popular primarily in the United States of America and Canada, as well as Australia, New Zealand, and South Africa. 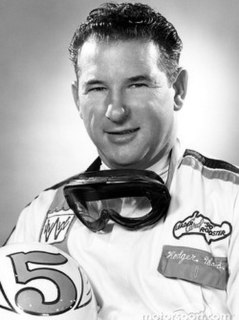 John A. Thomson was an American racecar driver. Thomson was nicknamed "the Flying Scot." He won several championships in midgets and sprint cars before competing in Championship Car racing. He won the pole position for the 1959 Indianapolis 500.

James Ernest Bryan was an American racecar driver who won the 1958 Indianapolis 500. Born in Phoenix, Arizona, Bryan died as a result of injuries sustained in a champ car race at Langhorne Speedway.

Thomas "Tommy" Milton was an American race car driver best known as the first two-time winner of the Indianapolis 500. He was notable for having only one functional eye, a disability that would have disqualified him from competing in modern motorsports. 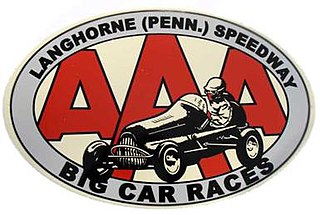 Langhorne Speedway was an automobile racetrack in Middletown Township, Bucks County, near the borough of Langhorne, Pennsylvania, a northern suburb of Philadelphia.

Joshua "J.C./Aggie" Agajanian was an influential figure in American motorsports history. He was a promoter and race car owner.

Williams Grove Speedway is a half-mile automobile dirt racing track located in Mechanicsburg, Pennsylvania, USA. The speedway opened on May 21, 1939, and has hosted many of the most notable national touring series and some of those most prestigious races in the country. The speedway is entering its 77th year of operation, with racing every Friday from March to October and other special events. One of these special events is the $56,000 to win National Open for sprint cars sanctioned by the World of Outlaws racing series held in October.

Reading Fairgrounds Speedway (1924–1979) was a one half mile dirt/clay modified race track located in Muhlenburg Township, Berks County, Pennsylvania. The track opened September 24, 1924 and ran until June 29, 1979. It featured a regular weekly series of modified, sportsman modified, and late model stock car racing. Today where the racetrack once stood is the Fairgrounds Square Mall, which opened in 1980 and closed in 2018.

Doug Wolfgang is a retired American racing driver. He holds 140 World of Outlaws sprint car series wins, 37 All Star Circuit of Champions wins, and is a five-time Knoxville Nationals champion and two-time Kings Royal winner. He finished second in the Outlaws standings four times and had four seasons with over ten wins.