Thomas Telford Irvin [1] (July 14, 1929 – September 14, 2017) served as Georgia's Commissioner of Agriculture from 1969 until January 2011. Irvin holds a record as the longest-serving Commissioner of Agriculture in the United States, and the longest-serving statewide official in Georgia. [2] He was also one of the last Democrats to win statewide in Georgia until 2020, when Joe Biden won the presidential election.

Irvin was born on July 14, 1929. [3] A Hall County, Georgia native, Irvin was elected to his first public office as a member of the Habersham County Board of Education in 1956. [2] A Democrat, Irvin was elected to four terms in the Georgia General Assembly as a Representative from Habersham County, where he served on the House Agriculture, Education, and Appropriations Committees and chaired the House Industrial Relations Committee and the Governor's Conference on Education. [2] During this period he sponsored legislation to allow public funding of school lunch programs. [4] [5] He was the Governor's Floor Leader and later served as Executive Secretary to the Governor. [2]

In 2000, Irvin made his first trip to Cuba, representing Georgia agriculture in support of free trade with the country. [6]

He was elected to his 10th and final four-year term in November 2006. [2] Rather than run for another term he retired, citing his age and Parkinson's disease as reasons for the decision. [7]

Irvin's final term was not without controversy. Both Irvin and the Department of Agriculture were sued for permitting the inhumane killing of dogs and cats. In 1990, Georgia's "Humane Euthanasia Act" became one of the first laws in the nation to mandate intravenous injection of sodium pentobarbital as the prescribed method for euthanizing cats and dogs in Georgia animal shelters. Prior to that time, gas chambers and other means were commonly employed. Irvin's department was tasked with licensing the shelters and enforcing the new law, through the Department's Animal Protection Division. However, Commissioner Irvin insisted the issue was a local one, and did not abide by the terms of the law. [8] [9] In March 2007, the Georgia Department of Agriculture and Commissioner Irvin were sued by former State Representative Chesley V. Morton, who had sponsored the law. [10] The Fulton County Superior Court ruled in favor of the Plaintiffs, validating the terms of the Humane Euthanasia Act, and issued a permanent injunction prohibiting the Department from issuing licenses to shelters using gas chambers, with exceptions being made for those established before the act and those in counties with less than 25,000 residents. [11] [12] After the Court decision, and issuance of the permanent injunction, Irvin continued to voice resistance to the ruling. In an interview with a south Georgia newspaper, Irvin suggested possible ways to circumvent the law, including the use of private contractors to operate gas chambers. [13] When the Department continued to license a gas chamber in Cobb County, Georgia, in violation of the court order, a second action was brought, which resulted in the Department being held in contempt. [14] The cases received widespread coverage in the media, casting Irvin in an unfavorable light.

Irvin grew up the child of poor sharecroppers. When his father died, Irvin quit school to take care of his mother and sisters, running the business for several years until he got into local politics. [5]

Irvin was inducted into the 4-H Hall of Fame in 2007, and he and his wife funded scholarships for youth. [15]

He was a trustee at several schools, including Piedmont College and Truett-McConnell College. [4] Irvin also served as school board chairman and president of the Georgia School Boards Association. [2] He died at his home in Mount Airy, Georgia on September 14, 2017 at the age of 88. [16] [17] 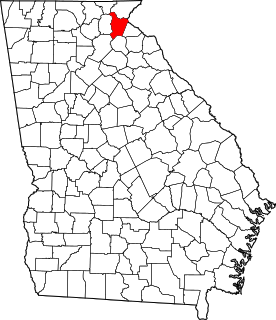 Habersham County is a county located in the northeastern part of the U.S. state of Georgia. As of the 2010 census, the population was 43,041. The county seat is Clarkesville. The county was created on December 15, 1817, and named for Colonel Joseph Habersham of the Continental Army in the Revolutionary War. 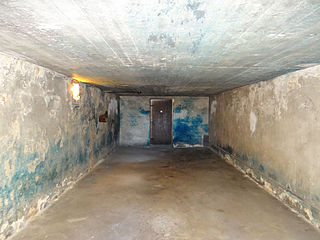 A gas chamber is an apparatus for killing humans or other animals with gas, consisting of a sealed chamber into which a poisonous or asphyxiant gas is introduced. Poisonous agents used include hydrogen cyanide, carbon dioxide and carbon monoxide.

An animal shelter or pound is a place where stray, lost, abandoned or surrendered animals – mostly dogs and cats – are housed. The word "pound" has its origins in the animal pounds of agricultural communities, where stray livestock would be penned or impounded until they were claimed by their owners. 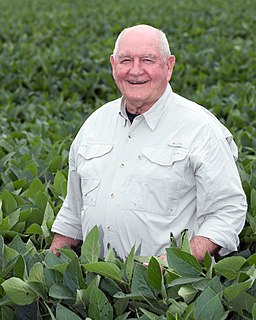 George Ervin "Sonny" Perdue III is an American veterinarian, businessman and politician serving as the 31st and current United States Secretary of Agriculture since 2017. He previously served as the 81st Governor of Georgia from 2003 to 2011; Perdue was the first Republican to hold the office since the Reconstruction era.

Animal euthanasia is the act of putting an animal to death or allowing it to die by withholding extreme medical measures. Reasons for euthanasia include incurable conditions or diseases, lack of resources to continue supporting the animal, or laboratory test procedures. Euthanasia methods are designed to cause minimal pain and distress. Euthanasia is distinct from animal slaughter and pest control although in some cases the procedure is the same.

James Glenn Richardson is the former Speaker of the Georgia House of Representatives, in the state of Georgia.

Thurbert Earl Baker was the first African American Attorney General of the U.S. state of Georgia. He was appointed to the position in 1997 by Governor Zell Miller and served until January 10, 2011.

The Georgia State Patrol (GSP) was established in March 1937 in the U.S. state of Georgia and is a division of the Georgia Department of Public Safety. GSP troopers investigate traffic crashes and enforce traffic and criminal laws on the state's roads.

Terry Coleman is an American politician from the state of Georgia.

The Hayden Act, introduced by California Senator Tom Hayden as Senate Bill 1785 on February 18, 1998, amended California Law as it applies to companion animals.

Miracle Dog: How Quentin Survived the Gas Chamber to Speak for Animals on Death Row is a non-fiction book written by Randy Grim. Published in February 2005 by Blue Ribbon Books, the book details the story of a dog named Quentin, who survived fifteen minutes in a carbon monoxide gas chamber at the St. Louis, Missouri animal shelter in 2003. Grim, the president and founder of Stray Rescue of St. Louis, adopted the dog and used his story to campaign against the use of the gas chamber for Animal euthanasia and to support no-kill animal shelters. As a result of Grim's efforts, the St. Louis animal shelter stopped using the gas chamber in January 2005, switching to more humane euthanasia methods.

David B. Poythress was a Georgia politician, born in Bibb County, Georgia. He served terms as Secretary of State and Commissioner of Labor of the state of Georgia. Poythress also served as the Adjutant General of the Georgia National Guard from 1999 until 2007, initially appointed by Governor Roy Barnes and subsequently reappointed by Governor Sonny Perdue. He retired as a Lieutenant General.

Gary Black is the Agriculture Commissioner of the state of Georgia. A Republican, Black was elected in the November 2010 elections. Black defeated his Democratic opponent with 56% of the vote compared to 40.4%. Black succeeded the nation's longest serving Commissioner of Agriculture, Tommy Irvin (D), who had held the office since 1969 and did not seek re- election. Gary Black is married to Lydia Black and they have two children.

Chesley V. Morton is an American stockbroker, securities arbitrator, and former member of the Georgia House of Representatives.

Rogers State Prison is a Georgia Department of Corrections state medium-security prison for men located in Reidsville, Tattnall County, Georgia. Currently, the operational capacity of the facility is 1391 inmates and its warden is Brian Chambers.