Competition mode gives players three chances to successfully complete the challenges. Otherwise, players get the "game over" screen advising them to try again. The freestyle mode plays like a video arcade racing game, the training mode allows players to use any course, and the competition mode is like the Winter Olympic Games. Controls can be modified and players can either use skis or snowboards. The game is named after US alpine skier Tommy Moe and is co-endorsed with Val-d'Isère, which hosted the men's downhill skiing event during the 1992 Winter Olympics in Albertville, France. [4] The Japanese version of the game also features as endorsement from Italian ski equipment company Nordica, evident on the game's box.

Conditions can change on the course, including dawn, dusk, darkness, and afternoon conditions, and even forcing players to navigate through a winter storm. Once players reach the bottom of the hill in freestyle mode, they must use the ski lift in order to climb to the top of the next mountain. There are less than 70 seconds to get to the next checkpoint. The fastest speed that snowboards can go is 66 miles per hour (106.2 kilometres per hour) on hilly terrain and 88 miles per hour (141.6 kilometres per hour) on flat terrain.

A password allows players to continue their saved progress as they explore new regions of the mountain and refine their skiing or snowboarding skills.

GamePro assigned the game a rating of 4 out of 5 in their February 1994 issue. Game Players gave it a score of 77%. This game was voted the "best simulation game of 1994" in GameFan magazine's annual Megawards.

Snowboarding is a recreational and competitive activity that involves descending a snow-covered slope while standing on a snowboard attached to a rider's feet. It features in the Winter Olympic Games and Winter Paralympic Games.

Cypress Mountain is a ski area in West Vancouver, British Columbia, Canada, located in the southern section of Cypress Provincial Park, operated under a BC Parks Park Use Permit. 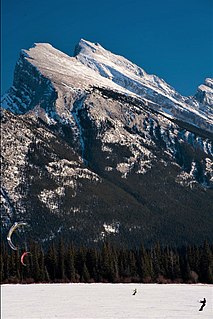 Snowkiting or kite skiing is an outdoor winter sport where people use kite power to glide on snow or ice. The skier uses a kite to give them power over large jumps. The sport is similar to water-based kiteboarding, but with the footwear used in snowboarding or skiing. The principles of using the kite are the same, but in different terrain. In the early days of snowkiting, foil kites were the most common type; nowadays many kiteboarders use inflatable kites. However, since 2013, newly developed racing foil kites seem to dominate speed races and expedition races, like Red Bull Ragnarok and the Vake mini-expedition race. Snowkiting differs from other alpine sports in that it is possible for the snowkiter to travel uphill and downhill with any wind direction. Like kiteboarding, snowkiting can be very hazardous and should be learned and practiced with care. Snowkiting is becoming increasingly popular in places often associated with skiing and snowboarding, such as Russia, Canada, Iceland, France, Switzerland, Austria, Norway, Sweden and the Northern and Central United States. The sport is becoming more diverse as adventurers use kites to travel great distances and sports enthusiasts push the boundaries of freestyle, big air, speed and back country exploration.

Freeriding is a style of snowboarding or skiing performed on natural, un-groomed terrain, without a set course, goals or rules. It evolved throughout the sport's formative early years as a contrary response to the highly regimented style of ski competition prevalent at the time. Snowboarders primarily refer to freeriding as backcountry, sidecountry, or off-piste snowboarding, and sometimes big mountain or extreme riding. 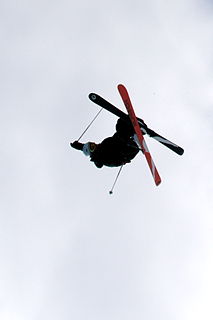 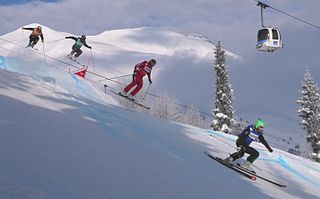 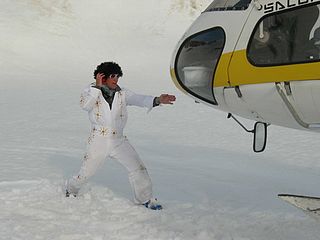 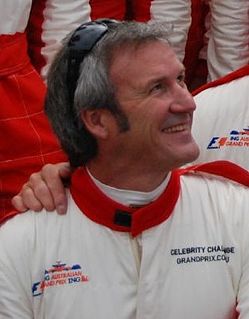 Skiing in Australia takes place in the high country of the states of New South Wales, Victoria and Tasmania, as well as in the Australian Capital Territory, during the southern hemisphere winter. 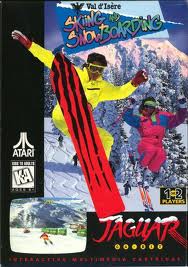 Val d'Isère Skiing and Snowboarding is a skiing and snowboarding video game developed by Virtual Studio and published by Atari Corporation for the Atari Jaguar first in North America on December 9, 1994. It was later released in Europe on January 1995 and finally in Japan on July of the same year, where it was published by Messe Sansao. It is a conversion of the SNES title Tommy Moe's Winter Extreme: Skiing & Snowboarding, which was done by the same team at Loriciels and released in 1994 on all regions. 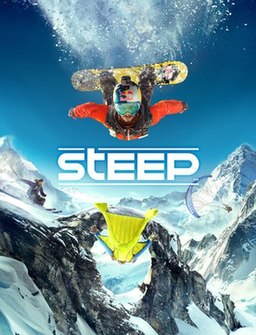 Steep is an extreme sports video game developed by Ubisoft Annecy and published by Ubisoft. It was released worldwide on December 2, 2016 for Microsoft Windows, PlayStation 4 and Xbox One.