Nelson is one of many ballplayers who only appeared in the major leagues during World War II. He made his major league debut on April 17, 1945 (Opening Day) against the New York Giants at Braves Field. In 40 games he hit .165 (20-for-121) with 6 runs batted in and 6 runs scored, and his fielding percentage in 114 total chances was .904. 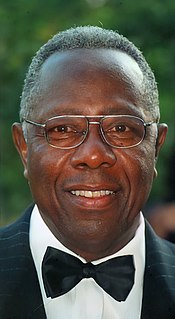 Henry Louis Aaron, nicknamed "Hammer" or "Hammerin' Hank," is an American retired Major League Baseball (MLB) right fielder who serves as the senior vice president of the Atlanta Braves. He played 21 seasons for the Milwaukee/Atlanta Braves in the National League (NL) and two seasons for the Milwaukee Brewers in the American League (AL), from 1954 through 1976. Aaron held the MLB record for career home runs for 33 years, and he still holds several MLB offensive records. He hit 24 or more home runs every year from 1955 through 1973, and is one of only two players to hit 30 or more home runs in a season at least fifteen times. In 1999, The Sporting News ranked Aaron fifth on its "100 Greatest Baseball Players" list.

Darrell Wayne Evans is a former American baseball player, coach and manager. He played 21 seasons in Major League Baseball (MLB), beginning his career as a third baseman with the Atlanta Braves, alternating between first and third base with the San Francisco Giants (1976–1983), and playing much of his later career as a first baseman and then a designated hitter for the Detroit Tigers (1984–1988). He won a World Series championship with the Tigers in 1984. Evans had most of his success in the early and late stages of his career. He was a two-time All-Star, first with the Braves in 1973 and then with the Giants in 1983. He led MLB in home runs in 1985 with the Tigers, and walks in 1973 and 1974 with the Braves.

John David Milner was an American first baseman and left fielder in Major League Baseball. A native of Atlanta, Georgia, he grew up a huge Hank Aaron fan, even appropriating his idol's nickname, "The Hammer." He was a member of the 1979 "We Are Family" Pittsburgh Pirates team that won the World Series against the Baltimore Orioles. 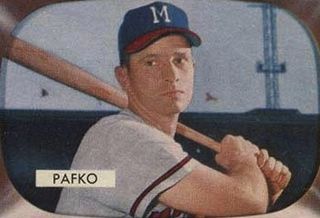 Andrew Pafko was an American professional baseball player. He played in Major League Baseball (MLB) for the Chicago Cubs (1943–51), Brooklyn Dodgers (1951–52), and Milwaukee Braves (1953–59). He batted and threw right-handed and played center field. 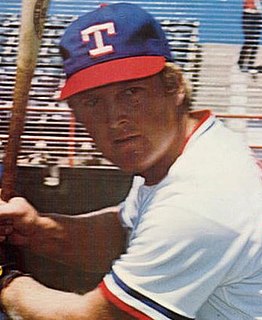 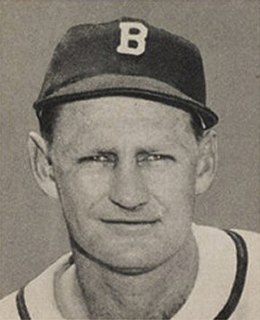 Robert Irving Elliott was an American third baseman and right fielder in Major League Baseball who played most of his career with the Pittsburgh Pirates and Boston Braves. He also briefly managed and coached in the Majors. Born in San Francisco, California, the right-handed batting and throwing Elliott stood 6 feet (1.8 m) tall and weighed 185 pounds (84 kg). 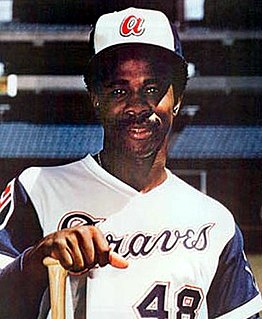 Ralph Allen Garr is a former Major League Baseball outfielder. Garr was a free swinger who could confound defenses by hitting to all parts of the outfield. Garr batted .300 or better five times during his career. 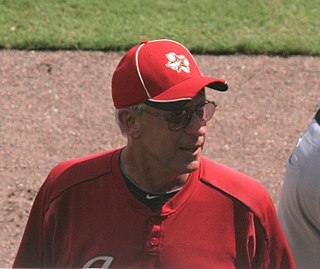 Philip Samuel Masi was an American professional baseball player. From 1939 though 1952, he played in Major League Baseball as a catcher for the Boston Braves (1939–1949), Pittsburgh Pirates (1949) and Chicago White Sox (1950–1952). Although he was known for being one of the best defensive catchers of his era, Masi was notable for his involvement in a controversial play that occurred during the 1948 World Series between the Boston Braves and the Cleveland Indians. 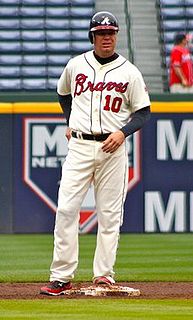 Larry Wayne "Chipper" Jones Jr. is an American former Major League Baseball (MLB) player and current broadcast analyst. Jones was the Atlanta Braves' number one overall pick in the 1990 MLB draft and their primary third baseman from 1995 to 2012. He was also a member of their 1995 World Series championship that beat the Cleveland Indians. An eight-time All-Star, Jones won the 1999 National League (NL) Most Valuable Player Award and the 1999 and 2000 NL Silver Slugger Award for third basemen. He was the MLB batting champion in 2008 after hitting .364. 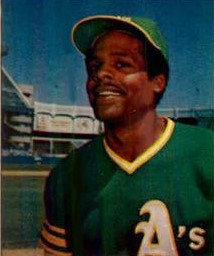 Earl Edward Williams, Jr. was an American Major League Baseball player. Though he never played catcher in the minor leagues, he earned the National League's Rookie of the Year award at that position in 1971.

Joseph John Mack was a Major League Baseball first baseman who played for the Boston Braves in 1945. The 33-year-old rookie was a native of Chicago.

Donald Raymond Fisher was a Major League Baseball pitcher who appeared in two games for the New York Giants in 1945. The 29-year-old rookie was a native of Cleveland, Ohio.

Charles Richard Mead was a professional outfielder who played for the New York Giants of Major League Baseball (MLB) from 1943 to 1945. He stood 6'1½" and weighed 185 lbs. He was born in Vermilion, Alberta, Canada.

The 1995 Major League Baseball season was the first season to be played under the expanded postseason format, as the League Division Series (LDS) was played in both the American and National leagues for the first time. However, due to the 1994–95 Major League Baseball strike which carried into the 1995 season, a shortened 144-game schedule commenced on April 25, when the Florida Marlins played host to the Los Angeles Dodgers.

James Edward Beauchamp was a Major League Baseball first baseman and outfielder who played from 1963 to 1973 for the St. Louis Cardinals, Houston Colt .45s/Astros, Milwaukee/Atlanta Braves, Cincinnati Reds, and New York Mets. He attended Grove High School in Grove, Oklahoma and Oklahoma State University before being signed by the Cardinals in 1957. He was the father of former minor league baseball player Kash Beauchamp. He was 6'2' and weighed 205 pounds.

The 1974 Atlanta Braves season was the ninth season in Atlanta along with the 104th season as a franchise overall. The team finished third in the National League West with a record of 88–74, 14 games behind the Los Angeles Dodgers. During the season, Braves outfielder Hank Aaron became the all-time career leader in home runs, surpassing Babe Ruth. Ralph Garr was the league's batting champion with a .353 average. Pitcher Buzz Capra captured the ERA title (2.28) and Phil Niekro tied for the league lead in wins with 20.