Tommy Newberry (Americas Success Coach) is the author of seven books—including the New York Times bestseller, The 4:8 Principle, and the motivational classic, Success is Not an Accident—both of which have been translated into dozens of languages. [1] [2]

He is the president of The 1% Club, which was developed to assist entrepreneurs and their families in business leadership. [3]

The 4:8 Principle is a Wall Street Journal and New York Times bestseller.

In addition to The 4:8 Principle, Newberry has authored Success is Not an Accident, 366 Days of Wisdom, Inspiration, and The War on Success. [4] [5] Tommy Newberry frequently speaks at schools, churches, business conferences, and has appeared as a guest on over 200 radio and television programs, including Good News, Living the Life, Fox & Friends, The Lou Dobbs Show, Your World With Neil Cavuto, Janet Parshall’s America, The Fox News Strategy Room, Everyday with Lisa & Marcus and many others.

He is also the founder of The Couples Planning Retreat, a luxury marriage retreat which helps couples take their marriages from good to great. 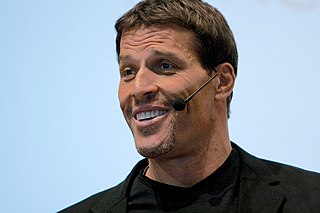 Anthony Jay Robbins is an American author, coach, motivational speaker, and philanthropist. Robbins is known for his infomercials, seminars, and self-help books including the books Unlimited Power and Awaken the Giant Within. His seminars are organized through Robbins Research International.

Robert J. Ringer is an American entrepreneur, motivational and political speaker, and author of several best-selling personal-development and political books.

Suzy Welch is an American author, television commentator, business journalist, and public speaker. Her 2009 book, 10-10-10: A Life Transforming Idea, was a New York Times bestseller. She is also the co-author, with her late husband Jack Welch, of two international New York Times and Wall Street Journal best-selling business books, Winning, published in 2005, and The Real Life MBA, published in 2015.

Louise Lynn Hay was an American motivational author and the founder of Hay House. She authored several New Thought self-help books, including the 1984 book You Can Heal Your Life.

In the New Thought philosophy, the Law of Attraction is the belief that positive or negative thoughts bring positive or negative experiences into a person's life. The belief is based on the ideas that people and their thoughts are made from "pure energy", and that a process of like energy attracting like energy exists through which a person can improve their health, wealth, and personal relationships. There is no empirical scientific evidence supporting the law of attraction, and it is widely considered a pseudoscience.

Larry Winget is a professional motivational speaker, bestselling author, television personality and social commentator. Winget markets himself as "the trademarked 'Pitbull of Personal Development' and 'World's Only Irritational Speaker'". 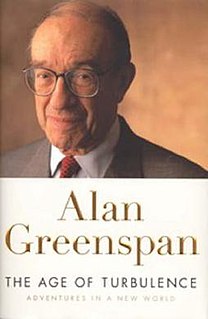 The Age of Turbulence: Adventures in a New World is a 2007 memoir of former Chairman of the Federal Reserve Alan Greenspan, co-authored by Peter Petre, a former executive editor at Fortune magazine. Published on September 17, 2007, the book debuted at the top of the New York Times Bestseller list for hardcover nonfiction. Penguin Press reportedly paid him an $8 million advance.

David L. Bach is an American financial author, television personality, motivational speaker, entrepreneur and founder of FinishRich.com. Bach, is best known for his Finish Rich Book Series and Automatic Millionaire Series of motivational financial books under the Finish Rich Brand. He has written 12 books since 1998 with over seven million copies in print. Eleven of Bach's books have been national bestsellers, including nine consecutive New York Times bestsellers, two of which were consecutive #1 New York Times bestsellers. Bach has had four of his books Smart Women Finish Rich, Smart Couples Finish Rich, The Automatic Millionaire and The Finish Rich Workbook appear simultaneously on the Wall Street Journal, BusinessWeek, and USA Today bestseller lists. Eleven of Bach's books have been published from Random House. Bach's first book Smart Women Finish Rich was published in 1998, and appeared on the bestseller lists for a decade. His most recent book Debt Free For Life (2011) was published by Crown Business Books, and appeared simultaneously on the New York Times, Wall Street Journal and USA Today bestseller lists.

Waldo Waldman is an American author, motivational speaker and leadership consultant, and founder of The Wingman Foundation. He is a decorated fighter pilot and retired Air Force Lt. Col. and combat veteran, having flown 65 combat missions. He is the author of Never Fly Solo, a New York Times and Wall Street Journal bestseller. He has won multiple awards during his military and speaking career, including being inducted into the Speaker Hall of Fame by the National Speakers Association.

Brendon Burchard is a #1 New York Times best-selling author and "the world's leading high performance coach". His latest book, High Performance Habits, was a The Wall Street Journal best-seller and named by Amazon as one of its top three best business and leadership books of 2017. Burchard was on the cover of SUCCESS Magazine in October 2017 where the article named him the world's highest-paid motivation and marketing trainer. He has several online personal development courses with the Oprah Winfrey Network, and according to Forbes he has trained over 1.5 million students in his online courses. O, The Oprah Magazine, named him "one of the most influential leaders in the field of personal growth." His podcast is called The Brendon Show.

DeVon Franklin is an American Hollywood producer, best-selling author and motivational speaker. He is best known for the films Miracles from Heaven, Heaven Is for Real, and the New York Times best-seller book The Wait, which he co-wrote with his wife Meagan Good.

ResultSource is a San Diego-based book marketing company that conducts "bestseller campaigns" on behalf of authors. The company states "'We create campaigns that reach a specific goal, like: "On the bestsellers list," or "100,000 copies sold.'" For example, for a negotiated fee ResultSource will guarantee that a book becomes a bestseller. It does this through bulk book buying programs designed to manipulate the metrics used by Nielsen BookScan and the New York Times Best Seller list, among other strategies. As a result of ResultSource's business practices, Amazon.com has stopped doing business with the company. The company was founded by Kevin Small.

Roger Connors is an American management consultant and author. 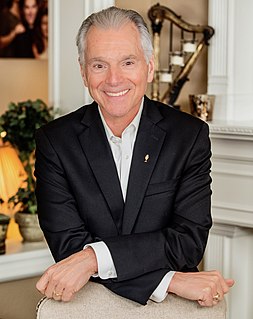 Jim Cathcart is an American entrepreneur, speaker and author.

Emily Jane Fox is an American reporter for Vanity Fair online magazine The Hive and author of the 2018 book Born Trump: Inside America's First Family.

Jen Sincero is an American writer, speaker and success coach.