Thomas James Montgomery Priestley (11 March 1911 – 28 July 1985) was a Northern Irish footballer who played at both professional and international levels as a striker.

Priestley began his senior career with Coleraine in 1928, after moving there from Cookstown. Priestley moved to Linfield in 1932, before signing with English side Chelsea just a year later. Priestley only spent one season with Chelsea - making 23 appearances in The Football League - before returning to Ireland with Shelbourne.

Priestley earned two caps for Ireland between 1932 and 1933.

Chelsea Football Club is an English professional football club based in Fulham, West London. Founded in 1905, the club competes in the Premier League, the top division of English football. Chelsea are among England's most successful clubs, having won over thirty competitive honours, including six league titles and eight European trophies. Their home ground is Stamford Bridge. 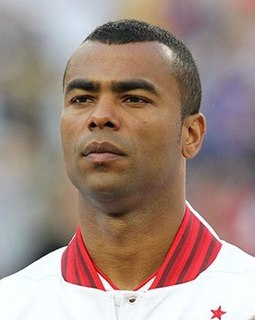 Ashley Cole is an English former footballer who played as a left-back, most notably for Premier League clubs Chelsea and Arsenal and is currently a first-team coach at Everton. Cole is considered by many critics and fellow professional players as one of the best defenders of his generation, and by some, for the better part of his career, as the best left-back in the world. Born in Stepney, London, Cole began his youth career at Arsenal and made his full debut for the club in November 1999, going on to make 228 appearances and scoring nine goals for the North London club. With Arsenal he won two Premier League titles, three FA Cups, and was an integral member of the "Invincibles" team of the 2003–04 season, who went the entire league season undefeated. Cole also made an appearance in Arsenal's first UEFA Champions League final in 2006; the club lost 2–1 to Barcelona.

Damien Anthony Duff is an Irish professional football coach and former player who played predominantly as a winger and current manager of Shelbourne.

Geremi Sorele Njitap Fotso, known simply as Geremi, is a Cameroonian former footballer. He was a versatile player able to play at right back, right midfield or defensive midfielder, known for his power, combative style and free-kick ability.

Samuel English was a Northern Irish footballer who played for several clubs during the 1930s, but is mainly remembered for his time with Rangers. English also won two international caps for Ireland.

Frank Richard George Lampard is an English former professional footballer who played as a left-back. He played most of his career for West Ham United, had a brief spell with Southend United, and was capped twice for the England national team. He is the father of former Chelsea midfielder and manager, Frank Lampard, and is often referred to as "Frank Lampard Senior" or "Frank Senior" when there is a chance of confusion between the two. 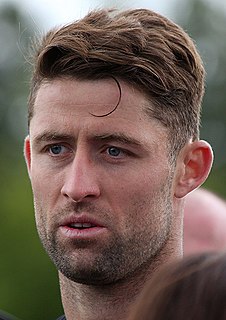 Gary James Cahill is an English professional footballer who plays as a centre-back for EFL Championship club AFC Bournemouth.

David Calderhead was a Scottish football player and manager. Calderhead played for Queen of the South Wanderers, Notts County and Lincoln City. He won the FA Cup with Notts County in 1894 and was capped once for Scotland, in 1889. He then became a manager, working for Lincoln City (1900–1907) and Chelsea (1907–1933). 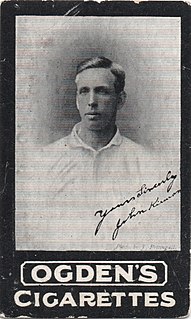 Alexander Skinner Jackson was a Scottish footballer who played for clubs including Dumbarton, Bethlehem Steel, Aberdeeen, Huddersfield Town, Chelsea and Nice; he won the English Football League title with Huddersfield in 1925–26. Jackson received 17 international caps for Scotland over a five-year period, and was a member of the 1928 team that became known as the 'Wembley Wizards' after defeating England 5–1 in London, scoring three of those goals.

Samuel Johnstone Irving was an Irish professional footballer and manager. Born In Ireland, he was raised in Scotland before playing football in the North of England. He turned professional in 1913 and played in the Football League for Bristol City before World War I. After the war he returned to non-league in England.

Priestley may refer to: Robert McAuley was an footballer who played as a fullback. He played professionally in Canada, England, Scotland, Ireland and the United States in addition to earning two caps with the Scottish national team in 1931.

Hayley Rose Bowden is a women's association footballer who has represented New Zealand at international level.

Árpád Weisz was a Hungarian Olympic football player and manager. Weisz was Jewish, and was murdered with his wife and children by the Nazis during the Holocaust in World War II at Auschwitz.

Niamh Fahey is an Irish footballer who plays as a defender or midfielder for FA Women's Championship team Liverpool and the Republic of Ireland women's national football team. She has previously played for Chelsea. Before joining Chelsea in December 2014, Fahey spent six seasons with Arsenal Ladies. She has also won national cups playing Gaelic football with Galway Ladies Football. Niamh is the sister of Galway's 2001 All-Ireland-winning Gaelic football captain Gary Fahey.

Joshua Mark McEachran is an English professional footballer who plays as a midfielder for EFL League One club Milton Keynes Dons.