Thomas Joseph Thevenow (September 6, 1903 – July 29, 1957) was an American professional baseball shortstop. He played in Major League Baseball (MLB) from 1924 to 1938 for the St. Louis Cardinals, Philadelphia Phillies, Pittsburgh Pirates, Cincinnati Reds, and Boston Bees. Thevenow epitomized the good-fielding / weak-hitting shortstops that prevailed in the era, ending his career with a fielding percentage of .947, but a batting average of .247 while hitting only two home runs in his 15-year career. He hit two home runs in 1926, both inside-the-park home runs, and then never hit another home run in his next 12 seasons, setting a major league record of 3,347 consecutive at bats without a home run. [1] [2]

Thevenow was acquired by the Cardinals on September 3, 1924, when he was purchased from the Syracuse Stars of the Class AA International League, where he played 140 games that season. [3] [4] He played 23 games for the Cardinals that season, debuting on September 4 and finishing the season with a batting average of .202. He played 50 games with St. Louis in 1925, concluding the season with a .269 average, in addition to 112 games played for Syracuse. [3] [4]

During the 1926 season, Thevenow hit the first home run of his major league career on September 17 off Cincinnati Reds pitcher Jack Knight, an inside-the-park homer that was part of 10–1 win over fading Cincinnati; the Reds went on to lose seven of their last nine games down the stretch. Five days later, Thevenow would hit another inside-the-park home run, the second and final regular season home run of his career, as the Cardinals beat the Brooklyn Dodgers by a score of 15–7, putting the Cardinals 2½ games ahead of the Reds for first place in the National League. [5] Over the rest of the 1926 season and the next 12 years of his major league career, Thevenow would not hit another home run (his final 3,347 at-bats), the most consecutive at bats without a home run in major league history. [6] He finished the 1926 season with a .256 batting average and came in fourth in balloting for that season's National League Most Valuable Player, an award won by teammate Bob O'Farrell. [3]

The Cardinals won the NL pennant and faced the New York Yankees in the 1926 World Series. In the second game of the series, Thevenow hit a ball to right field off Yankee pitcher Sad Sam Jones which Babe Ruth could not corral as he ran towards the ball at full speed. Thevenow rounded the bases and scored ahead of Ruth's throw to the plate. The official scorer's ruling was an inside-the-park home run. Thevenow would go on to get 10 hits in 24 at-bats for a .417 batting average, leading the Cardinals to win the series in seven games. [6]

Thevenow's hitting dropped below the Mendoza Line in 1927, with an average of .194 in 59 games. He picked it up a bit in 1928, ending the season having played 69 games and finishing with a .205 batting average. Following the season, the Cardinals traded him to the Philadelphia Phillies in exchange for shortstop Heinie Sand and $10,000. [3]

Thevenow died at age 53 on July 29, 1957, due to a cerebral hemorrhage. He had operated a grocery store in his hometown of Madison, Indiana following his retirement from baseball. [2] 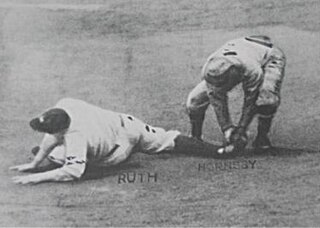 Jhonny Antonio Peralta is a Dominican former professional baseball shortstop and third baseman who played 15 seasons in Major League Baseball (MLB). The Cleveland Indians signed him as an amateur free agent in his native Dominican Republic in 1999, and he made his major league debut for the Indians on June 12, 2003. He subsequently played for the Detroit Tigers and St. Louis Cardinals. A solid hitter with power, Peralta has rated average defensively. He throws and bats right-handed, stands 6 feet 2 inches (1.88 m), and weighs 225 pounds (102 kg).

Jared Michael "Skip" Schumaker is an American former professional baseball second baseman and outfielder. He is the associate manager of the San Diego Padres of Major League Baseball (MLB). He played in MLB for the St. Louis Cardinals, Los Angeles Dodgers, and Cincinnati Reds. After the 2017 season, Schumaker became the San Diego Padres’ first base coach. 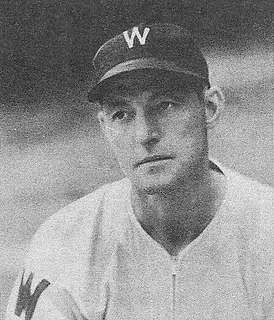 Charles Magnus Gelbert was a professional baseball player. He played all or part of ten seasons in Major League Baseball for the St. Louis Cardinals, Cincinnati Reds (1937), Detroit Tigers (1937), Washington Senators (1939–40) and Boston Red Sox (1940), primarily as a shortstop.

Henry George "Heinie" Schuble was an American baseball infielder. He played professional baseball for 11 years from 1926 to 1936, including seven seasons in Major League Baseball with the St. Louis Cardinals and Detroit Tigers (1929–1935). He appeared in 332 major league games and compiled a .251 batting average and .296 on-base percentage.

The 1926 St. Louis Cardinals season was the team's 45th season in St. Louis, Missouri and their 35th in the National League. The Cardinals went 89–65 during the season and finished first in the National League, winning their first National League pennant. In the World Series, they defeated the New York Yankees in 7 games, ending it by throwing out Babe Ruth at second base in the ninth-inning of Game 7 to preserve a 3–2 victory. This was Rogers Hornsby's only full season as manager for the team.

The 1937 Cincinnati Reds season was a season in American baseball. The team finished eighth and last in the National League with a record of 56–98, 40 games behind the New York Giants.

The 1936 Cincinnati Reds season was a season in American baseball. The team finished fifth in the National League with a record of 74–80, 18 games behind the New York Giants.

The following lists the events of the 1929 Philadelphia Phillies season.

The 1938 Boston Bees season was the 68th season of the franchise.

Clyde Eugene "Jersey" Beck was a right-handed infielder in Major League Baseball for the Chicago Cubs and Cincinnati Reds from 1926 to 1931.

Starlin DeJesus Castro is a Dominican professional baseball infielder for the Washington Nationals of Major League Baseball (MLB). He previously played for the Chicago Cubs, New York Yankees and Miami Marlins. Castro is a four-time MLB All-Star and holds the record for most runs batted in in an MLB debut. In 2011, he led the National League in hits, becoming the youngest player to do so. 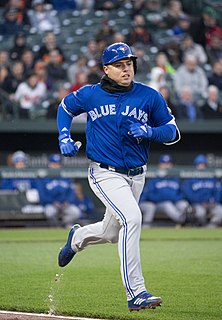 Aledmys Díaz Serrano is a Cuban professional baseball shortstop for the Houston Astros of Major League Baseball (MLB). He played for the Naranjas de Villa Clara in the Cuban National Series from 2007 through 2012, before defecting to the United States. Díaz signed with the St. Louis Cardinals in 2014, and made his MLB debut with them in 2016. He has also played for the Toronto Blue Jays.

Greg Joseph Garcia is an American professional baseball infielder for the San Diego Padres of Major League Baseball (MLB). The St. Louis Cardinals selected him in the seventh round of the 2010 MLB draft from the University of Hawaii. He made his major league debut in 2014.