Thomas William Waterall (24 October 1884 – 8 November 1951) was an English footballer. He played as an outside left in the Football League [1] and Southern League.

Waterall started his working life as a miner, becoming a professional footballer for the first time in 1906. After spells in the Football League with Notts County, Bradford Park Avenue and Leicester Fosse, Waterall joined Southern League side Watford in July 1914. [2] He did not play any part in Watford's first five fixtures of the 1914–15 season, but was everpresent thereafter, and scored a hat-trick on his second appearance for the club, in a 3–0 away win against Millwall. Watford went on to win the Southern League that season. [3] After the resumption of peacetime football following the First World War, he spent two furthers seasons as a regular in the team. He was a part of the side that finished second in the Southern League on goal average in 1919–20, and the following season Waterall played in Watford's first ever Football League fixture, a 2–1 away win at Queens Park Rangers on 28 August 1920. [3] At the end of the 1920–21 season, Waterall joined Gillingham on a free transfer. [2]

Two of his brothers, Albert and Ike were professional footballers; both started their careers at Notts County. Albert later played for Stockport County and Ike for Millwall. [1]

Ron Gray is a former association football player, manager and scout. Born in North Shields, wing half Gray started his professional year in 1938 with Sheffield United, later moving to Lincoln City, Notts County and finally Watford, before retiring at the age of 26 due to injury. He started his managerial career at Watford, but his tenure was not particularly successful. The club recorded their lowest ever football league finish, having to apply for re-election to the Football League in 1950–51. His next managerial role was at Millwall. After his first spell as manager, Gray stayed at the club as assistant manager to Reg Smith. Gray was re-appointed as manager after Smith was sacked, and led the club to promotion as Fourth Division champions in 1961–62. Gray later spent four seasons at Lincoln City from 1966 to 1970, when he signed future Watford manager Graham Taylor as a player. After leaving Lincoln, Gray joined Ipswich Town as a scout, where he remained until his retirement in 1987. and discovered many of the 1978 FA Cup and 1981 UEFA Cup winning team's under the management of Bobby Robson.

George William Neville Edmonds was an English professional footballer. He played as a centre forward for St Albans City, Watford, Wolverhampton Wanderers (Wolves), Fulham and Northfleet United. On three occasions he finished as Watford's top scorer, including in 1914–15 when they won the Southern League. He later played in the 1921 FA Cup Final for Wolves.

Watford Football Club are an association football team from the county of Hertfordshire, England. The 1914–15 season was their nineteenth season of league football, since joining the Southern League as West Hertfordshire for the 1896–97 season. Watford finished the season as champions of the Southern League First Division, winning 22 and drawing 8 of their 38 league matches. In other competitions, Watford were eliminated from the FA Cup in the sixth qualifying round by Rochdale, and from the Southern Charity Cup by fellow Southern League team Luton Town. The club's manager was Harry Kent, and its top scorer George Edmonds, with 17 goals from 35 appearances. Other notable players included Skilly Williams, who began what would be a 13-year period as the club's first choice goalkeeper, and Fred Gregory, whose goal against Gillingham sealed the title for Watford. Gregory and Williams were also the only two men to play in all 40 of Watford's games.

Watford Football Club is an association football team from the county of Hertfordshire, England. The 1919–20 season was their twentieth season of league football, and their first since 1914–15 due to the outbreak of the First World War. It was also their final season in the Southern League, having originally joined it as West Hertfordshire for the 1896–97 season, prior to a merging with another club and renaming in 1898. Having started the season as reigning champions, Watford finished the season as runners up of the Southern League First Division on goal average. They won 26 and drew 6 of their 42 league matches, compared to eventual champions Portsmouth's record of 23 wins and 12 draws. Watford's only other competitive fixture was in the FA Cup, where they were eliminated in the 6th Qualifying round by fellow Southern League side Southend United. The club's manager was Harry Kent, and its top scorer was George Edmonds, with 19 goals from 37 appearances.

Peter Mann Ronald was an English association footballer. During his career he played for Hebburn Argyle, Watford, Nottingham Forest and West Stanley, primarily as an inside right. Following his retirement as a player, he coached Watford between 1926 and 1946.

Michael David Benning is an English former football player who played most notably for Watford in The Football League before dropping down to play in lower tiers of the English football league system, where he also managed for a spell.

Arthur Charles Betts was an English association footballer. He played as a left back in the Football League, most notably Derby County, as well as in the Southern League with Watford. In 1911–12, Betts won the Second Division with Derby.

Frederick James Gregory was an English footballer. He played for Watford, initially as an inside forward, and latterly as a half back and full back.

Valentine Francis Gregory was an English footballer who played as a half back. He won the 1914–15 Southern League title with for Watford, and captained Wolverhampton Wanderers in the 1921 FA Cup Final.

Watford Football Club is an English football team, based in Watford, Hertfordshire. 1977–78 was the club's first season under the management of Graham Taylor, and its last in the fourth tier of English football. Watford ended the season as champions of the Football League Fourth Division with 71 points, the club's highest Football League total under the system of two points for a win, and three points short of the all-time Football League record set by Graham Taylor's Lincoln City side in 1975–76. The season also marked new club records for the most league wins in a season (30), most home wins (18), most away wins (12), and most away goals scored (42). 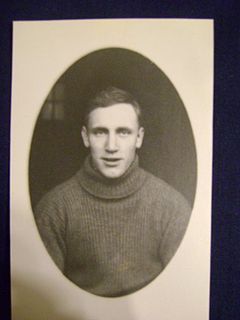 Thomas Charles "Tom" Walters was a Welsh professional footballer. He played as a centre forward in the Football League for Merthyr Town, Bolton Wanderers, Crystal Palace, Exeter City, Torquay United, Watford and Clapton Orient, as well as in the Southern League for Dartford.

Austin Leslie Farnen was an English professional footballer. After serving in the military during the Second World War, Farnen joined Football League Third Division South side Watford in April 1946. He played at centre half for every competitive fixture of the 1946–47 season, but then made 27 appearances in his second season, and was released after only eight appearances for Watford in 1948–49. Farnen went on to join Bradford City, making eight further appearances in the Football League. He then joined Gloucester City in the Southern Football League making 25 appearances.

William Lindsay was a professional footballer. He played in the Football League for English sides Everton, Grimsby Town and Newcastle United, as well as the Southern League for Luton Town and Watford, and captained the latter four clubs. During his first season at Watford, he was part of the team that won promotion as champions of the 1903–04 Southern League Second Division.