Thomas David Williams, known as Tommy Williams (born December 17, 1956), [1] is a Republican former member of the Texas Senate, who represented District 4 in The Woodlands in Montgomery County in the Houston suburbs.

Williams was first elected to the Texas Senate in 2002, after incumbent District 4 Senator David Bernsen, a Democrat, declined to seek re-election after redistricting changed the composition of the district. (Bernsen instead ran unsuccessfully for Texas Land Commissioner, losing that race to Jerry E. Patterson.) [2]

After more than ten years in office, Williams, the chairman of the Senate Finance Committee, was in October 2013 in the process of resigning, to accept a government relations position at his alma mater, Texas A&M University in College Station. On October 3, Williams confirmed that he would not run again in the Republican primary election scheduled for March 4, 2014. [3]

Williams previously served three terms from 1997 to 2003 in the Texas House of Representatives. Williams has served as president of Woodforest Financial Services, an affiliate of Woodforest National Bank. Williams started his new position at Texas A&M on December 2, 2013. [4]

Among those seeking to fill Williams' Senate seat were neighboring State Representatives Steve Toth of District 15 in The Woodlands and Brandon Creighton of District 16 in Conroe, both of Montgomery County. Creighton defeated Toth in a runoff election to claim the seat.

Robert Franklin Deuell, known as Bob Deuell is a physician from Greenville, Texas, who a former Republican member of the Texas Senate. He entered office in 2003 and represented the ten counties of Senate District 2 in the northeastern portion of the state. His term ended in 2015.

Kyle Janek, is an American physician and former Republican member of the Texas Senate, having represented District 17 from 2003 until June 2, 2008. The district includes portions of Harris, Brazoria, Fort Bend, Galveston, and Jefferson counties. Janek was not a candidate for renomination to the state Senate in the Republican primary held on March 4. 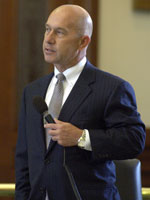 John Harris Whitmire is an American attorney and politician who is the longest-serving current member of the Texas State Senate. Since 1983, he has represented District 15, which includes much of northern Houston, Texas. His tenure earns him the title of Dean of the Senate. Previously he was a member of the Texas House of Representatives from 1973 through 1982. He also served as the Acting Governor of Texas in 1993 as part of the Governor for A Day tradition.

John Joseph Carona is a former Republican member of the Texas Senate from District 16 in Dallas County, Texas.

District 4 of the Texas Senate is a senatorial district that serves all of Liberty and Orange counties, and portions of Chambers, Harris, Jefferson and Montgomery counties in the southeastern portion of the state of Texas. The current Senator from District 4 is Brandon Creighton, the winner of a special election held on August 5, 2014, to succeed the resigning Tommy Williams.

District 1 of the Texas Senate is a senatorial district that serves all of Bowie, Camp, Cass, Franklin, Gregg, Harrison, Lamar, Marion, Morris, Panola, Red River, Rusk, Titus, Upshur, Wood and Smith county in the U.S. state of Texas. The current Senator from District 1 is Bryan Hughes.

District 22 of the Texas Senate is a senatorial district that currently serves all of Bosque, Ellis, Falls, Hill, Hood, Johnson, McLennan, Navarro, Somervell counties and portions of Tarrant county in the U.S. state of Texas.

District 26 of the Texas Senate is a senatorial district that currently serves a portion of Bexar county in the U.S. state of Texas.

Mario Valentin Gallegos Jr. was a Democratic politician in the U.S. state of Texas. He was the senator from District 6 in the Texas Senate, which serves a portion of Harris County. 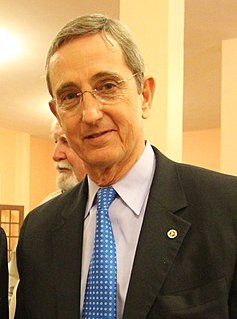 Jerry Emmett Patterson is the former Texas General Land Office of Texas and a former state senator. He was the second Republican since Reconstruction to serve as land commissioner, a post which he held from 2003 to 2015, serving three terms. He served from the Houston area in District 11 in the Texas Senate from 1993 to 1999.

Leticia R. San Miguel Van de Putte (born 6 December 1954) is an American politician from San Antonio, Texas. She represented the 26th District in the Texas Senate from 1999–2015. From 1991 to 1999, Van de Putte was a member of the Texas House of Representatives. In 2014, she was the Democratic nominee for lieutenant governor but lost the general election, 58-38 percent, to her Republican senatorial colleague, Dan Patrick of Houston. Following that defeat, she then resigned from the Texas Senate to run for mayor of San Antonio, which she narrowly lost to Ivy Taylor, 52-48 percent.

Earl Jeffrey Wentworth, is a Republican former member of the Texas Senate from San Antonio. He represented District 25 in the upper legislative chamber from January 1997 to January 2013. In addition, from 1993 to 1997, he represented District 26, having been initially elected to the state senate in 1992 to succeed fellow Republican Cyndi Taylor Krier, when she became the county judge of Bexar County. District 25 included northern portions of Bexar County, all of Comal, Guadalupe, Hays, and Kendall counties, and a part of southern Travis County.

Robert Lloyd Duncan is an American politician and the fourth chancellor of the Texas Tech University System, serving from 2014 to 2018. Duncan is a Republican, who has served in both houses of the Texas State Legislature.

Craig Linton Estes is a former Republican member of the Texas Senate for the 30th District. He served on the Health and Human Services, Nominations, and State Affairs Committees, and was the chairman of the Natural Resources & Economic Development Committee. He also served as the President Pro Tempore of the Texas Senate for the 83rd interim session.

Glenn Allen Hegar Jr. is an American attorney who serves as Texas Comptroller of Public Accounts. He was a Republican member of the Texas Senate representing the 18th District, west of Houston. He succeeded fellow Republican Susan Combs as comptroller on January 2, 2015. He was elected Comptroller in the general election on November 4, 2014.

Will Metcalf is an American investment banker from Conroe, Texas, and a Republican member of the Texas House of Representatives for District 16, based entirely in suburban Montgomery County, north of Houston in the southeastern portion of the state.