Tommy Windich (or Windiitj) was born around 1840 near Mount Stirling in Western Australia. [1] Little is known of his youth, but his skills in tracking and knowledge of a number of Aboriginal languages suggest a traditional upbringing, whereas his skills in horseriding and marksmanship indicate extensive contact with colonial culture.

By the early 1860s, Windich was working as a "native assistant" in the police force at York, where his main tasks were to assist in the tracking of escaped convicts, Aborigines who were wanted by the authorities, and escaped horses.

In 1863, he joined the first native policeman Cowits to accompany Henry Maxwell Lefroy on his expedition east of York to the interior.

In 1865 he tracked and helped to recapture a prison escapee named Joseph Johns, who would later become the notorious bushranger Moondyne Joe. Early in 1866 he helped to capture three Aborigines who had murdered a pastoralist, one of whom fought against his arrest, spearing Windich in the arm. This expedition appears to have made Windich's name as a superb tracker and a reliable and useful member of any travelling party, for he was afterwards in constant demand.

Sometime in 1866 Windich was stationed to Beverley, where he continued his usual work as a native assistant, but was also sent on a number of exploring expeditions. Windich's next exploratory expedition (also with Cowits) was the third expedition of the explorer Charles Hunt. The objective was to explore the area east of the Hampton Plains but an unseasonal drought caused a great shortage of water and feed for the horses, and they were forced to abandon their plans and return to York.

In 1869, Windich was a member of John Forrest's first expedition, which searched without success for clues to the fate of the long-lost explorer Ludwig Leichhardt in the desert west of the site of the present-day town of Leonora. The following year, he was a member of Forrest's second expedition, which surveyed Edward John Eyre's route between the colonies of Western Australia and South Australia along the coast of the Great Australian Bight. In 1871, Windich was part of another attempt to explore the land beyond the Hampton Plains, this time under the guidance of Alexander Forrest. This expedition discovered about 1,200 square kilometres (460 sq mi) of pastoral land, half of which was of fine quality, but also found water to be extremely scarce. In 1874, Windich was a member of John Forrest's third and most ambitious expedition. This expedition explored the watershed of the Murchison River, discovering much new pastoral land, then headed east through the uncharted centre of Western Australia, to the overland telegraph line from Darwin to Adelaide.

Early in 1876, Windich was working as a guide with the party constructing the overland telegraph line from Perth to Adelaide, when he caught a chill that became a serious illness. On about 20 February, he died of pneumonia. He was buried at Dempster Head near Esperance. John Forrest said at the time

"his name is almost a household word in this colony.... I feel that I have lost an old and well tried companion and friend."

In September 1988, a cultivar of barley, bred by the Western Australian Department of Agriculture for performance in medium to high rainfall areas, was released under the name "Hordeum vulgare (Barley) c.v. Windich". Commonly referred to simply as "Windich", the cultivar is named for Tommy Windich, continuing a tradition of naming Western Australian grain cultivars after historic people of Western Australia.

Sir John Forrest was an Australian explorer, the first Premier of Western Australia and a cabinet minister in Australia's first federal parliament.

Alexander Forrest CMG was an explorer and surveyor of Western Australia, and later also a member of parliament.

John McDouall Stuart, often referred to as simply "McDouall Stuart", was a Scottish explorer and one of the most accomplished of all Australia's inland explorers.

Edward John Eyre was an English land explorer of the Australian continent, colonial administrator, and a controversial Governor of Jamaica.

Frederick Kennedy Panter was a police officer, pastoralist and explorer in colonial Western Australia. While exploring in the Kimberley region of Western Australia in 1864, he was killed by Australian Aborigines.

The La Grange expedition was a search expedition carried out in the vicinity of Lagrange Bay in the Kimberley region of Western Australia in 1865. Led by Maitland Brown, the expedition searched for three settlers who had failed to return from an earlier exploring expedition. The three men were eventually found dead, having been speared and clubbed to death in their sleep by Indigenous Australians. A number of Indigenous people were subsequently killed by members of the expedition in a controversial incident that is often now referred to as the "La Grange Massacre", although the fairness of this term remains a matter of some debate. 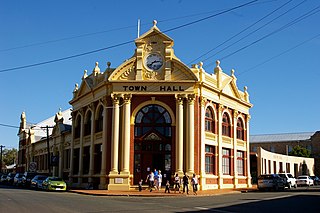 The Australian Overland Telegraph Line was a 3,200 km (2,000 mi) telegraph line that connected Darwin with Port Augusta in South Australia. Completed in 1872, the Overland Telegraph Line allowed fast communication between Australia and the rest of the world. An additional section was added in 1877 with the completion of the Western Australian section of the line. It was one of the great engineering feats of 19th-century Australia and probably the most significant milestone in the history of telegraphy in Australia.

Charles Cooke Hunt was an English explorer who led four expeditions into the interior of Western Australia between 1864 and 1866.

The Forrest River massacre, or Oombulgurri massacre of June 1926, was a massacre of Indigenous Australian people by a group of law enforcement personnel and civilians in the wake of the killing of a pastoralist in the Kimberley region of Western Australia.

Hector Neil McLarty was a Western Australian Police officer, and customs detective. During his service as a police officer he accompanied future Premier John Forrest on two expeditions and was in charge of the officers attempting to capture the Fenian escapees on the Catalpa.

Barley, a member of the grass family, is a major cereal grain grown in temperate climates globally. It was one of the first cultivated grains, particularly in Eurasia as early as 10,000 years ago. Barley has been used as animal fodder, as a source of fermentable material for beer and certain distilled beverages, and as a component of various health foods. It is used in soups and stews, and in barley bread of various cultures. Barley grains are commonly made into malt in a traditional and ancient method of preparation.

De Grey Station is a pastoral lease formerly a sheep station and now a cattle station approximately 80 kilometres (50 mi) east of Port Hedland on the mouth of the De Grey River in the Pilbara Region of Western Australia. 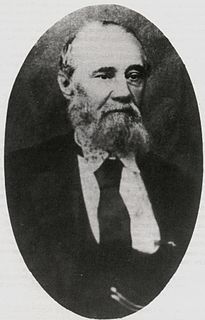 John Hill was an English explorer of South Australia and part of the European exploration of Australia. Hill was the first European to see and traverse the Clare Valley.

Edward Bate Scott was a pioneering colonist of South Australia who accompanied Edward John Eyre on several journeys and had a later career with the South Australian Police Force.

Cowits was Western Australia's first Aboriginal policeman, and was a member of a number of early exploratory expeditions.

Peter Barrow was a son of Sir John Barrow, 1st Baronet, and an early settler in the colony of Western Australia, becoming a magistrate and Guardian of Aborigines, Anglican priest and school teacher in York, Western Australia. He left the colony after only two years and became a British consul.