The lake is located off of Clarkston Road just east of Joslyn Road. [2]

On the east shore of Tommys Lake is Camp Agawam. The camp was a boy scout camp first begun in 1918 [3] by the Boy Scouts of America's (B.S.A.) Clinton Valley Council. The 140-acre camp served as a summer camp for countless scouts in Oakland County until being sold by the B.S.A.'s Great Lakes Council to Orion Township in 2014. 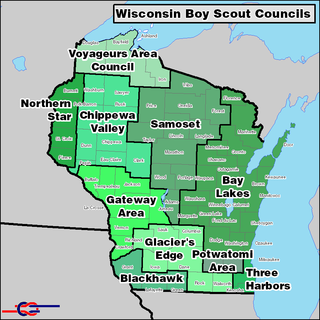 Scouting in Wisconsin has a long history, from the 1910s to the present day, serving thousands of youth in programs that suit the environment in which they live. 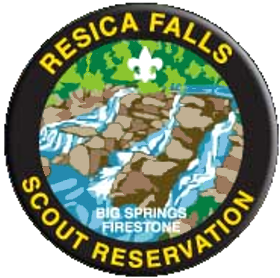 Resica Falls Scout Reservation is a camp in East Stroudsburg, Pennsylvania operated by the Cradle of Liberty Council of the Boy Scouts of America. 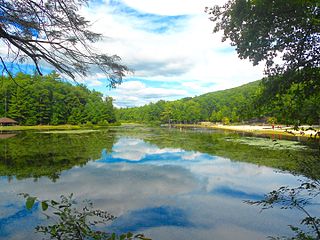 The Great Lakes Field Service Council is a field service council of the Michigan Crossroads Council, a local council of the Boy Scouts of America. It serves the Detroit metropolitan area and covers all of Wayne, Oakland and Macomb counties. The council currently has eight districts, one council service center, and four camp properties.

Gerber Scout Reservation (GSR), located in Twin Lake, Michigan is a resident camp owned and operated by the Michigan Crossroads Council of the Boy Scouts of America. It began operation in 1950 and had its first official summer camp program in 1951. The Original property was purchased through a gift of 275 shares from Dan Gerber, President of the famous baby food company. The reservation operates two camps; the Boy Scout Camp, Gerber Scout Camp and the Cub Scout Camp, Betty Ford Cub Scout and Webelos Adventureland, as well as numerous year round weekend programming outside of the summer months.

Water and Woods Field Service Council is a field service council of the Michigan Crossroads Council that serves youth in the central and northeastern Lower Peninsula of Michigan. The Council is headquartered in Flint, Michigan with service centers located in Auburn, Lansing, and Port Huron. The Water and Woods Field Service Council is the result of a merger in 2012 of Lake Huron Area Council, Blue Water Council, Tall Pine Council and Chief Okemos Council.

The Bay-Lakes Council is the Boy Scouts of America (BSA) council serving eastern Wisconsin and Upper Michigan. Headquartered in Appleton, Wisconsin, it is geographically one of the largest local BSA councils. Bay-Lakes Council #635 was formed on July 1, 1973, the product of a merger between six east Wisconsin councils. The council is served by Kon Wapos Lodge #635 of the Order of the Arrow.

The Theodore Roosevelt Council, 386 is a local council of the Boy Scouts of America. It is one of the nation's oldest, having been home to its namesake, the former US President, who was a founding member of BSA.

Madron Lake is a 58.638-acre (23.730 ha) lake situated on the northwestern quadrant of Buchanan Township in Berrien County, Michigan, United States. The outlet of Madron Lake drains west into the East Branch of the Galien River. Buchanan Township maintains a public boat launch off Burgoyne Road. Boats may be powered with electric engines only.

Long Lake is the largest lake in Grand Traverse County, Michigan. It is located about 15 minutes west of Traverse City. It is locally known for being a great fishing and recreation lake, especially boating its 4.6 square miles. The Carter-Strong Bird Sanctuary is a protection area at the southwestern end of the lake. Long Lake is the 36th largest lake in Michigan by surface area.

Van Norman Lake is a private, all-sports, 66-acre lake along the main branch of the Clinton River, in Oakland County, in the U.S. state of Michigan. Most of the lake lies within Independence Township; however, the southern portion of the lake is in Waterford Township.

Greens Lake is a private, all-sports, 117-acre lake along the main branch of the Clinton River. The lake lies within Independence Township in Oakland County, Michigan.

Sylvan Lake is an all-sports, 458-acre Oakland County, Michigan lake along the main branch of the Clinton River.

Williams Lake is a 155-acre all-sports lake in Waterford Township in Oakland County, Michigan in the Clinton River watershed.

Lester Lake is a private, all-sports, 12-acre Oakland County, Michigan lake along the main branch of the Clinton River.

Eagle Lake is a 55-acre lake in central Oakland County, Michigan. The lake has a maximum depth of 20 feet. It is located in Waterford Township.

Otter Lake is an all-sports, 74-acre Oakland County, Michigan lake along the main branch of the Clinton River.