The first medical college of Arunachal Pradesh Tomo Riba Institute of Health and Medical Sciences is named after him.

The National Democratic Alliance (NDA) is a Indian political alliance made up of center-right and right-wing political parties and led by the Bharatiya Janata Party (BJP). It was founded in 1998 and currently controls the Indian union government as well as the government of 18 Indian states. 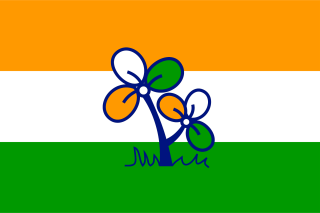 All India Trinamool Congress is an Indian national political party mostly active in West Bengal. The party is led by its founder and current chief minister of West Bengal Mamata Banerjee. Following the 2019 general election, it is currently the fifth-largest party in the Lok Sabha with 22 seats. Since its inception the party has been at the forefront of the anti-communist movement in West Bengal.

Arunachal Congress (AC) was a regional political party in the Indian state of Arunachal Pradesh.

Peoples Party of Arunachal, a regional political party in the Indian state of Arunachal Pradesh. It was founded in September 1977 by Bakin Pertin, Oken Lego and L. Wanglat as president, Vice President and General Secretary of the party. Tomo Riba resigned from PK Thungon government Congress Party and joined PPA as Vice President of the Party. Currently, Kamen Ringu is the Chairman of the party. They were in power in Arunachal until all of their MLAs defected back to Indian National Congress.

Sikkim Democratic Front (SDF) is a regional political party in the Indian state of Sikkim. It was the ruling party in Sikkim from 12 December 1994 to 23 May 2019. 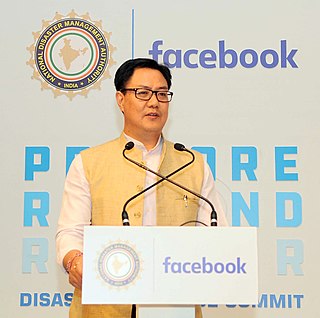 Akhilesh Yadav is an Indian politician and the president of the Samajwadi Party who has served as the 20th Chief Minister of Uttar Pradesh from 2012 to 2017. Having assumed office on 15 March 2012 at the age of 38, he is the youngest person to have held the office. Yadav is the Member of Parliament from Azamgarh in the 17th Lok Sabha since 2019. His first significant success in politics was being elected as the Member of the Lok Sabha for the Kannauj constituency. He is the son of veteran politician Mulayam Singh Yadav, the founder-patron of Samajwadi Party who has served as the Minister of Defence in Government of India and three terms as Chief Minister of Uttar Pradesh. 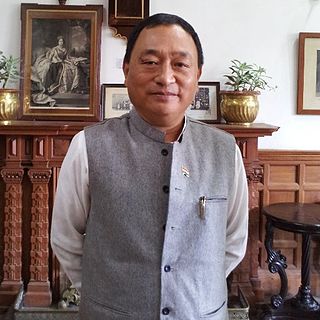 Ninong Ering is an Indian politician, belonging to the Indian National Congress. He represented the Arunachal East in Lok Sabha, the lower house of Indian Parliament from 2009 to 2019.

Takam Sanjoy is an Indian politician and Member of Parliament belonging to the Indian National Congress. In the 2009 general election he was elected to the 15th Lok Sabha, the lower house of the Parliament of India from the Arunachal West constituency of Arunachal Pradesh.

Bakin Pertin was an Indian politician. Pertin belonged to the Adi people. He was one of the first elected Lok Sabha members of Arunachal Pradesh, and later became a Member of the Legislative Assembly of that state.

The second elections to the Arunachal Pradesh Legislative Assembly were held on 3 January 1980. The election was held simultaneously to the 1980 Lok Sabha election. 30 seats were up for election. A total of 95 candidates contested; 28 from the Indian National Congress (Indira), 28 from the People's Party of Arunachal, 11 from the Indian National Congress (Urs) and 28 independents. The PPA candidate in the Niausa Kanubari constituency, Wanglhu Wangshu, was elected unopposed. 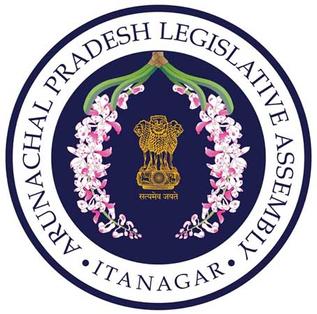 Sobeng Tayeng is an Indian politician. He was elected to the Lok Sabha, the lower house of the Parliament of India from the Arunachal East constituency of Arunachal Pradesh as a member of the Indian National Congress.