Kazuya Ichijō is a Japanese voice actor. He is married to Minami Hokuto, better known by her stage name Hitomi. He also provided the voice of adult video games.

Ojamajo Doremi, alternatively titled Magical DoReMi in English, is a Japanese magical girl anime television series created by Toei Animation. It focuses on a group of elementary school girls, led by Doremi Harukaze, who become witch apprentices. The series aired in Japan on TV Asahi between February 1999 and January 2003, spanning four seasons and 201 episodes, and was followed by an original video animation series released between June and December 2004. An English-language version of the first season, produced by 4Kids Entertainment, aired in North America in 2005. The franchise has also spawned two companion films, various manga adaptations, and a sequel light novel series. A 20th anniversary film titled Looking for Magical Doremi was released on November 13, 2020. 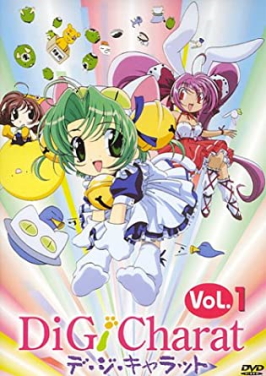 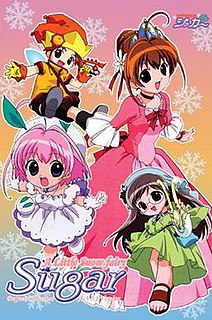 A Little Snow Fairy Sugar is a Japanese anime series developed by J.C.Staff. It premiered in Japan on TBS on October 2, 2001, and ran for 24 episodes until its conclusion March 26, 2002. A two-episode OVA was also released for the series. The series was licensed for North America by Geneon Entertainment, but after the closure of Geneon, its DVD releases went out of print. In 2009, Sentai Filmworks had acquired the license.

Koge-Donbo* (こげどんぼ*), is a Japanese manga artist. Koge-Donbo* started her career soon after college as a doujinshi artist. She got the idea of a unique pen-name, Kobe-Donbo* from Akira Toriyama's pet cat. She made her first official US appearance at Otakon 2004 in Baltimore, MD as a Guest of Honor. Before that, she appeared at the AnimeGamers USA retail store in Los Angeles, California on July 7, 2002, for an autograph session promoting her Chocola 2001 artbook. She returned for another autograph session at the same store on August 3, 2004. She was a Guest of Honor at Anime Expo 2006, presenting the world premiere of the new Di Gi Charat animation series.

Mandy Clark is an American voice actress, primarily noted for her role as Tomo Takino in the English-language dub of Azumanga Daioh. She auditioned for ADV Films in the year 2000 without prior drama training, and landed her first episode role in Excel Saga. She went on retired from voice acting in 2004 in order to begin attending college. In early 2006 she returned to Houston and has since graduated. She is currently working as a freelance digital artist. She was married in 2009.

Asami Sanada is a Japanese actress and voice actress. She is affiliated with Amuleto. She is best known as the voices of Vita in the Magical Girl Lyrical Nanoha series, Jun Sakurada in the Rozen Maiden series, Kurumi Tokisaki in the Date A Live series, Sawako Yamanaka in the K-On! series, and her debut role as Dejiko in Di Gi Charat.

Takayuki Yamaguchi is a Japanese voice actor who works for 81 Produce.

Di Gi Charat Nyo! is a Japanese anime and an alternate version of Di Gi Charat. The series features Dejiko, and Puchiko, two catgirls who travel to Earth, for princess training, where they are accidentally split up.

Bimonthly Comi Digi was a Japanese seinen manga magazine edited by Broccoli, published by Flex Comix, and sold through Soft Bank Creative. The magazine is sold bimonthly on even-numbered months on the twenty-first. The magazine was originally published in April 2003 under the title Quarterly Di Gi Charat, after the series Di Gi Charat published by Broccoli Books. The magazine was suspended in July 2004, but restarted publication in October 2004 under the new title Comic Di Gi Charat and was sold bimonthly as a special edition version of Comic Rush. The title was changed again in October 2005 to simply Comi Digi, and lasted for two issues until the title was changed a final time to the current Comi Digi + on April 21, 2006. The final issue was released 21 August 2008.

Takashi Matsuyama is a Japanese actor and voice actor; he is well known for playing Takeo Saeki in The Grudge and Mamoru Satake in Zipang.