Tomoe Gozen (巴 御前, Japanese pronunciation:  [tomo.e] , [3] ) was a onna-musha, who appeared in 14th century Japanese literature. [4] According to lore, she served Minamoto no Yoshinaka during the Genpei War and was a part of the conflict that led to the first shogunate. [5] [6] Her family had strong affiliations with Yoshinaka.

Although never proven to be a historical figure, her story influenced several generations of samurai. Tomoe is often celebrated in books, music, poems, films, historical novels and culture in general. [6]

Her father, Nakahara Kanetō, was a strong supporter and foster father of Yoshinaka, having raised him since he was two. Her mother was Yoshinaka's wet nurse. Two of her elder brothers also served Yoshinaka as generals. [6] She is best known for her participation in the Battle of Awazu in 1184.

According to epic account written at the beginning of the 14th century,

Tomoe was especially beautiful, with white skin, long hair, and charming features. She was also a remarkably strong archer, and as a swordswoman she was a warrior worth a thousand, ready to confront a demon or a god, mounted or on foot. She handled unbroken horses with superb skill; she rode unscathed down perilous descents. Whenever a battle was imminent, Yoshinaka sent her out as his first captain, equipped with strong armor, an oversized sword, and a mighty bow; and she performed more deeds of valor than any of his other warriors.

In 1182 she commanded 300 samurai in a struggle against 2,000 warriors of the rival Taira clan. After defeating the Taira and driving them into the western provinces, Yoshinaka took Kyoto and desired to be the leader of the Minamoto clan. His cousin Yoritomo was prompted to crush Yoshinaka, and sent his brothers Yoshitsune and Noriyori to kill him. Yoshinaka fought Yoritomo's forces at the Battle of Awazu on February 21, 1184, where Tomoe Gozen purportedly took at least one head of the enemy. Although Yoshinaka's troops fought bravely, they were outnumbered and overwhelmed. When Yoshinaka was defeated there, with only a few of his soldiers standing, he told Tomoe Gozen to flee because he wanted to die with his foster brother Imai no Shiro Kanehira and he said that he would be ashamed if he died with a woman. [8]

There are varied accounts of what followed. At the Battle of Awazu in 1184, [9] she is known for beheading Honda no Morishige of Musashi. [10] She is also known for having killed Uchida Ieyoshi and for escaping capture by Hatakeyama Shigetada. [11] After Tomoe Gozen beheaded the leader of the Musashi clan and presented his head to her master Yoshinaka. [12]

In fiction and culture 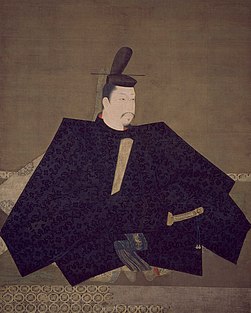 Minamoto no Yoritomo was the founder and the first shōgun of the Kamakura shogunate of Japan. He ruled from 1192 until 1199. His Buddhist name was Bukōshōgendaizenmon (武皇嘯原大禅門). He was the husband of Hōjō Masako who acted as regent (shikken) after his death. 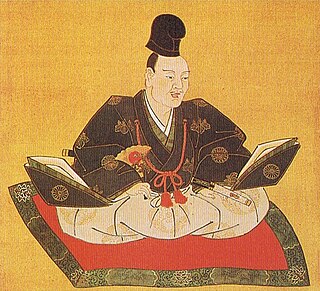 The Taira was one of the four most important clans that dominated Japanese politics during the Heian, Kamakura and Muromachi Periods of Japanese history - the others being the Fujiwara, the Tachibana, and the Minamoto. The clan is divided into four major groups, named after the emperor they descended from: Kanmu Heishi, Ninmyō Heishi, Montoku Heishi, and Kōkō Heishi. 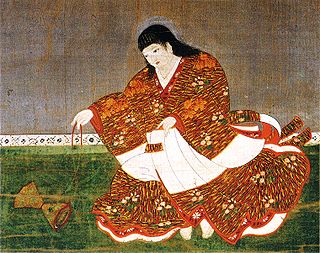 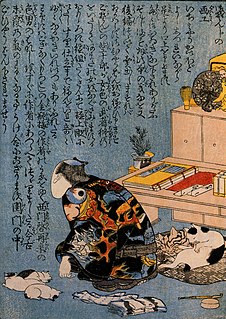 Utagawa Kuniyoshi was one of the last great masters of the Japanese ukiyo-e style of woodblock prints and painting. He was a member of the Utagawa school. 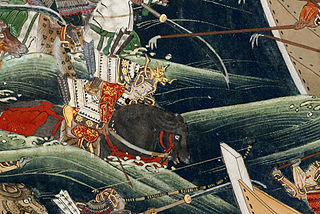 The Tale of the Heike is an epic account compiled prior to 1330 of the struggle between the Taira clan and Minamoto clan for control of Japan at the end of the 12th century in the Genpei War (1180–1185). Heike (平家) refers to the Taira (平), hei being the Sino-Japanese reading of the first Chinese character. Note that in the title of the Genpei War, "hei" is in this combination read as "pei" and the "gen" (源) is the first kanji used in the Minamoto clan's name. 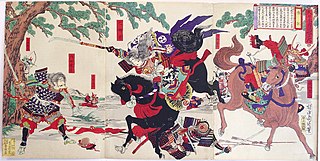 Minamoto no Yoshinaka made his final stand at Awazu, after fleeing from his cousins' armies, which confronted him after he attacked Kyoto, burning the Hōjūjiden, and kidnapping Emperor Go-Shirakawa. During the pursuit he was joined by his foster brother Imai Kanehira.

Taira no Koremori was one of the Taira clan's commanders in the Genpei War of the late Heian period of Japanese history.

Lady Hangaku was a onna-musha warrior, one of the relatively few Japanese warrior women commonly known in history or classical literature.

Onna-musha (女武者) is a term referring to female warriors in pre-modern Japan. These women engaged in battle alongside samurai men mainly in times of need. They were members of the bushi (samurai) class in feudal Japan and were trained in the use of weapons to protect their household, family, and honour in times of war. Significant icons such as Tomoe Gozen and Nakano Takeko are famous examples of onna-musha.

Sasaki Takatsuna was a Japanese samurai commander in the Genpei War, the great conflict between the Minamoto and Taira clans.

Wada Yoshimori was an early Kamakura period military commander. A gokenin of the Kamakura shogunate, he was the first director (bettō) of the Samurai-dokoro.

Kajiwara Kagesue, also known as Kajiwara Kagetoki, was a samurai in service to the Minamoto clan during the Genpei War of Japan's late Heian period. 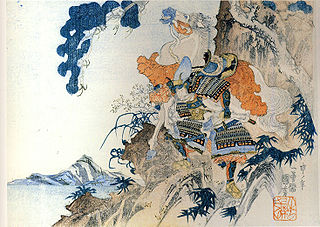 Hatakeyama Shigetada was a samurai who fought in the Gempei War, in Japan. Originally fighting for the Taira clan, he switched sides to the Minamoto clan for the battle of Dan-no-ura, and ended the war on the winning side. 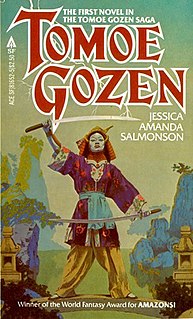 Tomoe Gozen is a novel by Jessica Amanda Salmonson, published in 1981. Set in an alternate universe resembling feudal Japan, the book combines the tale of historical female samurai Tomoe Gozen with the legends and creatures of Japanese mythology to create an action-adventure fantasy. It is the first part of the Tomoe Gozen Trilogy which met with some success in the 1980s fantasy novel market. The series is notable for its unusual, highly researched samurai background and feminist story slant. 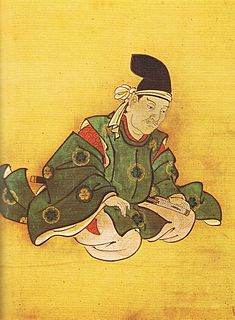 Imai Kanehira (1152-1184) was a military commander of the late Heian Period of Japan.

Uchida Ieyoshi was a samurai warrior of the Kiso Minamoto clan who was most famous for dying at the hands of Tomoe Gozen, the famous onna-bugeisha, whom he failed to capture in battle at the Battle of Awazu.