Tomohiro Nomura (野村 智宏, Nomura Tomohiro, born 11 October 1975) is a Japanese track and field athlete. He competed in the men's high jump at the 1996 Summer Olympics. [1]

Nomura is a Japanese surname.

Tadahiro Nomura is one of the most famous judo competitors in Japan. He is the only judoka in the world who has won three Olympic gold medals in a row, all in the extra lightweight (-60 kg) division.

Katsuya Nomura was a Japanese Nippon Professional Baseball (NPB) catcher and manager. During his over 26-season playing career mostly spent with the Nankai Hawks, he became one of NPB's greatest offensive catchers. He was awarded the Pacific League MVP Award five times, became the first NPB batter to win the Triple Crown in 1965, and holds the record for second-most home runs and RBIs in NPB history.

Toyokazu Nomura is a retired judoka who competed in the half-middleweight (70 kg) division.

Tomohiro Matsunaga is a Japanese freestyle wrestler. Matsunaga was born in Shizuoka. At the 2008 Summer Olympics in Beijing, he won silver in his category.

Tomohiro Miyoshi is a retired Japanese male butterfly swimmer. He represented Japan at the 1992 Summer Olympics. His best result in two individual starts in Barcelona, Spain was the 17th place (2:01.27) in the Men's 200m Butterfly event.

Adama Diata is a male freestyle wrestler from Senegal. He participated in the Men's freestyle 55 kg at the 2008 Summer Olympics. In the round of 16, he lost to Tomohiro Matsunaga from Japan. In the repechage round, he was beaten by Turkish Sezar Akgul.

Toshiaki Fushimi is a Japanese cyclist. He won the Silver Medal in the Men's team sprint in the 2004 Summer Olympics along with Masaki Inoue and Tomohiro Nagatsuka. In Japan, he is mostly known as a keirin cyclist, with over 400 victories.

Tomohiro Nagatsuka is a Japanese cyclist. He won the Silver Medal in the Men's team sprint in the 2004 Summer Olympics along with Toshiaki Fushimi and Masaki Inoue. In Japan, he is mostly known as a keirin cyclist.

Masaki Inoue is a Japanese cyclist. He won the Silver Medal in the Men's team sprint in the 2004 Summer Olympics along with Toshiaki Fushimi and Tomohiro Nagatsuka. In Japan, he is mostly known as a keirin cyclist. In 2008, he won the Keirin Grand Prix and was the year's top money winner.

Tomohiro Kida is a Japanese sport shooter who competed in the 1996 Summer Olympics.

Iori Katsura is a professional Japanese baseball player. He plays catcher for the Chunichi Dragons.

Tomohiro Osawa was a Japanese sprinter. While still a student at Waseda University, he competed in the men's 100 metres at the 1988 Summer Olympics, He worked as a coach at Waseda after graduation. He died of pancreatic cancer on 6 April 2016.

Masahiko Nomura is a Japanese rower. He competed in the men's eight event at the 1988 Summer Olympics. 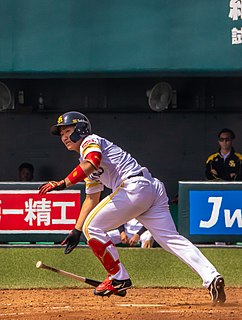