Tomohiro Okada (岡田智博) is an interdisciplinary creative and innovation developer, researcher, and policymaker, Director of Creative Cluster. [1] Since 1995 he has been active in electronic media and creative innovation in Japan especially promoting young talent in new media art, interaction design as a researcher, producer, curator, writer and organizer of numerous creative productions, and policy designs for government and institutions for economic and industry and culture affairs. He has written various policy papers for art and creative and civil development of various local governments and agencies, lectured and held positions at various universities, participated in conferences and symposia, and has worked as a consultant.

Tomohiro OKADA is PhD of Tokyo University of the Arts in Arts Policy and Creative Industries and Innovation, graduated from The University of Tokyo with M.A. in information studies, and Kyushu Institute of Design with M.S. in visual art and design studies.

He has been the director of non-profit new media culture and social development nationwide initiative, Creative Cluster Institute, in Japan, also the director of culture and ICT policy and planning consultancy company, Cool States Communications Laboratories of Tokyo.

He is also teaching Creative Economics and Creative and Art Management at Center of Creative City at Osaka City University as a researcher, Aoyama Gakuin University (Under Grad and Grad), Komazawa University (2008–2017) and Atomi University (Tokyo) as a lecturer.

Okada is a Japanese surname. Notable people with the name include:

Evan Roth is a US artist who applies a hacker philosophy to an art practice that visualizes transient moments in public space, online and in popular culture.

Fumio Nanjo is a curator and art historian. Since 2006 he has been the director of the Mori Art Museum in Tokyo. A graduate of Keio University, Nanjo was previously Director of the Institute of Contemporary Arts in Nagoya (1986–1990) and served as commissioner of the Japan Pavilion at the Venice Biennale (1997). 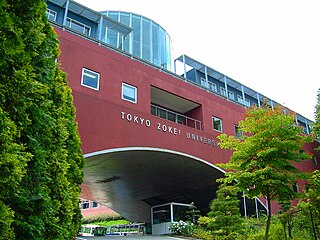 Tokyo Zokei University is a private university in Hachioji, Tokyo, Japan, founded in 1966 by Japanese art educator, fashion designer and design journalist, Yoko Kuwasawa (1910-1977). It is a four-year art college offering both bachelor's and master's degrees in studio arts.

PHUNK is a Singapore-based contemporary art and design collective founded by Alvin Tan, Melvin Chee, Jackson Tan, and William Chan in 1994. They have exhibited and collaborated with artists, designers and fashion brands around the world, producing work across a diverse range of mediums.

Toshiki Okada is a Japanese playwright, theater director, novelist, and founder of the theatrical company chelfitsch. He is known for "his use of hyper-colloquial Japanese and his unique choreography."

ZERO1: The Art and Technology Network is a 501 (c) 3 non-profit organization dedicated to connecting creative explorers from art, science, and technology to provoke new ideas that serve to shape a more resilient future.

Mai Yoshida is a Japanese short animation artist. Yoshida is based in London, and showcases her work internationally at art exhibitions and film festivals. She moved to London to study art in 2000. After she completed Illustration BA at Camberwell College of Art, she started her MA in Communication Art & Design at Royal College of Art and graduated in 2006.

Hiromi Marissa Ozaki, better known by the pseudonym Sputniko!, is a British/Japanese artist and designer who specializes in the field of speculative and critical design. After majoring in BSc Mathematics and Computer Science at Imperial College, London, she went on to pursue a master's degree in design at the Royal College of Art. Sputniko! is known for her film and multi-media installation works inspired by how technology impacts society and people's values – in particular focusing on gender issues. She has recently presented her works in exhibitions such as the 2019 Cooper Hewitt Design Triennial, 'Japanorama' in Pompidou Centre-Metz, Setouchi Art Trienniale, New Sensorium at the ZKM Art Center in Germany (2016), Future and the Arts at the Mori Art Museum (2016), Collecting Future Japan – Neo Nipponica at the Victoria & Albert Museum (2016). From 2013 to 2017, Sputniko! was an assistant professor at the MIT Media Lab where she found and directed the Design Fiction research group. To date, she has had pieces included in the permanent collections of museums such as the V&A and the 21st Century Museum of Contemporary Art, Kanazawa. Currently, she resides as the associate professor of RCA-IIS Design Lab in the Institute of Industrial Science at the University of Tokyo as well as associate professor of the Department of Design at Tokyo University of the Arts.

Erkki Huhtamo is a media archaeologist, exhibition curator, and professor at the University of California, Los Angeles in the Departments of Design Media Arts and Film, Television, and Digital Media.

Shiro Takatani is a Japanese artist. He currently lives and works in Kyoto. Co-founder and visual creator of the group Dumb Type since 1984, he also became artistic director of the group from 1995 and also started an active solo career in 1998.

Maayan Sheleff is an independent art curator and artist based in Tel Aviv, Israel. Her projects explore social and political issues through participatory practices, at the intersection of art and technology. 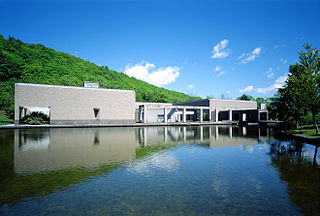 Sapporo Art Park is an open-air complex of sites in Minami-ku, Sapporo, dedicated to visual and performing art exhibits and facilities. Constructed in 1986, the park was established "to cultivate unique new culture in Sapporo and create an environment in which the city, the arts, and culture exist in harmony with Sapporo’s natural beauty." The park is situated in the forests on the outskirts of Sapporo, close to Sapporo City University. In addition to art and sculpture displays, the park also rents out workshops, studios, and other spaces for creative arts.

Video Hiroba was a Japanese video art collective founded as a result of the first Japanese Video Art symposium and exhibition, Video Communication/Do it Yourself Kit, organized by Michael Goldberg, Nakaya Fujiko, and Yamaguchi Katsuhiro. Members of Video Hiroba were interested in exploring the possibilities and production of video as a form of mutual communication technology in the public sphere.

Katsuhiro Yamaguchi was a Japanese artist and art theorist based in Tokyo and Yokohama. Through his collaborations, writings, and teaching, he promoted an interdisciplinary avant-garde in postwar Japan that served as the foundation for the emergence of Japanese media art in the early 1980s, a field in which he remained active until his death. He represented Japan at the 1968 Venice Biennale and the 1975 Bienal de São Paulo, and served as producer for the Mitsui Pavilion at Expo '70 in Osaka.