Tomohisa Nemoto (根本 朋久, Nemoto Tomohisa) is a Japanese professional baseball player. He was born on March 21, 1986 in Motomiya, Fukushima, Japan. He played two years for the Chiba Lotte Marines for three years, from 2008 to 2010, and from 2011 on, he has been playing for the Fighters. 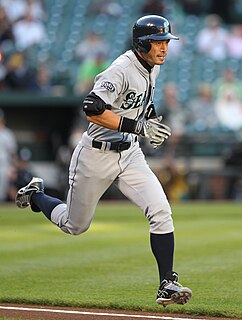 Ichiro Suzuki, often referred to mononymously as Ichiro, is a Japanese former professional baseball outfielder who played 28 seasons combined in top-level professional leagues. He spent the bulk of his career with two teams: nine seasons with the Orix Blue Wave of Nippon Professional Baseball (NPB) in Japan, where he began his career, and 14 with the Seattle Mariners of Major League Baseball (MLB) in the United States. After playing the first 12 years of his MLB career for the Mariners, Ichiro played two and a half seasons with the New York Yankees before signing with the Miami Marlins. Ichiro played three seasons with the Marlins before returning to the Mariners in 2018. Ichiro established a number of batting records, including MLB's single-season record for hits with 262. He achieved 10 consecutive 200-hit seasons, the longest streak by any player in history. Between his major league career in both Japan and the United States, Ichiro has the most hits by any player in top-tier professional leagues. He also has recorded the most hits of all Japanese-born players in MLB history.

The Yomiuri Giants are a professional baseball team based in Bunkyo, Tokyo, Japan. The team competes in the Central League in Nippon Professional Baseball. They play their home games in the Tokyo Dome, opened in 1988. The team's owner is Yomiuri Shimbun Holdings, Japan's largest media conglomerate which also owns two newspapers and the Nippon Television Network.

The Fukuoka SoftBank Hawks are a Japanese baseball team based in Fukuoka, Fukuoka Prefecture. The team was bought on January 28, 2005 by the SoftBank Corporation. 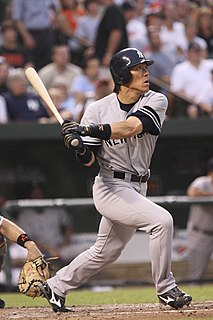 The Saitama Seibu Lions are a professional baseball team in Japan's Pacific League based north of Tokyo in Tokorozawa, Saitama. Before 1979, they were based in Fukuoka in Kyushu. The team is owned by a subsidiary of Prince Hotels, which in turn is owned by the Seibu Group. The team experienced a recent period of financial difficulty, but the situation brightened when the team received a record ¥6 billion posting fee from the Boston Red Sox for the right to negotiate a contract with Daisuke Matsuzaka. Between 1978 and 2008, the team logo and mascot were based on the adult version of Kimba the White Lion, a classic Japanese anime series by Osamu Tezuka. In 2004, former Seibu Lions player Kazuo Matsui became the first Japanese infielder to play in Major League Baseball.

Swing Girls is a Japanese 2004 comedy film directed and co-written by Shinobu Yaguchi. The plot follows a group of inept high school girls who form a big band. The cast includes Juri Ueno, Yuta Hiraoka, Shihori Kanjiya, Yuika Motokariya and Yukari Toyashima. The film ranked 8th at the Japanese box office in 2004, and won seven prizes at 28th Japan Academy Prize, including "Most Popular Film" and "Newcomer of the Year" for Yuta Hiraoka and Juri Ueno.

Mezzo Forte is a 2000 OVA directed by Yasuomi Umetsu, but in the United States these OVAs are edited into an anime movie and released it on DVD on the same year.

Major is a Japanese sports manga series written and illustrated by Takuya Mitsuda. It has been serialized in Shogakukan's Weekly Shōnen Sunday from August 1994 to July 2010 and has been collected in 78 tankōbon volumes.

Nemoto is a Japanese surname. Notable people with the surname include. 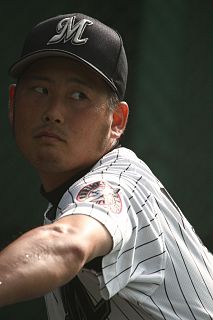 Tomohisa is a masculine Japanese given name. Notable people with the name include: 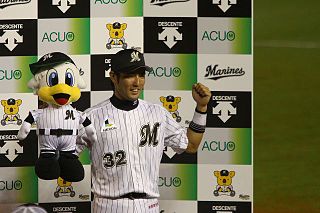 Shunichi Nemoto, nicknamed "Nemo", is a former Japanese professional baseball infielder. He was born on July 8, 1983. He is currently playing for the Chiba Lotte Marines of the NPB.

Rikuo Nemoto is a former professional baseball catcher and manager in Japan's Nippon Professional Baseball. He was elected to the Japanese Baseball Hall of Fame in 2001.