Tomohisa Yuge (弓削智久, Yuge Tomohisa, born 25 May 1980) is a Japanese actor who has had roles in numerous TV Asahi Tokusatsu shows, including Kamen Rider Kabuto , as well as a number of films. 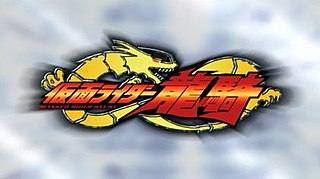 Kamen Rider Ryuki is a Japanese tokusatsu television series. The twelfth installment in the Kamen Rider Series of tokusatsu shows, it was a joint collaboration between Ishimori Productions and Toei, and it was shown on TV Asahi from February 3, 2002 to January 19, 2003. The series marked the franchise's switch from Columbia Music Entertainment to Avex Group, which continues to produce music for the Kamen Rider Series today. 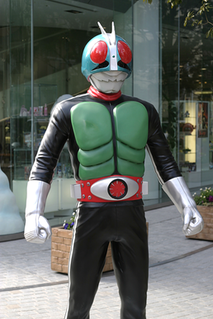 Ryuta Tasaki is a Japanese film director from Tokyo. Tasaki is most known for directing episodes of Pretty Guardian Sailor Moon, Cutie Honey: The Live, and the Super Sentai and Kamen Rider series.

Shōji Yonemura is a Japanese writer from Fukuoka Prefecture. He is known mainly for his work in anime and tokusatsu. After having graduated from Tokyo Zokei University, he worked as a freelance writer in Arakawa and would attend various film festivals. Then, he studied with Kanji Kashiwabara and proceeded to win the Otomo Shoji Award seven times and became a screenwriter.

Hidenori Tokuyama is a Japanese actor and singer. A fan of tokusatsu, Tokuyama has had a role in several series, most notably Sou Yaguruma/Kamen Rider TheBee/Kamen Rider KickHopper in Kamen Rider Kabuto and Hiroto Sutō/Go-on Gold in Engine Sentai Go-onger. Kamen Rider Kabuto the Movie: God Speed Love is the theatrical film adaptation of the Kamen Rider Kabuto TV series directed by Hidenori Ishida and written by Shōji Yonemura. Unlike previous Kamen Rider movies, its serves a prologue of sorts to the TV series rather than following its storyline. The movie shows an alternate timeline where the close relations between Riders did not exist and the impact of the first meteor evaporated all of Earth's oceans. Seven years after the meteor hit Earth, ZECT pretends to use a passing comet to refill the Earth's oceans, while in fact they are pulling another meteor to crash on Earth, one large enough to wipeout all of humanity.

Hitomi Kurihara is a Japanese actress from Ibaraki Prefecture. She has appeared in various tokusatsu dramas. Her most prominent role has been as Smart Lady in Kamen Rider 555. She also sang her character's song on the Kamen Rider 555 soundtrack entitled "My Name is Smart Lady."

Jun Kaname is a Japanese actor and tarento. He was born in Mitoyo, Kagawa and made his drama debut as an actor in 2001 in the Tokusatsu Series "Kamen Rider Agito". He appears not only in TV dramas but also in movies, commercial messages, variety TV programs, plays, and music videos. Kaname married a non-celebrity woman April 28, 2013. 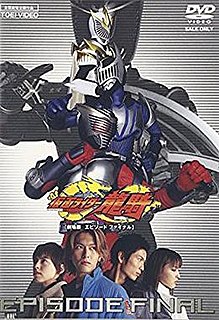 Kamen Rider Ryuki The Movie: Episode Final is the theatrical superhero film adaptation of the Japanese 2002 Kamen Rider series, Kamen Rider Ryuki, directed by Ryuta Tasaki and written by Toshiki Inoue. The catchphrases for the movie are "An Epic Battle Beyond Imagination." and "Ryuki, a Shocking Conclusion. Final Episode, the Movie.".

Toshiki Inoue is a Japanese screenwriter from Saitama Prefecture. He is known for his work on anime and tokusatsu dramas and films. He is the son of Masaru Igami, who himself was a screenwriter for tokusatsu dramas. He is also a manga author, and has written both Mebius Gear and Sword Gai.

Yasuko Kobayashi is a Japanese anime and tokusatsu drama screenwriter who has been involved in various television shows throughout her career, beginning in 1993 with Tokusou Robo Janperson.

Jun Watanabe is a Japanese stunt performer and suit actor from Takarazuka, Hyōgo Prefecture affiliated with Japan Action Enterprises. He has been cast in many leading roles in the Super Sentai and Kamen Rider series, portraying a diverse range of characters. He has a child with his current wife.

True Spark is a 24-hours TV station for Kids provided by TrueVisions. It broadcast cartoons that come from Japan, USA and Europe. It broadcasts on Channel 444 (Digital) and Channel 28 (Analog).

The Locker is a 2004 Japanese horror and thriller film directed by Kei Horie. The film stars Asami Mizukawa, Shūji Kashiwabara, Chisato Morishita, and Mayuka Suzuki in the lead roles.