Tomoko Fuse (布施 知子, Fuse Tomoko, born in Niigata, 1951) is a Japanese origami artist and author of numerous books on the subject of modular origami, and is by many considered as a renowned master in such discipline. [1]

Fuse first learned origami while in the hospital as a child. When she was 19 years old, she studied for two and a half years with origami master Toyoaki Kawai. She started publishing origami books in 1981, and has since published more than 60 books (plus overseas editions) as of 2006 [update] . She has created numerous origami designs, including boxes, kusudama , paper toys, masks, modular polyhedra, as well as other geometric forms and objects, such as origami tessellations, with publications in Japanese, Korean and English. She now resides with her husband Taro Toriumi, [2] a respected woodblock printmaker and etcher, in rural Nagano prefecture, Japan.

Origami is the art of paper folding, which is often associated with Japanese culture. In modern usage, the word "origami" is used as an inclusive term for all folding practices, regardless of their culture of origin. The goal is to transform a flat square sheet of paper into a finished sculpture through folding and sculpting techniques. Modern origami practitioners generally discourage the use of cuts, glue, or markings on the paper. Origami folders often use the Japanese word kirigami to refer to designs which use cuts.

The Ki Society is an aikido organization founded by Koichi Tohei in 1971, while he was the chief instructor at the Aikikai Hombu Dojo. The official Japanese name of the organization is Shin Shin Toitsu Aikido Kai (心身統一合気道会), but it is also known in English-speaking countries as "Ki Society". Its foundation reflected Tohei's differences with the Aikikai, and his own emphasis on developing the concept of Ki. Students of the art are graded in Ki and Aikido classes. Tohei's Ki lessons come from Shin Shin Tōitsu-dō (心身統一道), meaning "the way of realizing the [original] unity of mind and body". The martial discipline of the art is frequently referred to as Ki-Aikido, particularly in the Western world. 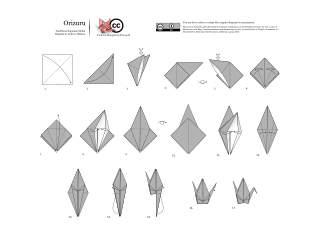 The Yoshizawa–Randlett system is a diagramming system used to describe the folds of origami models. Many origami books begin with a description of basic origami techniques which are used to construct the models. There are also a number of standard bases which are commonly used as a first step in construction. Models are typically classified as requiring low, intermediate or high skill depending on the complexity of the techniques involved in the construction. 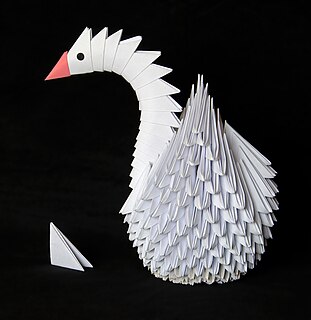 Modular origami or unit origami is a paperfolding technique which uses two or more sheets of paper to create a larger and more complex structure than would be possible using single-piece origami techniques. Each individual sheet of paper is folded into a module, or unit, and then modules are assembled into an integrated flat shape or three-dimensional structure, usually by inserting flaps into pockets created by the folding process. These insertions create tension or friction that holds the model together.

Makoto Yamaguchi, the Chairperson of Origami House, has taken an active part in origami as a professional creator after working with the Nippon Origami Association. In 1989, he opened "Gallery Origami House", a venue to showcase the works of origami creators. He has worked hard to encourage young creators to continue to improve their models, to interchange with foreign groups and creators abroad. His enthusiasm for origami has led him to become involved with origami associations around the world. JOAS Board of Directors President; Board member of NOA ; lifetime member of OrigamiUSA, member of British Origami Society and Chief Editor of "Origami Tanteidan" magazine.

The Tibetan eye chart is a tool allegedly developed by Tibetan monks. According to some authors, it can be used to train the muscles and nerves of the optical system, correcting visual problems. However, the International Orthoptic Association has found no scientific evidence of the effectiveness of this treatment. 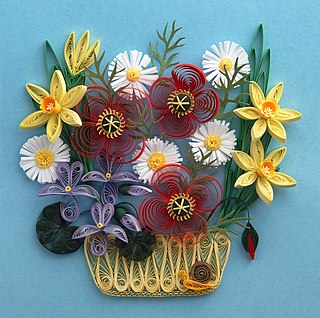 Paper craft is a collection of crafts using paper or card as the primary artistic medium for the creation of one, two or three-dimensional objects. Paper and card stock lend themselves to a wide range of techniques and can be folded, curved, bent, cut, glued, molded, stitched, or layered. Papermaking by hand is also an important paper craft.

The Japanese kusudama is a paper model that is usually created by sewing multiple identical pyramidal units together through their points to form a spherical shape. Alternately the individual components may be glued together. Occasionally, a tassel is attached to the bottom for decoration.

The Sonobe module is one of the many units used to build modular origami. The popularity of Sonobe modular origami models derives from the simplicity of folding the modules, the sturdy and easy assembly, and the flexibility of the system.

Kunihiko Kasahara is a Japanese origami master. He has made more than a hundred origami models, from simple lion masks to complex modular origami, such as a small stellated dodecahedron. He does not specialize in what is known as "super complex origami", but rather he likes making simple, elegant animals, and modular designs such as polyhedra, as well as exploring the mathematics and geometry of origami. A book expressing both approaches is Origami for the Connoisseur, which gathers modern innovations in polyhedral construction, featuring moderately difficult but accessible methods for producing the Platonic solids from single sheets, and much more.

The history of origami followed after the invention of paper and was a result of paper's use in society. Independent paper folding traditions exist in East Asia, and it is unclear whether they evolved separately or had a common source. 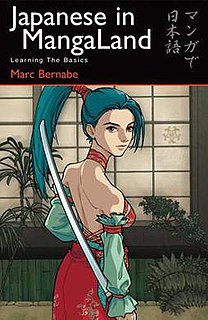 Japanese in MangaLand (マンガで日本語) is a series of educational books by Marc Bernabe designed to help teach Japanese using original, untranslated manga. Originally published in Spanish as Japonés en viñetas, it has since had translated versions published in English, German, French, Catalan, Italian, and Portuguese. There are three main books along with two workbooks.

Kosho Uchiyama was a Sōtō priest, origami master, and abbot of Antai-ji near Kyoto, Japan.

Lillian Rose Vorhaus Kruskal Oppenheimer was an American origami pioneer. She popularized origami in the West starting in the 1950s, and is credited with popularizing the Japanese term origami in English-speaking circles, which gradually supplanted the literal translation paper folding that had been used earlier. In the 1960s she co-wrote several popular books on origami with Shari Lewis. 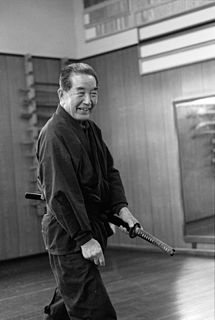 Risuke Ōtake, full name Ōtake Risuke Minamoto no Takeyuki, is a Japanese martial artist. He is a long time shihan of Tenshin Shōden Katori Shintō-ryū bujutsu, which he learned as a disciple of the previous teaching master Hayashi Yazaemon (1892-1964) from the time he entered the school at the age of 16, in 1942. In 1967, when Otake-sensei was 42 years old, he received gokui kaiden, the highest level of attainment in the tradition, and at the same time became the school's teaching master. He lives and teaches in rural location near Narita city, in Chiba Prefecture of Japan. The teachings of Tenshin Shōden Katori Shintō-ryū were designated an Intangible Cultural Asset of Chiba Prefecture in 1960, with Ōtake designated as guardian of the tradition.

The akuma (悪魔) is a malevolent fire spirit in Japanese folklore. It is also described as a category of undefined beings who brought afflictions on humans.