Tomoko Sawada(澤田 知子,Sawada Tomoko, born 1977 in Kobe, Japan) is a Japanese contemporary feminist photographer and performance artist. [1] [2] She has been included in numerous group shows in Japan, Europe and the US. Her first solo exhibition was in 1997 at Japan's Gallery Chat. In 2004 she was awarded the prestigious Kimura Ihei Memorial Photography Award for Young Japanese Photographer as well as the International Center of Photography Infinity Award in the category of Young Photographer. [3] 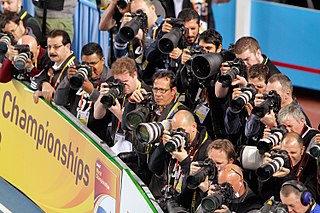 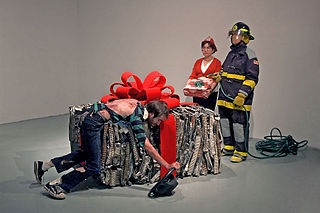 Performance art is a performance presented to an audience within a fine art context, traditionally interdisciplinary. Performance may be either scripted or unscripted, random or carefully orchestrated, spontaneous or otherwise carefully planned with or without audience participation. The performance can be live or via media; the performer can be present or absent. It can be any situation that involves four basic elements: time, space, the performer's body, or presence in a medium, and a relationship between performer and audience. Performance art can happen anywhere, in any type of venue or setting and for any length of time. The actions of an individual or a group at a particular place and in a particular time constitute the work.

Sawada graduated in 1998 with a degree in Media Design, then later in 2000 with a degree in Photography from the Seian University of Art and Design in Otsu, Shiga, Japan. Some of her works of art include ID-400, OMIAI♡, Costume, Schoolgirls, Costume, Cover, Masquerade, Recruit, Mirrors, and Facial Signature. Her work investigates human identity and especially gender roles and stereotypes in Japanese culture. [4] [5]

Seian University of Art and Design is a private university in Otsu, Shiga, Japan. The predecessor of the school was founded in 1920. It was chartered as a junior women's college in 1950 and became coeducational in 1993.

Sawada uses photography and techniques of performance art to explore ideas of identity, status, culture, individualism, and conformity through traditional and contemporary cultural methods of portraiture. Sawada's photographs are each part of a themed photo series in which she makes use of make-up and costume to dramatically alter her identity, such that each photograph appears to represent a different individual or group of individuals, when all subjects are Sawada herself. Sawada uses commercial photographers, photo booths, and her own studio environment with digital photo editing to represent hundreds of different identities. [6] Clearly, her use of costume in her self-portraits draws from the work of Cindy Sherman. Her work also explores the way assumptions about personality are largely driven by Japanese cultural responses to gender, job occupation, and other socio-cultural stereotypes. [7]

Cynthia Morris Sherman is an American photographer best known for her iconic portraits that depict women as imagined characters from film and other media.

Sawada's earliest self-portrait photo series is Early Days from 1995-1996 made while Sawada was in her teens. [8] Her next series, ID400, was created over the course of 4 years, from 1998-2001 using a public photo booth to take 400 different ID card style self-portraits while Sawada altered her appearance through costume, hair, and make-up changes along with altering her facial expression or even gaining/losing weight. [9] [10] Subsequent photo series continue to explore varying methods of altering Sawada's outward appearance then documenting these changes using single and group style photographic methods.

For this photo series, Sawada visited the same photo booth outside a train station in Kobe, Japan over the course of four years to create 400 different black and white ID card photos of herself. [9]

Sawada's OMIAI♡ series references the traditional photo book of a young woman used by her family members for an arranged marriage. Sawada was photographed in a professional photography studio. On each visit she dressed as a different type of woman, as the photographs are carefully produced with the intention of showing a woman's identity for the prospective young man and his family. [12]

Photographs in this series show Sawada attired based on trends of the Japanese youth culture and the influence of Western ideas of beauty. [13] She dressed herself as a ganguro, described as a tan, California girl type idolizing the pop music star Namie Amuro. [9]

Sawada dresses in the uniforms and work clothes associated with various jobs. The idea for this series grew from her personal experiences working in different roles and learning how different people responded to her in these roles, "people’s attitude toward another person changes greatly according to their occupation." [14]

This series shows Sawada repeated within the same large group class portraits as both the students and their teacher wearing a school girl uniform and then dressed as the typical school matron. Sawada finds ways of altering her presentation wearing identical school uniforms through changes to her hair style, accessories, and facial expressions, then the images are digitally combined to create the class, including a background. [15]

Daidō Moriyama is a Japanese photographer noted for his images depicting the contrast of traditional values and modern society in post-war Japan.

Nobuyoshi Araki is a Japanese photographer and contemporary artist. He is also known by the nickname Arākī (アラーキー). Araki has published over 500 books. He is known primarily for his photography that blends eroticism and bondage in a fine art context.

Hiroh Kikai is a Japanese photographer best known within Japan for four series of monochrome photographs: scenes of buildings in and close to Tokyo, portraits of people in the Asakusa area of Tokyo, and rural and town life in India and Turkey. He has pursued each of these for over two decades, and each has led to one or more book-length collections.

Nakaji Yasui was one of the most prominent photographers in the first half of the 20th century in Japan.

Chiho Aoshima is a Japanese pop artist and member of Takashi Murakami's Kaikai Kiki Collective. Aoshima graduated from the Department of Economics, Hosei University, Tokyo. She held a residency at Art Pace, San Antonio, Texas in 2006.

Yutaka Takanashi is a Japanese photographer who has photographed fashion, urban design, and city life, and is best known for his depiction of Tokyo.

Hiroshi Yamazaki was a Japanese photographer whose works concentrate on the sun and the sea.

Rinko Kawauchi HonFRPS is a Japanese photographer. Her work is characterized by a serene, poetic style, depicting the ordinary moments in life.

Carrie Mae Weems is an American artist who works with text, fabric, audio, digital images, and installation video, but is best known for her work in the field of photography. Her award-winning photographs, films, and videos have been displayed in over 50 exhibitions in the United States and abroad, and focus on serious issues that face African Americans today, such as racism, sexism, politics, and personal identity.

Miyako Ishiuchi, is a Japanese photographer.

Michiko Matsumoto is a Japanese photographer.

Fiona Tan is a visual artist primarily known for her photography, film and video art installations. Her work is known for its skillful craftsmanship and emotional intensity, which often explores the themes of identity, memory, and history. Tan currently lives and works in Amsterdam, the Netherlands.

Mikiko Hara, born in Toyama in 1967, is a Japanese photographer.

Kansuke Yamamoto was a photographer and poet. He was a prominent Japanese surrealist born in Nagoya, Japan.

Thijs groot Wassink and Ruben Lundgren are two Dutch photographers who work together as WassinkLundgren. Their photography and film projects shift mundane, often unnoticeable, everyday occurrences into visually compelling and gently amusing observations of the world around us.

Osamu James Nakagawa is an American photographer and professor at Indiana University in Bloomington, Indiana known for his work using digital photography while the technology was still in its infancy. He was born in New York City and raised in Tokyo, Japan from the age of one. At 15, he moved to Houston, Texas. He earned his bachelor's degree in studio art from St. Thomas University in Houston, Texas in 1986, and he earned is MFA in photography from University of Houston in 1993. Nakagawa's work is shown around the world. He's best known for his Okinawa trilogy which includes Gama, Banta, and Remains. His other bodies of work include Mado, his window series, Drive in Theater, and May 15s. In 2009, he won the John Simon Guggenheim fellowship, and in 2010, he won the Higashikawa A New Photographer Award in Japan. In 2014, he also won the Sagamihara Photographer of the Year in Japan