Tomonobu Shimizu (清水 智信, Shimizu Tomonobu, born June 28, 1981) is a Japanese professional boxer who is a former WBA super flyweight champion. He is an alumnus of the Tokyo University of Agriculture. [3]

Shimizu had an amateur record of 68–10 (25 KOs). He turned to professional and made his debut in March 2004. He is managed by Kentarō Kaneko's Kaneko Boxing Gym and trained under Kenji Kaneko's guidance. [3]

In April 2007, Shimizu lost to Pongsaklek Wonjongkam in the WBC flyweight championship in Sara Buri, Thailand. Then he captured the Japanese flyweight title in April 2008. After losing his second world title shot against Daisuke Naito at the Yoyogi National Stadium First Gymnasium in Tokyo, Japan, in July of that year, he defeated the interim champion Toshiyuki Igarashi in the Japanese title unification match and defended that title three more times.

Shimizu moved up in weight division and won the WBA super flyweight title with a split decision over Hugo Cázares at the Nippon Budokan in Tokyo, on August 31, 2011. It was presented by Kameda Promotions. [3] At first, WBA's Gilberto Mendoza did not approve this fight. [4] However it was authorized at the last minute. [5] He suffered a fracture of the right orbital floor in that fight. Although it took three months to recover, [6] the prospects for recovery were clear, and Shimizu had started training for the first defense that would take place in around March 2012. [7] Nevertheless, the JBC (Japan Boxing Commission) indefinitely-suspended second Shirō Kameda, and identically the JBC indefinitely-suspended promoter Noriyuki Igarashi (both from Kameda Promotions) [7] requested that the scheduled interim WBA super flyweight title match Tepparith Kokietgym vs. Daiki Kameda would be elevated to the regular title bout at the WBA Championship Committee in Donetsk, Ukraine. [8] [* 1] [* 2] As a result of that, Shimizu was designated as a champion in recess on November 10, 2011. [11]

Shimizu who has recovered from injury enough to do his usual training including sparring, and his manager Kaneko held a press conference on 29 November. Shimizu stated that he would fight against anyone as a champion. The team Shimizu strongly demanded a retraction and complained that the bout between Tepparith and Kameda should be taken place as an intern championship or a title eliminator. [12] Kaneko Boxing Gym submitted a questionnaire with the December 5 deadline to the JBC. [* 3] The team Shimizu mentioned that they would give up the title, if they can not get a coherent answer. The WBA's decision to make Shimizu a champion in recess has been controversial in Japan, and it has been continuously reported in the major media such as three major newspapers. [13] [14] [15] [16] Although Kaneko Boxing Gym were given the almost zero response from the JBC, as the maximum concession, they barely accepted the status quo on condition that the unification match is early implemented. [17] [18] [* 4]

Shimizu fought against Tepparith Kokietgym in the WBA super flyweight unification bout at the Yokohama Arena on April 4, 2012. [* 5] It was staged again by Kameda Promotions who had also had the exclusive promotional rights for the future title defense ahead of Simizu. [21] Shimizu lost there via a ninth round stoppage. [22] After the fight, Shimizu mentioned that he would not waste the last six months where he grew both as a boxer and as a person. [23]

Hiromi Amada is a retired Japanese super heavyweight kickboxer and boxer from Gunma, Japan. A staple in the K-1 heavyweight division from 1999 to 2007, the company considered him one of its most talented Japanese fighters, second only to Musashi. He is also the first-ever HEAT Heavyweight Kickboxing Champion and holds notable victories over Freddy Kemayo, Makoto Uehara, and Rene Rooze. 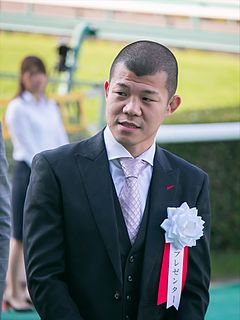 Katsunari Takayama is a Japanese professional boxer. He is a five-time minimumweight world champion, having held the WBC title in 2005, the IBF title twice between 2013 and 2015, and the WBO title twice between 2014 and 2017. He retired as a professional in 2017, as WBO world champion, to focus on participation in the 2020 Olympics, but returned in 2020 after failing to qualify. 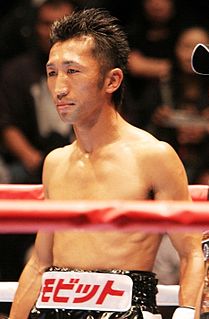 Toshiaki Nishioka is a Japanese former professional boxer who competed from 1994 to 2012. He held the WBC super bantamweight title from 2008 to 2012, and challenged for the lineal super bantamweight title in his final fight. Nishioka is known for his series of fights against Veeraphol Nakonluang-Promotion, with two of their four encounters ending in draws. Unlike many of Japan's other world champions, Nishioka willingly fought outside of his own country. 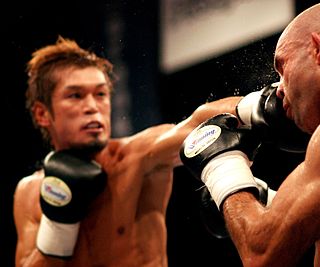 Nobuhiro Ishida is a Japanese former professional boxer. He is a former WBA interim super welterweight champion who is best known for knocking out James Kirkland in a middleweight bout at the MGM Grand Las Vegas in April 2011. Ishida has so far been promoted by Canelo Promotions and Golden Boy Promotions among others and has been co-trained by Rudy Hernández and Daisuke Okabe, while residing back and forth between Los Angeles, California, United States and Osaka, Japan.

Toshiyuki Igarashi is a Japanese boxer and a former WBC, The Ring and Lineal Flyweight World Champion.

David De La Mora Zambrano is a Mexican professional boxer in the Bantamweight division and is the former WBC FECARBOX Bantamweight Champion. 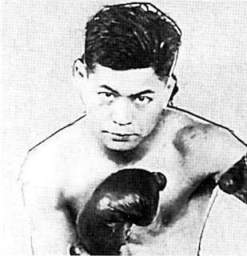 Teiken Boxing Gym (帝拳ボクシングジム) in Tokyo, a Japan's traditional boxing club whose genesis dates back to 1926, manages professional boxers as a member of the East Japan Boxing Association, a subsidiary body of Japan Pro Boxing Association. Currently located in Kagurazaka, Shinjuku, its president is the International Boxing Hall of Famer Akihiko Honda, the representative is Tsuyoshi Hamada, and the long-time female manager is Haru Nagano. In order to distinguish from three related clubs i.e. Osaka Teiken Boxing Gym, Fukuoka Teiken Boxing Gym and Hachinohe Teiken Boxing Gym, it is often referred to as "Teiken (Boxing) Gym in Tokyo" or "Tokyo's Teiken (Boxing) Gym". 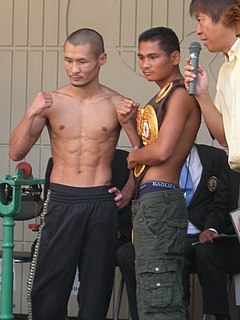 Tepparith Singwancha or Tepparith Kokietgym is a Thai professional boxer in the super flyweight division and was the World Boxing Association (WBA) Super Flyweight Champion from 2011 – 2012. He won the interim title on May 1, 2011 in Phetchaburi, Thailand against Drian Francisco, and was elevated to full champion in November of that year.

Ryōta Murata is a Japanese professional boxer who has held the WBA (Regular) middleweight title from 2017 to 2018 and regained it in 2019. As an amateur, he won a silver medal at the 2011 World Championships, and gold the following year at the 2012 Olympics. As of August 2019, Murata is ranked as the world's sixth best active middleweight by The Ring magazine and the Transnational Boxing Rankings Board, and eighth by BoxRec.

The history of boxing in Japan began in 1854 when Matthew Perry landed at Shimoda, Shizuoka soon after the Convention of Kanagawa. At that time, American sailors often engaged in sparring matches on board their ships, with their fists wrapped in thin leather. It was the first example of boxing conveyed to Japan. In addition, an ōzeki-ranked sumo wrestler named Tsunekichi Koyanagi was summoned by the shogunate, and ordered to fight a boxer and a wrestler from the United States. There were three fought matches, using different martial arts' styles, before Perry and other spectators. Koyanagi reportedly won.

Kiyotaka Shimizu is a Japanese mixed martial artist. Shimizu fought primarily in Pancrase, as well as Shooto and Sengoku.

Kengo Shimizu, is a Japanese middleweight kickboxer competing in RISE. He is the former SHOOTBOXING and RISE Heavyweight champion.

Nadaka Yoshinari is a Japanese kickboxer, and the current Battle of Muaythai Flyweight champion. He is the former Lumpinee, Rajadamnern, IBF Muaythai and WBC Muaythai champion at mini flyweight.