Tomorrow Square (simplified Chinese :明天广场; traditional Chinese :明天廣場; pinyin :Míngtiān Guǎngchǎng) is the eighth-tallest building in Shanghai, China. It is located in Huangpu District, Puxi, close to People's Square. It is about 285 m (934 ft) tall and has 63 floors.

This multi-purpose building contains a 342-room JW Marriott hotel, and 255 executive apartment units. It was completed on 1 October 2003. Starting from a square base, the all-concrete Tomorrow Square tower transforms itself into a diagonal square as it rises to a peak. Engineers of the exterior vertical support system were faced with a unique challenge as a result of this unusual shape. They chose flat slabs for the hotel floors and beam and slab construction for the office floors. A combination of sheer walls and frame action stabilizes the slender tower laterally against wind and earthquake forces. The foundations are 80-meter (260 ft)-long bored piles supporting a column mat.

The Jin Mao Tower, also known as the Jinmao Building or Jinmao Tower, is an 88-story landmark skyscraper in Lujiazui, Pudong, Shanghai, China. It rises 420.5 metres tall. It contains a shopping mall, offices and the Grand Hyatt Shanghai hotel, which at the time of completion was the highest hotel in the world. Along with the Oriental Pearl Tower, the Shanghai World Financial Center and the Shanghai Tower it is part of the Lujiazui skyline seen from the Bund. It was the tallest building in China from its completion in 1999 until 2007, when it was surpassed by the Shanghai World Financial Center which is located close by. The Shanghai Tower, a 121-story building located next to these two buildings, surpassed the height of both these buildings in 2015, creating the world's first trio of adjacent supertall skyscrapers.

The Oriental Pearl Radio & Television Tower is a TV tower in Shanghai. Its location at the tip of Lujiazui in the Pudong New Area by the side of Huangpu River, opposite The Bund, makes it a distinct landmark in the area. Its principal designers were Jiang Huan Chen, Lin Benlin, and Zhang Xiulin. Construction began in 1991, and the tower was completed in 1995.

Millennium Tower is a 35-story, 130.8 m (429 ft) skyscraper in Rotterdam, Netherlands design by WZMH Architects and AGS Architecten. It was completed in 2000. The tower was built on Weena in front of the Central station. It is currently mixed use, the first 15 floors belong to the Rotterdam Marriott Hotel, including 2 restaurant, the other floor are being used as offices. 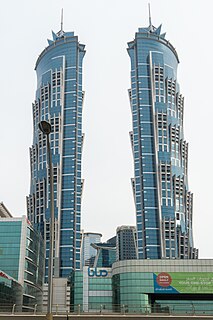 Shanghai Tower is a 632-metre (2,073 ft), 128-story megatall skyscraper in Lujiazui, Pudong, Shanghai. It is the world's second-tallest building by height to architectural top and it shares the record of having the world's highest observation deck within a building or structure at 562 m. It had the world's second-fastest elevators at a top speed of 20.5 metres per second until 2017, when it was surpassed by the Guangzhou CTF Finance Centre, with a top speed of 21 metres per second. Designed by international design firm Gensler and owned by the Shanghai city government, it is the tallest of the world's first triple-adjacent supertall buildings in Pudong, the other two being the Jin Mao Tower and the Shanghai World Financial Center. Its tiered construction, designed for high energy efficiency, provides nine separate zones divided between office, retail and leisure use.

The World Trade Center Abu Dhabi is a complex of two skyscrapers in Abu Dhabi, United Arab Emirates. Construction of these towers was scheduled to end in 2010, though the 2009 financial crisis pushed the project completion date in 2014. The complex includes two malls, and one Courtyard by Marriott hotel. The complex was initially planned to house three skyscrapers, but the 2009 crisis forced the contractors to withdraw construction of the Hotel Tower, the result being two skyscrapers.

The JW Marriott Hotel Shanghai is a flagship hotel of the Marriott Group in Shanghai, China. 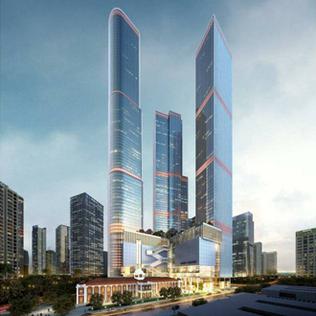 Ice District is a $2.5 billion mixed-use sports and entertainment district being developed on 10 hectares of land in Downtown Edmonton and a portion of the neighbourhood of Central McDougall. Its main attraction is Rogers Place, the home arena of the Edmonton Oilers professional ice hockey team. When completed the area will be Canada's largest mixed-use and entertainment district. The developers of the district are the Katz Group and the ONE Development Group. On July 13, 2015, it was announced that the area of the city surrounding the arena from 101 and 104 Street to 103 and 106 Avenue would be referred to as "Ice District" – a name created by Daryl Katz. 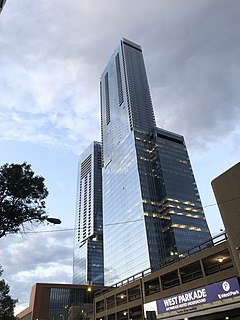 Stantec Tower is a 66-storey, 250.8 m (823 ft) mixed-use skyscraper in the Ice District in downtown Edmonton, Alberta, Canada. As of 23 May 2018, it reached a construction height of 197 m (646.3 ft) and surpassed the JW Marriott Edmonton Ice District & Residences, becoming the tallest building in Edmonton. The office area of the tower opened on September 26, 2018, and the residential portion opened in 2019.

The JW Marriott Edmonton Ice District & Residences is a mixed-use skyscraper in Edmonton, Alberta as part of the downtown Ice District. It is a combination of a JW Marriott hotel in the lower section, with residential condos named Legends Private Residences in the upper section. Construction began in November 2014 and the hotel opened on 1 August 2019. The tower became the tallest building in Edmonton on 3 November 2017 and held that status until it was surpassed by the Stantec Tower in May 2018, en route to topping out its 56th floor at its final height of 192 metres (630 ft) on 20 March 2018.